Home Beyond Fees Must Fall “The Fall” is a fantasy novel set in the middle of #FeesMustFall...
WhatsApp
Facebook
Twitter
Email
Print 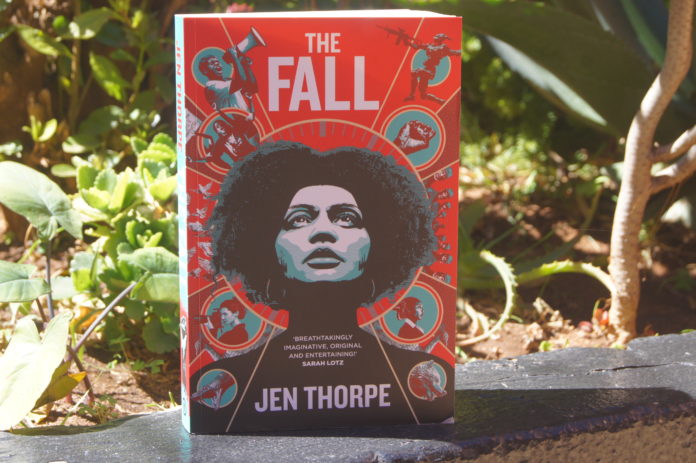 Jen Thorpe’s novel The Fall marries fantasy with reality in a fast-paced mashup. We chatted to Thorpe about her inspiration for the book.

Basis of the book

Set during the Fees Must Fall (FMF) protests of 2015-2016 in Cape Town, the story is centered around figures that made up the FMF movement – students, journalists and the politicians. But if you were waiting for a cameo from Jacob Zuma, you may be disappointed. The characters are portrayed in a way that was definitely not seen during the protests. Slight spoiler but one of the student leaders can see the future. Also, the speaker of the national council of provinces (NCOP) is a mind-reader. And the president is a woman. Instead of building a firepool, she has bought a zoo from the Russians filled with magical creatures. It’s intriguing.

What sparked the idea?

The book starts with Thuli, a student leader telling Helen, a journalist that she has seen a vision of Hector, another student leader dead. This opens a wild ride of a narration. Thorpe says she was walking home from work when she heard Thuli’s voice in her head. Just as Thuli says she can see into the future, Thorpe says she could “see” her book and its story unfolding for her.

Check out this documentary about Fees Must Fall:

In the Harry Potter series there’s the prophecy around Harry Potter being the one to defeat Voldermort. Similarly in this book there is a prophecy that one of the children of the anti-apartheid activists will cause some trouble for the movement. There are political killings and just plain dirty politicking coupled with an ever present element of magic and fantasy. Thorpe says she wanted to reflect the stories of the time but also satirise some of the “dodgy narratives” like there wasn’t enough money for students but there was money for a firepool.

Check out a previous interview with Jen Thorpe:

Speaking to The Daily Vox, Thorpe said her main inspiration for the book were the brave students who led the FMF protests. She said it motivated her to see how passionate the students were but also horrified at the same time by how the students were treated at parliament. At the time, she was working as a parliamentary researcher and was exposed to the protests. That horror that Thorpe felt comes through quite strongly in the book. There is a particularly visceral and devastating scene in the book where the students are hemmed in by the police at parliament. Scenes like that often unfolded in real life during the protests. In the book the police are actually robotic/zombie police created in horrific conditions which makes the scene all the more chilling.

What the book tackles

Thorpe says the FMF protests were a vital moment in South African politics. “These are like the brightest people in the country, the people who were able to overcome a really poor education system and get into university, and there were still systemic barriers to keeping them out,” she said. The movement also represented a struggle between different generations. Thorpe portrays this through the strained relationship between the minister of police and her daughter who is leading the protests. The minister is tasked with stopping the protests placing her in direct confrontation with her daughter.

Gender-based violence is a big issue

Thorpe says she wanted to look at the movement which was for liberation on hand but was still complicit in silencing the voices of women. In many instances during the protests, women leaders were silenced or spoken over by the male leaders. There were also too many reports of gender-based violence during the protests. Hector represents that struggle between the “good man” caught in the patriarchal system and how often it’s those who kept silent can cause the most hamr.

“I don’t think that it’s possible for me to write stories about women in this country without reflecting the violence that they have to endure and navigate,” said Thorpe.

What does it mean to release the book during a pandemic?

It was likely impossible for Thorpe to have imagined her book would be released during the middle of a pandemic. But in a way the book tackles many of the issues the country is currently facing. She says her book is relevant because it asks the reader to question the obvious story whether it’s presented by the government, activists or the media.

“South Africa has a very strange tendency to exceptionalism and “this moment” narrative that now everything’s going to be different, and everything’s going to change,” said Thorpe. She added that she wanted to show how things might appear to have changed but that it’s still the same people pulling the strings.

The final pages of the book slows down the story slightly but it’s not less thrilling. The ending of the book will also leave the reader begging for more. The story seems far from finished with many loose ends needing to be tied up. There is hope that Thorpe will write that sequel. It will definitely be thoroughly welcomed.

The Fall is published by Kwela Publishers and is available at all good bookstores and online.