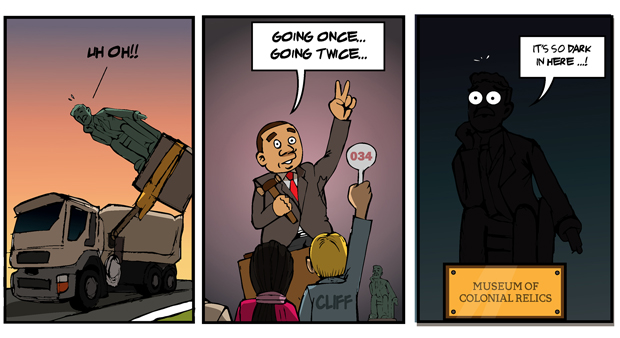 The University of Cape Town (UCT) Senate has backed the removal of the statue of Cecil John Rhodes from its place of prominence on campus, and the UCT Council is set to take the final decision on Wednesday, but what will happen to it next? RA’EESA PATHER rounds up some of the options that UCT VC Max Price outlined in his hangout with The Daily Vox last month. It might seem a little strange to turn the statue around, but according to UCT vice chancellor Max Price, one view doing the rounds is that Rhodes’ brooding figure should face the university’s Jameson Hall instead of the wide expanse of Cape Town.

“It’s a group that says what Cecil John Rhodes wanted was a university that would be for white people, primarily, that would reflect a colonial project that he had driven, and look what his land and money has achieved: a university which is predominantly black,” Price said.

The argument is that the diversity of the university, which Price says is “transforming, not yet transformed” is perhaps a “victory over what he wanted”.

But would students sitting on Jameson steps like the idea of being surveyed by Rhodes each day? Going once, going twice, and sold? According to Price, some people have argued that the statue be auctioned off and that the money raised be put towards student financial aid. Someone has already jokingly auctioned the statue off on South Africa’s popular online site Gumtree, but nobody took the sale seriously. Shem.

Would you do Rhodes’ bidding?

3. Take it off campus Students within the Rhodes Must Fall movement have ardently campaigned for the statue’s removal from campus grounds. Its removal from the university would ensure that “students who find it hateful would not ever have to confront the statue”, Price says. As yet, it is unclear where the statue would be taken if it were to be removed completely. But the statue also forms part of the campus’ history and some people feel it should remain in some capacity, which leads us to…

4. Hide it on campus Some people have argued that the statue be “put into a museum on the campus where it’s sort of hidden and you’d have to go find it”, Price explained. This way, it would still be around for those who feel strongly that it should remain, but without the position of prominence that it now commands. But would anyone go looking for it once it’s been tucked away? Price says that in his personal view, the statue would remain on campus but be moved into a space that is not a “pride of place” as it is now, and where counter-narratives can be created to “speak back” to the statue.

“It should be on the campus – but in a place that can be constructed as an educative space, a space of memory, a space where other statues, other narratives can speak back to the statue,” Price said.

Instead of trying to “balance” the statue by putting it across from statues of struggle heroes such as Nelson Mandela or Walter Sisulu – a move that would would imply that they were somehow equal – more abstract sculptures could be created to memorialise the atrocities of Rhodes’ rule, such as the Glenn Grey Act which was a predecessor to the apartheid regime’s Group Areas Act. This would acknowledge that while Rhodes did donate the land the university stands on, and was a philanthropist, his wealth was built on suffering and injustice.

Do you have any ideas on what should happen to Rhodes’ statue? Share them with us below.