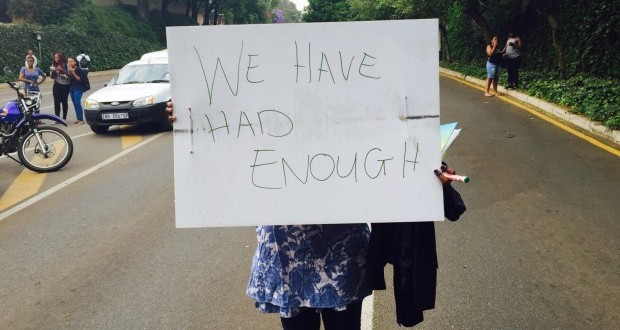 There is a tendency in the media and within our academy (at times there isnâ€™t a difference between the two) when characterising the #FeesMustFall movement to focus solely on fees. Even this focus never gets anywhere beyond issues of whether the state can afford what students are demanding and whether there should be students who pay if they can afford.

Though these questions could have had significance in earlier debates amongst political parties, they are deeply out of sync with what students are currently raising. Such is the case of the recent yet archaic and bizarre argument put forth by Professor Snodgrass in her article titled â€œDeepening inequality is the high price students will pay for free educationâ€ which appeared in The Conversation.

Snodgrass seems to believe that fees decreasing will increase inequality, perhaps trumping the argument that access to higher education can narrow the gap between the haves and the have nots. She puts forth that the kind of inequality is not only quantitative but qualitative â€“ that fees decreasing results in the decreasing of the quality of the education as resources are channeled away from teaching and learning projects to fill the access deficits. She does this relying upon some behaviourist theories about resource scarcity.

According to her â€“ democratising higher education and making it accessible will render the academy non-operational and unable to pioneer progressive pedagogies. As if the academy will now be deprived of its well of western-pedagogical water, leaving it malnourished and ultimately, void. Now this presupposes that higher education cannot survive without a western ideological underpinning. This is also evidenced in her quoting of some vice-chancellor from some Cecil-Rhodes-Statue-Harbouring University in the land of the chief colonisers.

We find it ironic how the same scarcity mind-set she seemingly denounces is the same thinking she chooses to employ when thinking about the decolonial project. So myopic is her outlook, that she negates the all too important fact that higher education in 2016 serves only as a repository to the exploitative white capitalist system that has in fact created and sustained the structural inequality in South Africa. This system has also created and maintained the high levels of mediocrity in white academia â€“ what is indeed scarce in the academy is intellectual depth if your faux-article is anything to go by. The real scarcity argument that we should be having is that of you giving back our land as well as our economy.

A reminder to Snodgrass and the like is that the much-talked-about but never implemented guiding document of the vanguard liberation movement, the African National Congress, which is now in government, the Freedom Charter demands that â€œEducation shall be fee, compulsory, universal and equal for all children.â€ This is further reiterated in the Constitution of the country and it must be noted by Snodgrass that this is not qualified by â€œavailable resourcesâ€ or â€œprogressive realisationâ€, but rather as an immediate right of which the government is responsible for realising, not in the future but NOW!

The real problem here is not that free education will impose critical limitations on universities’ academic projects, as that is not the case at all, nor can Snodgrass go on to provide empirical evidence to support her bizarre claims. What has become a grave danger to education in South Africa is that it has been allowed to be shaped by the demands of a neoliberal â€œdevelopmentâ€ approach where a great deal of emphasis has been placed on being â€œinternationallyâ€ competitive, with emphasis on maths, science and technology to develop requisite “productive skills” for the “jobs market”, and the imperatives of fiscal restraint expressed as cost-containment measures and the increasing marketization of education which is a major contributor to the high levels of inequality as noted by activist and academic Salim Vally in his Citizenship and Childrenâ€™s Education Rights in South Africa paper published in 2004.

The content of Snodgrassâ€™ piece is not worth a response but what necessitates this is the act of speaking over and about students without any engagement with the voice of students. Snodgrass writes as though we are based in some inaccessible rain forest where not even the might of telecommunication can reach us. Unlike her American counterparts who have been harassing us with emails, phone calls and their prestigious visits to understand #feesmustfall, she would rather think up these students, give them a character and proceed to write about their violence as seen in a previous piece and their self-defeating narrow mindedness observed in this one. Much like those who study Africa but refuse to let Africa speak – thus being learned about Africa but learning nothing from it. We do though wish to announce the obvious to Snodgrass and co â€“ we are here and are offering lessons on the philosophy of fallism for free.

We write to call out the refusal to see students as thinkers capable to not only contribute to but lead intellectually. We write to challenge what only stands on institutional authority not on any academic or philosophical rigour. We write to end the colonial project that persists in the South African academy. We write to give attention to the festival of mediocrity that white academics are having. For Snodgrass, who seems to have missed the need, role and importance of a movement as that of #FeesMustFall in bringing forth much-needed debates and action around decolonisation, may this response to her wishy-washy piece serve as an introduction to the movement and the philosophy of fallism.