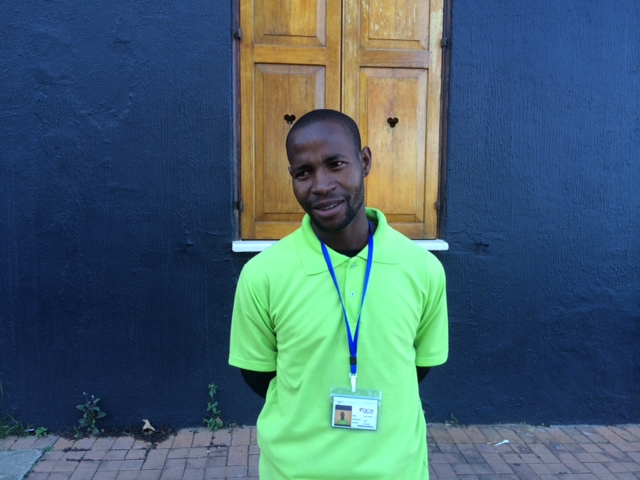 We are living in a technological age, a time when the world is getting smaller and more accessible to more people with each passing day. But in the heart of Johannesburg, 20 years into our democracy, AAISHA DADI PATEL finds that democracy hasnâ€™t changed much of the way people move around the city. The spatial realities of the city remains one of the abiding challenges of transformation. â€œI stay in Soweto and I work six days a week. I use Metro Rail, and have practically been using it since I was born. I find that itâ€™s cheaper than using a bus and a taxi; I pay like R160 for the whole month. A bus fare would be about R300, and maybe taxi is around R450.
We can’t choose jobsâ€¦ Theyâ€™re so scarce, we just want to survive. This is just a temporary job – I have matric, and I want to make enough funds to get a driverâ€™s license or go to collegeâ€¦ I want to study fine arts but right now Iâ€™m trapped and canâ€™t move anywhere. We didn’t know about opportunities when we were at school and we can’t blame our parents for it, but now we get stuck because what else must we do, where else must we go?
Itâ€™s been 20 years, transformation should have occurred by now… I mean, with the trains, they are still using old machines, there are engines everywhere at the station just laying around, we always get stuck, people steal cables, sometimes the train is not on time. But we wake up early and see whatâ€™s happening and make a plan to take a taxi or whatever if we have to, and we don’t complain.â€ C.Mhlongo, 43, Cleaner
â€œThere’s no change from my side, really. I stay in Alexandra, it’s a very corrupt place, there’s no change; we donâ€™t have anything nice there, there’s nothing nice about it at all. I work in Braamfontein as a cleaner at Pikitup under contract. Before, the government said that contracts wouldnâ€™t be a thing anymore, but there’s no such thing, we still have it, I’m under contract for 8 years now and it gets renewed every year. I come far everyday, Monday to Friday I use the taxis. It costs me about R480 a month – R22 a day to go and come. Maybe it doesnâ€™t sound like a lot but it affects me a lot because my salary is only R2000 a month.â€ â€œI use taxis to get around but they have a lot of issues; some of the vehicles aren’t up to par, then inside the taxi doors won’t work, seats are brokenâ€¦it becomes an issue of safety. Theyâ€™re reliable in terms of going from place A-B, but overall I wouldnâ€™t call them reliable. I think transport is a major issue in our country at the moment, and the sad, negative thing is that people are comfortable that things aren’t up to par and donâ€™t think thereâ€™s anything wrong with it. Even Metro Buses are restricting in their own way; you know, yes we have options, but you settle for what you have and know.â€ â€œI use the Metro Bus everyday and I would say that mostly itâ€™s reliable, but I prefer using a taxi because the bus is sometimes late and then that interferes with my timetable. But I donâ€™t know what can change, I donâ€™t think these things will ever change.â€ â€œIn 20 years, nothing has changed, it’s become worse. If you look at South African roads, you can’t even go anywhere in peak hours. During the busy time, unless it’s after seven, highways are a no-go area and so many other places too; traffic officials are not always there to help, and we battle to get through intersections.

Everyone’s got a car and there’s times we can’t even drive, just have to park the car and wait. I am scared of etolls so I don’t even go on the highway, I don’t have an etag so it will be an issue if I do.
Iâ€™ve been a taxi driver for 6 months now. This is my car. This job is better than my old job â€“ I was a driver in the tyre industry before, making like R340 a day. Now I make R600-R700 a day. Working harder, I was wasting my time.â€