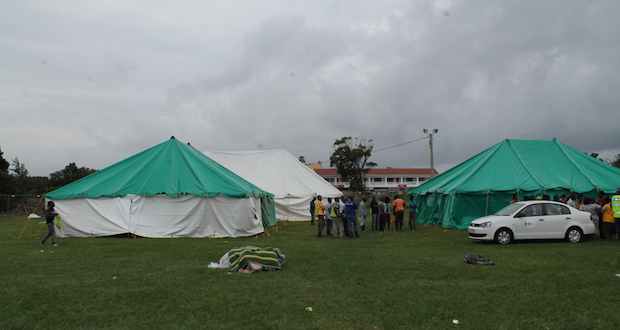 Last week, the army was deployed to support the police service in parts of Durban and Johannesburg following an outbreak of xenophobic violence. At least seven people have died and many more have been injured since the beginning of the attacks, which started in Isipingo. QINISO MBILI visited the Isipingo camp for displaced foreign nationals to find out what people thought of the deployment of the army into civilian spaces.Â Mwenze Guerschom, DRC, student, 22
This army deployment will not help with anything. It cannot assure us victory. I havenâ€™t heard about any army in Isipingo also. I donâ€™t understand which parts of KwaZulu-Natal they were talking about but I know Isipingo should have been one of them. This is where most of it started. The army is not the proper way to resolve this. The government needs to teach the South African people that foreigners are people too. The army cannot cover every corner. Elvira Munezero, Burundi, salon owner, 38
I think this deployment will only amplify the violence in areas where there is no army and the army cannot be everywhere. The foreigners are too few and there are so many locals that want us out. It is impossible to safeguard us effectively. The government needs to focus on reintegrating us smoothly into communities. Simply stopping people from attacking foreigners doesnâ€™t mean they have stopped being xenophobic. Then what will happen when the army is gone? What I have realised here is that even the government doesnâ€™t want us here. When we come into the country we are given permits to work and study. But it is so hard to get into these institutions as a foreigner. Roger Bitama, DRC, clothing shop owner, 45
We just have to wait and see. I donâ€™t know if the army will help or not but what I know is that xenophobia will not end. There was xenophobia in 1998, it returned in 2008 and now itâ€™s back again. This means something is wrong and that cannot be fixed by the army. This also means that if we survive this wave of xenophobic attacks and continue to stay in the country, we have to prepare ourselves for another one after a few years. Emile Ntahonvukiye, Burundi, driver, 35
In 2008 when the xenophobic attacks were sparked, the army was deployed but it didnâ€™t help. I am very disappointed in South Africans right now. I have been living here for 12 years and have never done anything wrong to South Africans. It is sad that they have to hate me so much that I have to be protected by the army. It shouldnâ€™t have gotten to this. The army should have been deployed a long time ago, it is sadly too late now. Too many lives have been lost. Adele James, South Africa, teacher
I am not sure if the deployment of the army is going to help much. But I have some Zimbabweans living on my property and they say itâ€™s easier for them to sleep now knowing about the presence of the army. It shouldnâ€™t have gotten to this stage anyway. Why should we need an army to protect Africans from one another? No one deserves this.

– Voxes have been edited for brevity and clarity.
– Images by Qiniso Mbili.