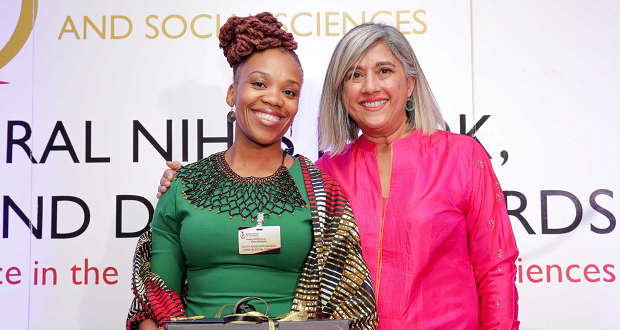 Humanities is often looked down on in comparison to Science, Maths and Engineering. But the National Institute for the Humanities and Social Sciences (NIHSS) hopes to change that by celebrating excellence in these fields with their inaugural awards. Dana da Silva spoke to BUSI PILANE from NIHSS about their role in society and why they should be celebrated more.

NIHSS hosted their inaugural awards on Thursday 31 March to celebrate the contributions made in the humanities and social sciences fields by South Africans. “These awards are to recognise those who â€œhave undertaken the necessary work to create post-apartheid forms of scholarship, creative and digital humanities production,” said Busi Pilane, the senior communication and marketing manager at NIHSS. With these awards NIHSS recognises the work that often goes unnoticed in academe and society by looking at the works of authors, playwrights, poets, artists, curators and publishers.

These people are often at the forefront of creating work that encourages discussion and interrogates the way societies function. “Our hope is that with these awards, we will begin to reimagine and ignite the true status of the HSS [humanities and social sciences] in South Africa so it occupies its rightful position,” she said.

All these winners made their contributions to HSS in various ways. Dlamini’s Askari, explores the ways in which a number of black people were co-opted and coerced into collaborating with apartheid forces by focusing on the story of one of South Africa’s most famous turncoats. Nirma Madhoo created a digital technology fashion film called “Future Body,” which explores digital aesthetics, where the human body performs in hyper-reality.

Humanities does have a larger role to play in society, said Pilane. It helps to create responsible and ethical citizens as “the various disciplines in the field address the myriad aspects of human existence,” says Pilane. Basically, it does this by encouraging critical thinking and deepening our understanding of ourselves as part of society.

If it is so important, then why is it looked down on? Pilane says that over time, the country focused its attention on other disciplines known as the STEM disciplines (science, technology, engineering and maths). This was to address shortages of skills in these fields so that South Africa could be part of the global information age.

This, however, happened at the expense of the humanities and social sciences which became neglected. “HSS gets side-lined or ignored because such contributions don’t resonate with the dominant, yet subtle, process of the commodification of knowledge that is widespread globally,” said Pilane.

But don’t fret. Pilane said that there is still a strong case for the role of HSS.

“We firmly believe that an increase in excellent academic research and debate about the crucial social issues that face us as citizens will help us to tackle our country’s challenges in a holistic manner and head-on,” she said.

So what does all this tell you? While Humanities isn’t everyone’s preferred choice, it can still provide you with a different way of thinking and useful skills for the outside world. Maybe then you can win yourself a NIHSS award.