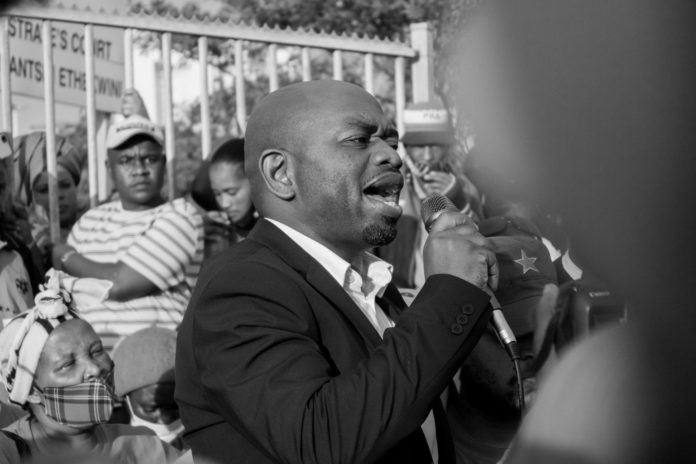 Thapelo Mohapi, the former general secretary of Abahlali baseMjondolo, the shack dwellers movement spoke to us about their members who were in police custody. Mqapheli Bonono, the deputy-president, Siniko Miya and Maphiwe Gasela are currently facing charges of conspiracy to commit murder.

Mohapi spoke to The Daily Vox from outside the Durban Magistrate’s court as he and other members of Abahlali baseMjondolo awaited the details of the bail hearing. (This was on May 17)

“So today Mqapheli Bonono will be appearing for his bail hearing for these trumped-up conspiracy to murder charges he is facing. We know that the State is opposing bail but the state has no basis for what they are saying. At this point in time, there is no evidence that there is a conspiracy to commit murder.”

Read more: How Abahlali Basemjondolo are trying to improve the lives of shack dwellers

“This meeting was held on March 21 in our offices in a public meeting. Who plans a public conspiracy to murder people. The meeting was open to all community members to find out what had happened in the branch after the arrest of the chairperson on murder charges. So Bonono was on a fact-finding mission and that’s what the state is calling a conspiracy to murder.”

Bonono and the others were arrested for organising a meeting at which an alleged murder plot was discussed to kill a local community activist.

“Abahlali baseMjondolo is a grassroots democratic social movement of the poor. We are the largest social movement to have emerged in the post-apartheid South Africa. The movement fights against evictions, for land and for better housing and the dignity of the poor. We are saying that the poorest of the poor and the marginalised – their rights must be recognised. They have not been recognised as human beings. Their humanity has been destroyed by the current ANC government.”

Abahlali baseMjondolo is a shack dwellers’ movement which campaigns both against evictions and for public housing. The movement started in 2005. Recently, the movement’s president, S’bu Zikode was awarded the Per Anger Prize for 2021 by the Swedish government. The Per Anger Prize is the Swedish Government’s international prize for human rights and democracy. It was established in 2004 in recognition of diplomat Per Anger’s efforts during the Second World War, when he saved Hungarian Jews from the Holocaust.

Read more: The Steep Price Of Being Family To Abahlali’s Most Famous Activist

“In giving this award, the government of Sweden said they are honoured to give this award to a movement of our calibre. We’re a movement that has faced 15 years of repression, attacks and even murders of activists. We know that these attacks come as a result of that. We are being persecuted today because an internationally respected government has recognised us as a movement that continues to fight against injustice.”

While Bonono, Miya and Gasela have remained in custody on the charges, many organisations from around the world have pledged their support for the movement. These organisations and individuals have called for the persecution of Abahlali baseMjondolo to stop.

“We respect our justice and judicial system. We’ve won many battles in court against evictions carried out by the city of Durban. We will not allow the justice system to be used for political reasons. The justice system must investigate and then arrest, not arrest and then investigate.”

The movement has also pledged support for the people of Palestine.

“The people of Palestine are us. The persecution we are facing here is the same persecution the people of Palestine are facing. The blood being poured in Palestine by the atrocities being caused by the Israeli Zionist attacks means that we are also under attack. We are saying this must stop. When we are in a struggle and being attacked, comrades from Palestine will make a call. Their struggle is our struggle and the pain they are feeling is our pain – just like they feel our pain when Abahlali is under attack in South Africa.”

Read more: 5 ways to help the people of Palestine