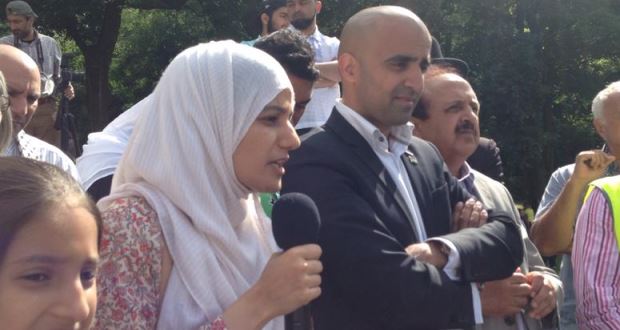 Two decades of conflict have meant hardship for women in both Indian- and Pakistan- administered Kashmir, but there are success stories as well. FARZANA YAQOOB, minister of social welfare and womenâ€™s development in Pakistan-controlled Kashmir, shares her political journey with Rifat Mohidin.

I belong to a political family in Ali Sojal village, in Rawalakot district.

In the 1980s, my mother won the local body elections and became a councillor, so the joke in the family is that she started this journey in politics for women in our family.

My father is also a very liberal person. Heâ€™s always treated his sons and daughters as equals. My father has contested elections several times and won in 2001. The whole family participated in his campaigns.

In 2011 my father became president of Azad Jammu and Kashmir (AJK). When an elected parliamentarian becomes president he has to vacate his seat in the parliament and elections are held to fill the vacant seat.

When my father had to vacate his seat, everyone thought that my brother should contest the by-elections but my mother and sister thought it should be me. The party leader, the then president of Pakistan, Asif Ali Zardari, also suggested that I should contest theÂ election.

I was in living in Switzerland at the time with my husband and kids, after having graduated from Punjab University in 2000. It was the 27th of Ramadan, an auspicious day for Muslims, when my father called me and asked me if I wanted to contest the election. My response was â€œAbiÂ (father), when should I come?â€

I started packing immediately afterwards. My son was four and my daughter was three. We came to Pakistan, I contested elections and we never looked back. Abi even jokes today, he says: â€œFarzana, you did not give me time to have second thoughts.â€

The election campaign was an extremely tough exercise because you have to meet people all day, listen to their grievances and try to satisfy their questions. You travel in jeeps through rough terrain and have to go up and down the mountains. It is physically demanding.

My brother Fahad was with me throughout the campaign. He worked harder than me. We used to be out meeting people for 12 hours straight. When we got home, I would spend some time with my children but Fahad would start planning the schedule for the next day. It was a real struggle.

The local media was against me at first. They did not like that I was the first woman in the Poonch district contesting elections or the fact that I come from the Sudhan family, from one of the Pashtun tribe. All my opponents were men, and it set me at a disadvantage. But I managed to win, and I gained their respect.

After winning, I took the oath as minister of social welfare and womanâ€™s development in AJK. I am also the chairperson of the Rawalakot City Development Project, which oversees development works in Rawalakot. This is the first time in theÂ history of Kashmir that there is a female chairperson.

I represent Kashmir at international forums and I was the first Kashmiri minister to have addressed the foreign ministers conference at the Organization of Islamic Cooperation.

My portfolio, which is social welfare and womenâ€™s development, is close to my heart. I have learned a lot during these years as minister, including the ins and outs of the bureaucracy, the rules and regulations for development projects, and how to lobby for and get legislation approved. The women in our society are oppressed and lack job opportunities. We have successfully passed laws against domestic violence and against sexual harassment in the workplace, and weâ€™re now forming working groups with government and NGOs to focus on implementing these laws. We are also trying to increase job quotas for women in order to address unemployment.

In Kashmir, women do not get their due share in property. Islamic marriage contracts, known as nikahnama, are supposed to empower women and protect their rights but many people break their contract, leaving women vulnerable. We have a long way to go in addressing this.

My experience has taught me that women are very strong. Their pain and misery makes them powerful. Women excel when they get the opportunity. They are not just homemakers but breadwinners as well.

â€“ As told to Rifat Mohidin

This story is part ofÂ a special series by Rifat MohidinÂ on women inÂ administeredÂ Kashmir, their realities, their successesÂ and their challenges.