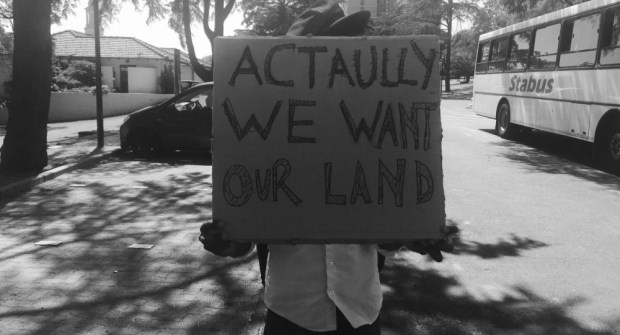 Julius Malema, Commander-in-Chief of the Economic Freedom Fighters (EFF), frequently gets into trouble for inflammatory statements encouraging supporters to occupy white-owned land. His comments at a party meeting in 2014, when he urged his supporters to invade unoccupied land, landed him in court for contravening the Riotous Assemblies Act.

The EFF are the most vocal political party in South Africa about the question of land. In their political manifesto, the EFF propose that all land should be transferred to the state without compensation. Once the state owns the rights to all the land, those who are using, or want to use, the land should apply for licences. There must be a purpose for the land and licences will be granted for a maximum of 25 years, which is renewable if the land is used according to the plan. No-one should be allowed permanent ownership of the land as this leads to â€œcounter-developmentalâ€ privatisation of publicly owned entities. The state owns the rights to confiscate and reallocate for public purposes.

A further recommendation, in line with the Freedom Charter and new vision of agrarian revolution, is that the state should extend implements and services to ensure productivity of land use.

Malema is not the only one concerned about the land. Whispers of â€œIzwe lethuâ€ (Our land) permeate the conversations of many young black South Africans and pepper the struggle songs sung by activists on the picket lines.

According to EFF researcher, Lubabalo Ntsholo, writing in the Daily Maverick: â€œThe elevation of the land question among many young activists today emanates from a deep sense of continuing injustice of exclusion.â€

What has exclusion got to do with the land?

It all dates back to 1913, when the Natives Land Act was passed. According to Dr Ernst Marais, senior lecturer in Private Law at the University of Johannesburg, the Act formally divided South Africa into â€œblackâ€ and â€œwhiteâ€ areas. Marais used the term â€œblackâ€ to refer to all people who are not white.

In the foreword of journalist Sol T Plaatje’s book, Native Life in South Africa, writer Bessie Head wrote of the Native Land Act: â€œIt is possible that no other black legislation has so deeply affected the lives of black people in South Africa. It created overnight a floating, landless proletariat whose labour could be used and manipulated at will, and ensured that the land had finally and securely passed into the hands of the ruling white race.â€

â€œThis Act, along with numerous other acts, formed the basis on which spatial apartheid was built, as it was impossible for non-white persons to obtain ownership of land in areas designated for white occupation,â€ said Marais.

But itâ€™s way more complex than that…

Professor Ben Cousins, National Research Foundation chairperson in the Institute for Poverty, Land and Agrarian Studies at the University of the Western Cape, said that land is inextricably tied with class and race. Writing in the Daily Maverick, Cousins said: â€œIf the nature of the South African economy in general, and of the agricultural economy in particular, cannot be understood without consideration of racial oppression, then it is equally true to say that racial inequality cannot be understood apart from the class dynamics of capitalism.”

“These two dynamics are inextricably intertwined, and in South Africa tend to â€˜co-produceâ€™ each other.â€

Ntsholo agreed that there would be no need for land reform in South Africa, â€œwere it not for this history of dispossession.â€ He said that the primary issue that the land reform discourse needs to deal with is â€œthe question of the return of land from minority white to majority blacks.â€ It needs to be swift, radical and uproot the interests of minority white landowners if it wants to be successful, said Ntsholo.

What is land reform?

Land reform can be explained using three pillars which are provided for in section 25 of the Constitution: improving security of tenure, restitution of rights in land lost after 1913, and redistribution of land.

Cousins defined land reform as: â€œTransformation of the ownership and forms of land tenure in relation to mainly rural land in South Africa but also to some extent, in relation to urban land as well.â€

â€œIt involves restitution of land to those who were deprived of it through racially discriminatory laws and practices after 1913 when the Land Act was passed. Secondly, land redistribution to try and create a more equitable pattern of land ownership across the country, particularly in racial terms. And thirdly, tenure reform. In other words, upgrading the legal rights to land particularly for those living on farms, for farm workers and labour tenants and in communal areas,â€ he told The Daily Vox.

Why is land reform so important in a South African context?

Cousins told The Daily Vox that land reform could reduce poverty and inequality.

â€œGiven our history of land dispossession stretching back over centuries, itâ€™s clear that changing land relations in favour of the privileged and disadvantaging the majority has played a key role in creating a deep-seated structure of poverty and inequality in our country. And so, in a way, itâ€™s trying to address some of the root causes of some of these major problems besetting our society.â€

In an article for the Huffington Post, associate law professor of the North West University, Elmien du Plessis questioned whether it was a mistake to exclude the land and property question in the Truth and Reconciliation Commission (TRC).

The TRC was the tribunal assembled in South Africa after 1994, where victims and perpetrators of violence in the apartheid regime could be heard and request amnesty for their crimes.

â€œThe TRC process chose to focus certain kinds of violence: on bodily harm, death and murders, for instance; but not on the violence of evictions and dislocation and a loss of place. These were to be dealt with in separate land reform programmes that did not require any kind of testimony or acknowledgement from people that benefited from apartheid’s thousands of land acts and ordinances.â€

Spokesperson of the Social Justice Coalition (SJC), Axolile Notywala, also said many of the issues that plague South Africa can be solved through land reform.

â€œItâ€™s important because if you look at the current situation of the majority of people living in the informal settlements, for example and some of the issues that relate to housing can be addressed through land,â€ Notywala told The Daily Vox.

The SJC is a grassroots social movement dedicated to the advancement of the constitutional rights to life, dignity, equality, freedom and safety for all people – but especially those living in informal settlements across South Africa.

Can Malema take back the land?

Cousins says Malema cannot, strictly speaking, take the land. This is because the law, specifically those around protection of property rights, prevents him from doing so. However, on unoccupied state land (not private land), many informal settlements have been established and the argument can be made that they have nowhere else to go.

â€œIf the EFF let land invasions on state owned land, itâ€™s possible that some of those would be regularised by the law,â€ Cousins said.

â€œOf course there are anti-land invasion units like in Cape Town who say that you canâ€™t just take any land. Most land is earmarked for development and there are long queues to acquire it. If delivery is slow, the legitimacy of an occupation will increase.â€

This is the first instalment in a two part series looking at the land question in South Africa. You can read Part 2 here.Â