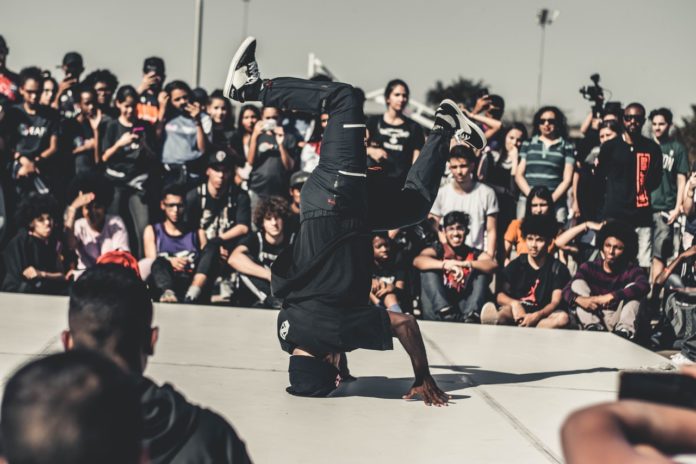 Hip hop is commonly and incorrectly often just referenced as rapping. Rap forms part of it but there are many other elements it encompasses. It has its origins in the 1970’s in the boroughs of New York City. Hip hop is a lifestyle and subculture with key elements. These are MCing/rapping, scratching on turntables, graffiti writing and break dancing and beatboxing. The Daily Vox team examined the intersections of this cultural movement.

Beatboxing is often referred to as the fifth element of hip hop. It involves mimicking drums/percussion by using your voice, lips, mouth and tongue. Beatboxing has its roots in the United States almost 80 years ago. In the jazz era, many artists used their voices and vocal chores to imitate instruments. It became the norm for jazz singers to make noises, moan or grunt during their songs. This was one of the first modern vocal percussion methods that later became known as beatboxing.

Breakdancing and/or breaking or b-boying and b-girling will be an Olympic sport in 2024.

Breaking is a street dance known for its athleticism and flair. It is set to hip- hop music that has drum breaks and breakbeat music. It also originated on the streets of the States. Through the years, it has been enveloped into all types of music that have specific tempos and beats. A practitioner is called a b-boy, b-girl, breakdancer or breaker. Four elements exist in breaking; toprock, downrock, power moves, and freezes.

Toprock are steps performed from a standing position. Downrock is floor movements with the hands supporting the dancer as much as their feet. Power moves are acrobatic; here the breaker is supported by the upper body while the lower creates circular movements. Freezes are poses where the breaker suspends off the ground into freeze poses.They are used to emphasize strong beats and signal the end of a breaking set.

Modern graffiti spread from the New York city railway system in the early 1970s.  It has been in existence since ancient Rome, Greece and  Egypt. Graffiti is often seen as  controversial.  Graffiti writing and drawings are made on walls and surfaces, often with no permission within public view. It can take the form of written words or OTT paintings with elaborate designs. Worldwide marking property without permission is considered vandalism.

Turntablism also emerged in the late 1970’s within African-American inner city hip hop culture.To understand it is to first understand what a break is. It is the second long interlude where all music stops except the drums. The turntablist then extends the beak by having two of the same vinyl record playing, and switching between the two.

The invention of the breakbeat is generally accepted as the foundation element of hip hop. Turntablists manipulate records on one or more turntables. They stop, slow down, speed up, spin the record backwards, or move the turntable platter back and forth.

Rapping is perhaps the most visible and notable element. The term MC originated in Jamaican dance halls.The master of ceremonies would introduce each musician in a rhythmic style. The term stayed in the lingo of those who had moved to the states as the culture was emerging in the 1970’s. The MC’s then started rhyming to breakbeat records creating rap music. An MC rhymes verses that have been previously written or freestyles lyrics.

Rapping is spoken word poetry in time to a beat. It can be delivered over a beat or without. Rap weaves between speech,poetry, and singing.