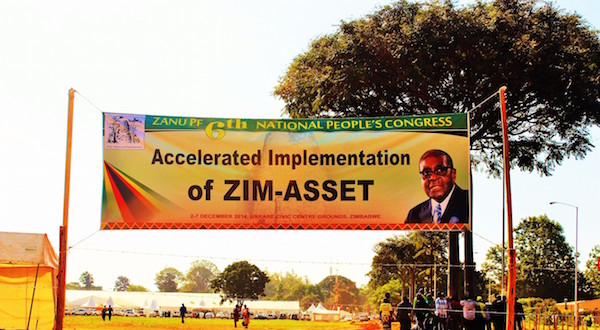 Harare, Zimbabwe – A group of people walk on a dusty path with their backs to the rows of white tents where 12,000 members of Zimbabwe’s ruling Zanu PF have gathered for the party’s Sixth National People’s Congress. As they approach, a woman a half step ahead, wrapped in a bright yellow cloth stamped with the president’s face, tersely shouts, “Pamberi naAmai Grace!” (Forward with Mother Grace) and the group responds, “Pamberi!” (Forward) in praise of Grace Mugabe, 49, wife of President Robert Mugabe.

“We want to see our mother at the top and Mujuru gone; she [Mujuru] wants to remove Mugabe from his seat, but he is our ruler and our father. She must go!” said the lead chanter, Mary Mashonganyika a 43-year-old market vendor and district coordinating committee member from Mvurwi, a small town in Mashonaland Central province, 102 km north-east of the capital.

Bussed in from afar, Mashonganyika like many others have gathered for a congress intended to make some important decisions about Zanu PF’s future leadership and to rout out divisive figures, including the second secretary and vice president Joice Mujuru, 59, who has been accused of plotting against Mugabe.

The president’s shocking assertions against his deputy have become more menacing in recent weeks. Isolated and in danger of losing her post as second secretary, Mujuru has been threatened with possible arrest.

She is currently facing multiple allegations of abuse of office and is under internal investigation for allegedly using her position to bypass paying import duties, bribing party members during Zanu PF elections, and extorting 10% equity from foreign investors. Mugabe is seeking re-nomination as the Zanu PF’s sole presidential candidate in the 2018 national elections. The veteran liberator is also due to select a national party chairman and two second secretaries, one of whom could serve as the country’s second vice president.

Alex Magaisa, a lecturer in law at the University of Kent in the UK and former senior advisor to opposition leader Morgan Tsvangirai, told the Daily Vox that while Mujuru was not yet facing suspension or expulsion from the party, her future was entirely dependent on Mugabe.

“The president has now been given powers to choose the second secretary and so her position is at the mercy of Mugabe. If she thinks the demotion is a disciplinary matter, she might take legal action, but there is little scope for that at all and no political will to do such a thing. This is a political battle which, for the moment, she has lost,” he said.

Following an amendment to the Zanu PF constitution enabling him to appoint his deputies, it seems Mugabe now holds all power. But the Mujuru controversy is only one of many issues currently nagging at the heart of Zanu PF.

A recent purge within the party, saw the expulsion of two senior members, and votes of no confidence have been passed for at least eight provincial leaders, Magaisa said these steps could finally bring an end to the bitter, old divisions within Zanu PF. The shakeup is also seen as having deeper implications for Mugabe’s succession and the party’s future unity.

“The optimists in Zanu PF will say that the party is undergoing a process of renewal. The old guard is being pushed away and this has been the most fundamental shift seen in years. A new Zanu PF with a new crop of leaders will emerge out of this.

“While Mugabe will remain, [at age 90] he will not last long. Those who deal with Mugabe henceforth will be looking beyond him to those around him. We will see more clearly who will succeed Mugabe after this congress,” Magaisa said.

Wary of the after-effects of a new appointment, Ibbo Mandaza, director of the Southern Africa Political Economy Series Trust, an academic publisher and democracy think tank based in Harare, told the Daily Vox, “This situation is a real dilemma because whoever Mugabe appoints at congress as his deputy is implicitly his potential successor, and if it is someone other than [Mujuru] then that person has to be a unifier otherwise things could backfire.”

Notably absent from proceedings, Mujuru has been the target of songs and slogans calling for the removal of traitors. With the threat of arrest and a possible party demotion hanging over her, the vice president could now tumble down the party line, significantly altering Zanu PF’s political landscape and inevitably complicating the mystery of Mugabe’s succession.