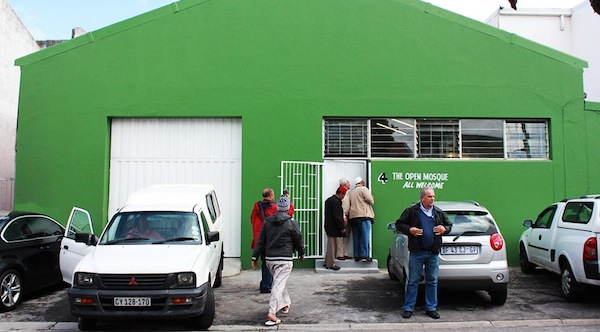 Muslims in Cape Town have all but forgotten the Open Mosque, but eight months ago, the controversial mosque was the centre of conversation. The mosque, members say, is doing a better job of teaching Islam than Muslim scholars. RAâ€™EESA PATHER reports.

Itâ€™s Friday afternoon, and the call to prayer has just been completed. At the front of the small mosque, Nawaz Mahomed is about to deliver the Friday sermon to his congregation. The mosqueâ€™s founder, Taj Hargey, is back home in the UK, leaving Mahomed to lead in his absence. There are just five Muslim men in the congregation â€“ a disappointment for a mosque that preaches inclusivity and which, according to Mahomed, enjoyed support from various people before the outrage began.

â€œWhen the mosque opened and there was this big uproar all over the news, then all these people disappeared,â€ says Mahomed.

â€œHargey was not even necessary to be here. There were enough people to take over and even a different person every Friday to give a lecture,â€ Mahomed adds.

Hargey launched the Open Mosque in September 2014 to great protest. Muslims picketed outside its doors on the day of its launch, and a month later, vandals set part of the mosque on fire. The mosque was misconstrued as a â€œgay mosqueâ€ when community members thought it was the same mosque that Inner Circle, an organisation that prioritises gay rights in Islam, had established.

Standing at a podium inside the mosque, Mohamed begins his lecture, which controversially questions the authenticity of the hadith â€“ the stories about and sayings of the Prophet Muhammad. The sermon is in line the mosqueâ€™s objective to focus on a â€œQuâ€™ran-centicâ€ teaching of Islam, rejecting the hadith as being what Mahomed calls a â€œcontaminatedâ€ part of the religion.

Mahomed, who is the dean of engineering at the Cape Peninsula University of Technology, believes that the Open Mosque can â€œrevitalise the true spirit of Islamâ€, which he says has been corrupted by the teachings of Muslim scholars. According to Mahomed, who has no formal training in theology, current Muslim scholars are not smart enough to lead Islamic education.

â€œUnfortunately a lot of them are not the most intellectual component of our society, so we struggle in terms of the intellectual capacity of our scholars in the Islamic society,â€ Mahomed says.

It is the aim of the Open Mosque to rectify what its members perceive as the miseducation of Islam. They believe the hadith is to blame for the way Muslims incorrectly practise Islam, according to the mosqueâ€™s ideals. Gender equality remains one of the biggest priorities of the mosque, but Mahomed believes that this is not upheld in the hadith.

There has been an ongoing wave of gender activism in countries around the world to make mosques more inclusive for women. While many Muslim women say they have not experienced exclusion from mosques in South Africa, others have documented their experiences: Hajira Amla last year wrote about having to pray in a classroom in a mosque that had no proper womenâ€™s facilities.

Mahomed says that the Open Mosque addresses gender equality by allowing women to pray alongside men and enter through the same door as men â€“ which is disallowed in most mosques. It also encourages women to pray in whatever clothing they wear, rather than the traditional covering of hijab. The controversy is obvious in a society where women cover themselves to fulfil religious duties, but for its members, the mosque is built on a rationale, not shock tactics. Mahomed believes that the exclusion of women from mosques has less to do with the facilities in the mosque, and more to do with the way people think.

â€œIf your ideology is right, you will put in place measures to accommodate the ideology. Itâ€™s the ideology that needs to change,â€ Mahomed says.

Generally, Mahomed sees about 15 men and women, from all backgrounds and religions at the Friday prayers in the mosque. He attributes the mosqueâ€™s dwindling members to the Muslim Judicial Councilâ€™s (MJC) condemnation of the mosque. According to Mahomed, the issue isnâ€™t between the MJC and the Open Mosque, but between the religious organisationâ€™s tensions with Taj Hargey, which began when Hargey allegedly supported a court case against the MJC in the 1980s.

The MJC, meanwhile, has remained mum on its alleged quarrel with Hargey, saying that the reason it discourages people from attending the Open Mosque is because the mosque rejects the hadith.

â€œWe, therefore, strongly advise our community to absolutely refrain from the attendance of the so-called â€˜Open Mosqueâ€™ based on their interpretation of aspects of Islam that clearly contradicts Quranic and Prophetic directives,â€ the MJC said in a statement.

Despite its low attendance and the backlash from the MJC, the Open Mosque may open its doors in Johannesburg in the near future. Domestic tourists who visited Cape Town have approached Hargey to establish an Open Mosque in the Gauteng city. But if the past is anything to go by, Open Mosque 2.0 would do well to brace itself for what might come.