Home As Told to “The police are part of the problem in South Africa; they don’t...
WhatsApp
Facebook
Twitter
Email
Print 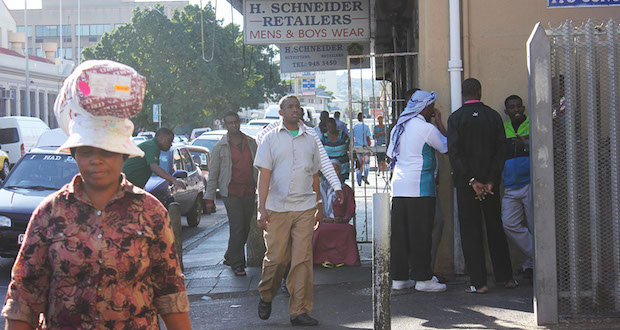 ADDINEW DAMA*, an Ethiopian national, has lived in South Africa for 10 years, selling counterfeit clothing in Bellville. Earlier this month, the SAPS, metro police, the SANDF, and department of home affairs raided the area where Dama works. He told Ra’eesa Pather about the raids and why he takes the risk of running an illegal business.

First, the police asked us for illegal guns and drugs. Afterwards, they came back, and started taking the clothes, looking for the brand names. I can’t tell you how much they took from us. They took it away in too many bags for me to count.

I don’t complain when they look for drugs or guns – that is right. But with the xenophobia, we are not the problem. When they came here, they told us: “My people don’t have jobs, but you come here.” It’s jealousy. It’s all about business. Everyone wants to make money in South Africa. The police are part of the problem; they don’t like us.

You know, we Africans like South Africa. It’s a free country, the democracy is nice and we can go everywhere. But when I see the police and the military like this, then it becomes like other African countries. It’s becoming like that now.

Seeing the military made me feel like I am a terrorist. There are different kinds of police departments, and they are supposed to handle the operation – not the military. It’s not okay. It means the police are not in control. They can’t control the violence, and they will never be able to control the xenophobia. That’s what the government is saying when they put the military in an operation like this. Foreigner people are not supported by government money. There’s just a market to make money, and that’s all the government promised us for freedom. After that, we can’t ask them for anything. We just survive. Now they come to us and they say: “You guys come here, and my brother, my sister doesn’t have a job.”

I can’t complain about it, because I am a foreigner. I am not the right man to complain. I’m doing an illegal business – who is going to listen to me?

We don’t have a choice but to sell this illegal clothing. I’m doing it to survive, and to support my family in Ethiopia. If I stop this business, then what am I going to do here? I can’t get a job in this country.

Let me tell you, one of my friends is a licensed driver. He applied to companies all over here. They didn’t say no, they just said to him: “I’m going to call you back.” He waited for that call, but it never came. I hear stories like that, and I don’t believe that I can get a proper job.

We were making a good profit for five years ago, but in the last three years, it’s been tough. We are poor people – we are not like big businessmen. If we make a loss, we lose. And to make things worse, they’re taking our stuff. To grow back again is difficult. Mentally, it affects our confidence – we just sit here and we don’t see a future.

After they left, I did nothing. There was nothing I could do. I have had many challenges over the years, and now I’ve become weak. In my mind, I feel there is no hope. Life is expensive in South Africa, rent is going up, and we make so many losses with our business. I’ve become tired.

Asked to comment on the raids, the Western Cape SAPS told The Daily Vox: