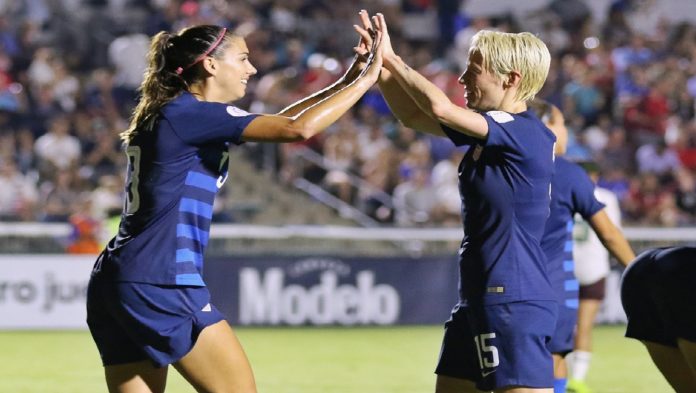 The spotlight has been on women’s football this year with the Women’s World Cup (WWC). One thing the tournament has shown is the persistence of gender discrimination within women’s football. Women footballers face unequal treatment on and off the pitch. Add in sexism, discrimination and patriarchal standards of what it means to be a woman and you have a winning combination. What’s striking is the attention leveled at women footballers off the pitch rather than the incredible work they’re doing on the pitch. It seems women’s football is unable to escape being political.

BY SHAAZIA EBRAHIM AND FATIMA MOOSA

The United States Women’s National Team (USWNT) will be battling Netherlands in the final of the 2019 FIFA WWC. Team US will be hoping to add another accolade to their repertoire. The Netherlands, on the other hand, will be going into the game hoping for their first ever World Cup trophy.

The USWNT hasn’t escaped controversy in this year’s tournament. The team enthusiastically celebrated their 13-0 win against Thailand in the group stages of the tournament. There was criticism. Then-striker Meghan Rapinoe said she would not be visiting the White House if the team wins the tournament.

During an interview, Rapinoe said: “I’m not going to the fucking White House… We’re not going to be invited… I doubt it.” Some have hailed her a hero for this statement, while others have slated her. But there’s no doubt that it’s become a huge talking point about the team.

Then there were questions around striker Alex Morgan’s celebration when the US beat England in the semi-final. She gestured “sipping tea” when she scored. This started a fierce debate about what her celebration meant. Yes of course Morgan has a political belief in mind when scoring a goal to take her team into the final. Some said she was reenacting the “sips tea” meme while others thought she showed disrespect to the English team. All of the criticisms around her celebration seemed to stem from the idea that Morgan was “not behaving as a lady” should.

Both incidents caused quite a stir, showing that there is more attention to what they’re doing off the field – and the political implications thereof – than their outstanding football on the field.

Even as the team is on course for their fourth title, they are still battling the gender pay gap. This is despite the USWNT being far more accomplished than the men’s team. All 28 members of the current squad sued their football association for gender-based pay discrimination in 2019.

What these examples show is how the identity of a woman footballer has become inherently political. This is true for a number of women footballers around the world. Women footballers, regardless of which country they represent, are always speaking on political issues whether they want to or not.

South Africa’s own women’s national team Banyana Banyana continuously headlined for their bid to be paid the same amount as their male counterparts Bafana Bafana. Banyana arguably been more successful than Bafana professionally were paid less than Bafana until May 2019. (It goes without saying that the teams should be paid equally regardless of which team’s more successful.)

And in every interview, amid talks of goals and tactics Banyana had to consistently field questions about the pay gap.

“Look, with all due respect, men’s football has been professional for a very long time. Women’s football is not professional at the moment. And when 2019 comes people can sit down and realise it’s the same job. But you cannot compare the two. They also need to give the females what they are due and we’ve got a lot of sponsors. They have come on board, sponsoring the players in the national team and hopefully it will get better as the team performs well,” Banyana coach Desiree Ellis said in an interview with The Daily Vox in 2018.

In the same interview, team captain Janine Van Wyk spoke to The Daily Vox about women’s football in South Africa.

“In the past couple years women’s football has grown a lot. A lot of people are out here supporting women’s football…There are young girls playing at schools, grassroots levels, and at club level. Whereas 10-15 years ago, you didn’t find girls doing that. And the more we do as a national team qualifying for these major tournaments, women’s football will just explode in this country,” Van Wyk said.

Women footballers seem to carry the added responsibility of having to answer for their progress in the sport.

Banyana has also had to fight to be paid their bonuses. Last year, Power FM released a report saying several players from Banyana had not been paid their bonuses after the team’s wins and qualifications. There is also a huge gap between the amounts Bafana and Banyana get paid for bonuses. This year, the South African Football Association said the team will be paid bonuses equal to Bafana. Whether this will come to fruition remains to be seen.

Besides the gender pay gap, women footballers are forced to speak up about gender discrimination.

Ada Hegerberg is the current and first Ballon d’Or winner. She helped her club, Lyon to win the 2019 UEFA Champions League. Yet Hegeberg was not playing for her home country, Norway at the World Cup in France. This is because of the inequality in her country, she says. Norway is counted as the first football federation in the world to offer equal pay for the men’s and women’s team. However, Hegeberg has said it’s not only about the money but the continued gender discrimination in decision-making.

“There are federations, there are clubs, there are men in high positions who have that responsibility to put the woman in the right place and that’s where I think, I feel, and I know, we have a long way to go,” she said.

When Hegerberg won the Ballon d’Or in 2018, a DJ who was hosting the awards asked Hegerberg to twerk on stage. A visibly unamused Hegerberg said “no” before leaving the stage. This is just one public instance of the discrimination and sexism women in football face.

Yet again, this example shows how much more (often negative) attention women footballers face off the field.

A 2018 Women in Football report showed an almost 400% increase the number of reports of sex discrimination and harassment incidents. The report said “lewd comments of a sexual nature, racist, gendered remarks and threats of violence were reportedly made to a number of high?profile female journalists, broadcasters, players and referees.” Most of these incidents take place on social media, making it extremely difficult to police.

Politics and discrimination overpower the football

A lot of the stories emerging around the gender discrimination of women’s footballers come from the United States and Europe. Yet as sports journalist Shireen Ahmed argues in Time magazine: “But if the most successful and popular women’s teams in the world are fighting for their dues, imagine the obstacles of those who don’t have the platforms, who don’t have the safety and who are simply trying to keep their teams afloat.”

We can never ignore the discrimination and misogny that affects women in sport. By virtue of being women playing a sport that has historically been dominated by men professionally, women footballers have to consistently explain themselves. They consistently field comments about their sexuality, their appearances, their personal politics, and the gender pay gap. More often than not, the politics and discrimination gets more coverage than the football itself.