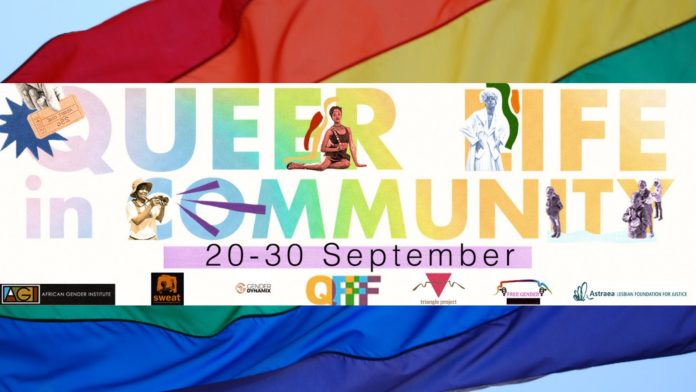 This December, the Queer Feminist Film Festival (QFFF) which honours queer and feminist activists, is due to take place. In the run-up to the festival, QFFF will be hosting an online ticketed screening event called Queer Life in Community. The event will take place between September 20-30.

The Queer life in Community films were created by citizen journalists as part of the QFFF mentorship program. In 2020, mentees were trained and guided by seasoned professionals in the industry. The screening will be a compilation of their work and the narratives they chose to tell. Four films were shot and compiled into one. It will be screened as one full-length film.

Speaking to The Daily Vox, Darion Adams, the festival coordinator, said the film showcases the lived realities of queer people on the Cape Flats. Adams said it is a celebration of stories from people in these communities. It is about how queer people live and exist in their everyday lives and amplifying those voices, they said.

Tickets to the event will cost R100 each. The money from the tickets will be used to support the QFFF.

#LGBQTILife: The Pocket Queerpedia is an educational resource for understanding queerness

Adams said the citizen journalists had a one-day crash-course in film making. They learnt how to shoot, conceptualise and create the films in their communities. Each mentee had a mentor and had constant convening sessions to guide their process, they said.

The films were based in four communities in the Cape Flats area; Lavender Hill, Manenberg, Paarl and Khayelitsha.

The film by Keanan Rowland from Lavender Hill feautures the stories of queer people across generations. Queer Life in Lavender Hill also showcases the LGBTI safe space created by Rowland, in his community.

Similarly, from Manenberg by Marchelino Brown featured activist bodies from the area, who work and live in this community. They narrate their experiences about how they live resiliently.

The film from Khayelistha by Sesethu August features one person, and their existence as a queer person in their family. It documented how they feel about fitting in their community, and how they relate or don’t relate.Trapped at home due to lockdown restrictions, she only feels welcomed and accepted with a women’s group called the Phefumla Queer Collective.

The Paarl feature by Mandisi Phika is a touching and emotional journey celebrating days in the life of Mandisi. “It is a living celebration of Mandisi as an amazing, vibrant, extravagant queer person,” Adams said.

Support for the citizen journalists came from various organisations. These included Triangle Project, Sex workers Education & Advocacy Taskforce (SWEAT), Gender Dynamix, Free Gender, Astraea and the African Gender Institute. There will be screenings in the various communities while the online event takes place.

The QFFF aims to challenges mainstream media narratives that caricature or only portray queer people as victims of violence, and oppression. The lived realities of many queer people are marginalised, and particularly that of black and coloured persons often gets misrepresented. The citizen journalists wanted to center their stories on their communities to reclaim their stories and how they are told.

“Locally-made films by queer people are important to shift these narratives, and expose truths we dont often see,” Adams said.

More information can be found here.