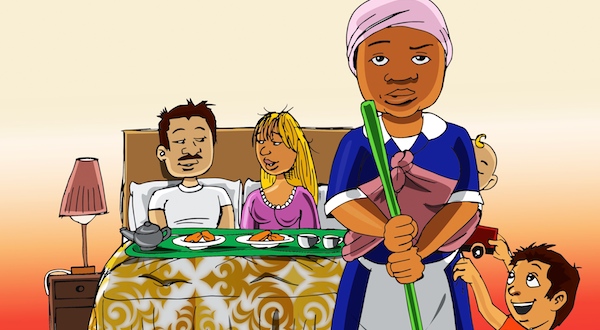 Nothing puts people on the defensive or makes tempers flare the way race does â€“ or rather talking about race and its derivatives, race and culture, race and religion, and of course race and class.

We canâ€™t really separate them from each other. Right?

Last week,Â A Day in the Life of a South African MaidÂ went viral. It swept through Twitter, bounced off the walls on Facebook and Reddit, and found its way onto left-wing and right-wing websites. (Some angry expats dropped in for some finger-wagging, apparently.)

But what was it about this piece – which we republished from a private blog, mind you â€“ that herded in the people to read it, re-read it, and pass it on to their friends?

“Out of all the links shared with my WhatsApp correspondents last weekâ€¦ this one elicited the most discussion and response. Obviously most were saddened by the daily struggle, but the writing kept her authentic voice with phrases like ‘she is messy, that one’, that allowed us South Africans privileged to know woman like this, to proudly reflect on what we think is a uniquely South African character, endowed with indomitable spirit, good humour and goodwill,â€ commented one of our readers.

And I have to agree with him.

Our country is still subject to the institutional racism of yesteryear, and we must daily deal with complex problems, which have no easy answers.

A few weeks ago, Haji Mohamad Dawjee, a writer at theÂ Mail&Guardian, drew the ire of readers whenÂ she suggestedÂ that people shouldnâ€™t have domestic help. She argued that people ought to take responsibility for their own homes, kids and pets -Â  should we really be asking other people to do what weâ€™d rather not do ourselves?

But, it could be argued, if everyone who could afford domestic help chose not to employ someone in their home, there might be a lot more poverty in this country. Work is work, after all.

There was a lot of defensiveness and anger in responses to that article. Readers made vitriolic comments about the writer and about domestic workers alike.

South Africans want to talk about race, as aÂ merry Twitter conversationÂ about white people leaving the country also showed last week – but it seems we just donâ€™t know how to go about it. And sometimes we get it horribly wrong, getting snarled up in the knots where race, class and culture intersect. Awkwardly.

Readers debated domestic workersâ€™ options, choices and challenges among themselves. Missing from all of this â€“ the article itself and the comments it elicited â€“ was the voice of anyone who works as a domestic worker.

And so, â€œFlorence”â€™s story gave much-needed perspective to this debate. Her story showed that one can be aggrieved with oneâ€™s employer, overworked and underpaid, and still be grateful for a job.

Her optimism, despite living hand-to-mouth in a cold and wet home, allowed many South Africans to accept her story and gain an appreciation for the challenges in her life, without getting defensive about their role in it.

And it allowed us to put a finger on where we should look for our solutions when it comes to the question of domestic work â€“ employment contracts, a fair wage, respect, common decency, and maybe not asking someone to leave home at the crack of dawn so they can bring you breakfast in bed.

What Florenceâ€™s story demonstrated is that if we are to have a national conversation about race â€“ which is also a conversation about inequality in South Africa â€“ then we must start with our own stories and take the time to hear each other out.