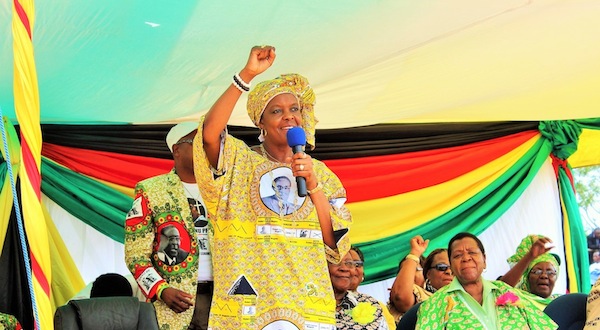 Bulawayo, Zimbabwe – Zimbabwe’s First Lady Grace Mugabe makes her grand entrance into politics following her recent nomination as national secretary of the ruling party’s Women’s League through a sensational two week-long crusade around the country, whipping supporters into a frenzy and ruffling the feathers of Vice President Joice Mujuru. Tapping into party grievances and adopting the Zanu-PF Youth Leagueâ€™s anti-factionalist slogans to rally support for her husband, Mrs Mugabe’s movement up the Zanu-PF ladder adds a new twist to the battle for the presidentâ€™s succession.

As Africa’s oldest leader, Mugabe has been in power since his countryâ€™s independence in 1980 and turns 91 in four months, while his 49-year-old wife launches her political career through a whirlwind of rallies. As sole nominee for party leader, Mr Mugabe is up for re-election at the Zanu-PF congress in December and is expected to steer the nationalist front to elections in 2018 when he will be 94, while Mrs Mugabe, a controversial PhD holder, takes up the reins of the Women’s League later this month.

The First Lady’s relationship with the veteran president began as an extra-marital affair during his marriage to his first wife Sally (nee Hayfron) Mugabe, a Ghanaian who died of a kidney ailment in 1992. The two had a secret wedding in 1996. With no named political heir, no living siblings and three children with Mr Mugabe, Mrs Mugabeâ€™s political rise could be seen as an attempt to establish a family dynasty and to rout out the sitting presidentâ€™s enemies within the party.

Styled in the manner of Mugabe’s “Meet the People Tour”, which is traditionally held in month preceding an election year, Mrs Mugabe and her entourage went from province to province meeting supporters, dishing out hampers of food and farm implements, and promising to deliver at least 50 tonnes of seed in two provinces. The Grace Mugabe rallies have infused a new energy and feeling of excitement into the party. She holds some appeal with the public, despite public criticism over her extravagance, which has earned her the nicknames The First Shopper or Dis-Grace.

Backed by Zanu-PF’s Youth League, the Women’s League and a group of wealthy, young ministers, Grace Mugbeâ€™s rallies were aimed at reuniting and re-energising the divided party and putting an end to factional battles. But the gatherings have thrown her into the centre of a spectacle, taking Zanu-PF’s catfights and gang battles to a new level. Mrs Mugabe has indirectly called for the removal of the vice president, accusing her of corruption and factionalism. The First Lady has also whipped up support from the youth for party heavyweights while calling for Mujuruâ€™s removal.

Mujuru was ushered into power by her late ex-husband, the influential army general Solomon Mujuru. She leads one of two main factions competing to succeed Mugabe in the event of his death or retirement from power. Until a few weeks ago, this faction was considered the stronger contender, but the launch of the First Lady’s political career and influence within the youth league has challenged the Mujuru bloc and revived the waning minority group led by Minister of Justice Emmerson Mnangagwa, 68.

Tipped to be Mugabe’s successor, Mnangagwa, a trained lawyer and former head of the secret service, is backed by Zimbabwe’s security chiefs. His ties to the countryâ€™s feared military and Central Intelligence Organisation, which have both been accused of mass human rights abuses, make Mnangagwa appear a more brutal choice for succession to Mrs Mugabe. Neither Mujuru or Mnangagwa have openly declared their desire to take the reins of power, but the rise of the presidentâ€™s wife has injected a new life and energy into the faction led by Mnangagwa, while indirectly demanding an apology or the ousting of Mujuru who is accused of fanning factionalism and engaging in corruption. Once the youngest minister in Mugabe’s first cabinet in 1980, Mujuru, a former liberation fighter, now appears to be a scapegoat for the deeply divided party’s problems. Poking fun at Mujuru, the state press have run headlines such as “On your bike ma’am” and “Mujuru to learn of her fate” suggesting her time in power is up. The corruption and factionalism allegations against the vice president are reportedly on the agenda of this week’s party politburo meeting, scheduled forÂ Thursday, the main purpose of which is to discuss Zanu-PFâ€™s election guidelines for the partyâ€™s upcoming Congress.

Among the issues under review are the eligibility requirements for senior party posts. These are expected to create some advantages for the Mnangagwa-led camp. It’s unclear what could unfold in this week’s meeting, which was deferred to Friday, but Mujuru will not be ousted overnight, despite the wishes of her accusers. She still has support within the party and holds the deputy leader post until year-end when the position goes up for re-election.

Mrs Mugabe, on the other hand, has a long way to go within the party ranks, but she has made no secret of her political ambitions. Basking in the national spotlight, she has used her rallies to gush over her achievements and reveal her divine presidential aspirations.

â€œWhen I was approached to come into politics and lead the women, one day I saw a vision of me ruling the heavenly kingdom. Iâ€™m here today witnessing it and I have decided to take up the challenge,â€ she told a rally of thousands in the south-western city of Masvingo last week.

Mrs Mugabeâ€™s musings may be little more than self-indulgence, but her political aspirations are now known. It’s unclear at this stage whether she will be able to bend the countryâ€™s eligibility rules and throw her hat in the ring in December. Current guidelines require candidates for senior posts to have served 15 consecutive years, however these rules are currently under review by the politburo.

However the thought of Grace as president inspires little confidence among some Zimbabweans, who see her as too meddlesome and too extravagant.

Jane Nleya, 43, an accountant from Bulawayo, Zimbabweâ€™s second largest city, said: “We are in trouble, we won’t survive with this woman in charge, it’s better if Mugabe just stays in power”.

Yet Zanu-PF member Liberty Mpofu, 27, from the small town of Kwekwe, told the Daily Vox: “Grace is our beautiful Mother of the Nation, she has done a lot for the disabled and the children. She doesn’t have the skills to lead this country but she is bringing the people back to Mugabe.”

Behind closed doors, Zanu-PF loyalists are rallying around the veteran leader, but it seems like the knives are out for Mujuru. Some analysts see Grace’s tension with Mujuru as a proxy for bigger forces who want the vice president out.

Junior politickers who have made no secret of their allegiance to the Mugabes, were part of Grace’s large entourage. The outgoing head of the Women’s League, Oppah Muchinguri, a close friend and ally of the First Lady, is rumoured to have her sights set on becoming party vice president or secretary for administration, posing a direct challenge to Mujuru. On the Grace tours, she was accompanied by the Women’s League, as well as a group of five younger ministers and MPs such as Mugabe’s nephew and the wealthy ministers of transport, information and environmental affairs. All five once belonged to Generation 40, a group of forty-something leaders loyal to Mugabe.

An unpolished speaker who falters in her speech and struggles with Ndebele, the First Lady, who infamously assaulted a photographer at a high-end department store in Hong Kong, has found a way to reinvent herself. Flanked by her bodyguards and a bevy of women in pro-Mugabe java print dresses and headwraps, Mrs Mugabe has taken advantage of Zanu-PF’s long-running factionalism and succession battles and presented herself as another option.)

Keen to preserve the Mugabe legacy and known to use her First Lady status to play politics, Mrs Mugabe enters politics on a high note as Queen of the Party signaling there could be more drama ahead as Zanu-PF grapples with internal division and charting it’s future after Mugabe.