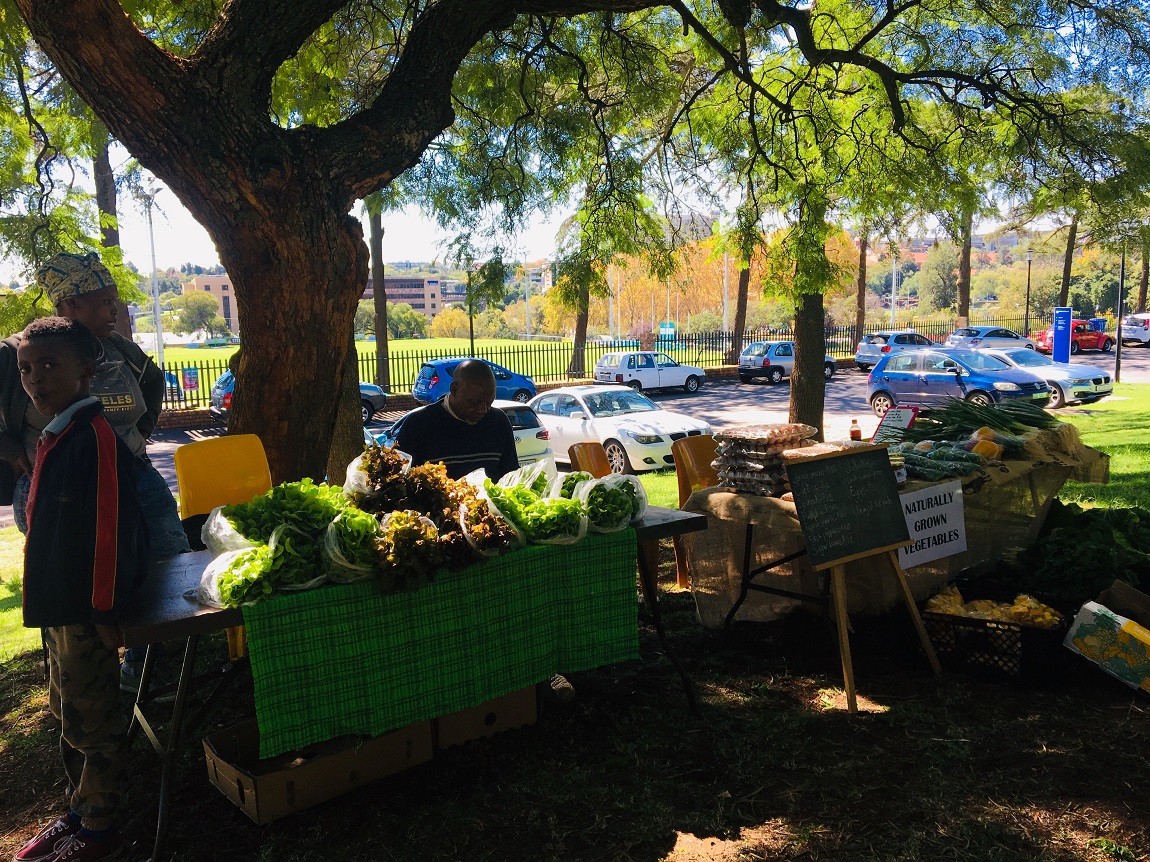 Small farms and gardens have begun popping up all around the Johannesburg inner-city. The contrasts between the bustling urban environment and the greenery of these farms could not be more different. From Bertrams to Braamfontein, these farms might seem like the newest trend but they serve very important purposes.

At Wits University, the Co-operative and Policy Centre (COPAC) and the Wits Citizenship and Community Outreach Centre (WCCO) have started a farmer’s market. This brings together urban and small-scale farmers to sell their products and inform more people about urban farming.

Urban farming movement is at its essence about “the growing of food in the city or on its periphery, on a relatively small scale; and sometimes extends to rearing goats, rabbits, chickens and ducks, and keeping bees.”

Growing fresh produce or rearing animals in the city brings with it a lot of questions about space management. Urban farming projects stretches the imagination about where and how the farming takes place. From small plots in parks to universities and even people’s backyards, these farms are everywhere.

One such project is the Wits Food Sovereignty Centre. Started at the University of Witwatersrand, the project forms part of a bigger push at the university to fight food insecurity and introduce food sovereignty. Part of the project is a food garden, food bank, and student communal kitchen. The whole purpose of the project is to create a sustainable pathway to the city of developing urban and small-scale farming and indigenous methods of growing.

In 2018 The Daily Vox spoke to Courtney Morgan, an intern at COPAC. She said: “We want to create a market where different urban food gardeners can come together. One of the issues with small scale farming is that people don’t trust it – they see a woman selling her vegetables – they think that’s dirty as compared to the supermarket ones but the one on the side of the street is healthier. We want to show that small scale farming is viable in the city.”

The market kicked off in 2019. The Daily Vox attended the second edition of the market which took place on April 26.

On a grassy embankment across from the Centre, the farmers had their five stalls set up. The farmers at the market come from many different areas around Johannesburg. Another farmer was supposed to be at the market but reportedly couldn’t because of car troubles. Slowly students began trickling into the area to buy produce from the farmers. There was a varying range of produce from lettuce, herbs, spring onion, and chillies.

As the time for lunch approached, a long snaking line of students gathered at the centre. These students are part of the reason why this project was started at Wits. Many students at the university and universities around the country do not have the resources for food. This means that many students are forced to study on empty stomachs. If they do have access to food, it is often unhealthy, fast food outlets they turn to.

Belinda Ratyana and Robert Mutero work together at Belz Greenz and Herbz at the National School of Arts in Braamfontein. Their produce is grown through hydroponic methods and it only takes one month to grow.

Ratyana says coming to the market is important. “Students staying in the residences can’t go [to shop] because their schedules are busy. So at least when we bring things to them it helps them. A lot of street kids and those far from home need to eat healthy so we are helping communities that can’t afford,” Ratyana said.

One of the other people in the market was food grower Sandy Perry. She based in the inner city in Observatory. She started a home garden in 2014-2015 to enhance her sons’ homeschooling experience. However, taking that further into communities, Perry said people need to be able to have security and sovereignty in producing foods, knowing that there are no chemicals in food and eating food seasonally to get the full benefit of nature.

For Perry, food sovereignty means having some kind of ownership over the source of food: “That extends to being able to grow your own seedlings and controlling the seeds because multinational companies that grow seeds control this and you have to keep buying it from them (instead of being able to save your own).”

However, the issue of food sovereignty extends far beyond university students. In 2017, The Daily Vox spoke to Professor Sheryl Hendriks, director of the Institute for Food, Nutrition and Well-being at the University of Pretoria. According to Hendriks, one-fifth of South Africa’s population are food insecure, generally low-income and many rely on social grants with rural provinces such as the Eastern Cape and KwaZulu-Natal among the most affected. This is what the urban farmers hope to tackle.

Most of the farmers at the market were unequivocal about the need for more support for urban and small-scale farmers.

In response to what government can do Perry said they should provide access to land and infrastructure support, ensure land tenure so that people are not evicted. Perry said if there is no support for farmers, they won’t be able to maintain consistent crops. “With the climate changes they will be unable to sustain themselves,” said Perry.

Mam Vi says she uses the City of Johannesburg’s land for her farm but can’t wait until she owns her own land. “Growing your food to feed the nation is important. There are people who want to eat natural food and we accommodate them,” said Mam Vi. She believes that President Cyril Ramaphosa will be able to give her the land she needs for farming.

“I believe in Ramaphosa. He assisted this country to unbundle the corruption we were under. I believe that very soon after the election the land will be released. I applied with the Land Reform and they contacted me two weeks ago to tell me I am 429.” said Mam Vi.

Urban Farming Around The World

Urban farming is not just happening in Johannesburg, and South Africa. There are many projects such as these in Kampala, Uganda, and Tokyo, Japan. These projects are all about turning urban spaces into farms.The benefits of the project is boosting local economies and providing greater food security.

With the effects of climate change, food insecurity and more radical weather changes will become more pronounced. Changes will need to be made. Urban farming is one of the ways communities are using to combat this.