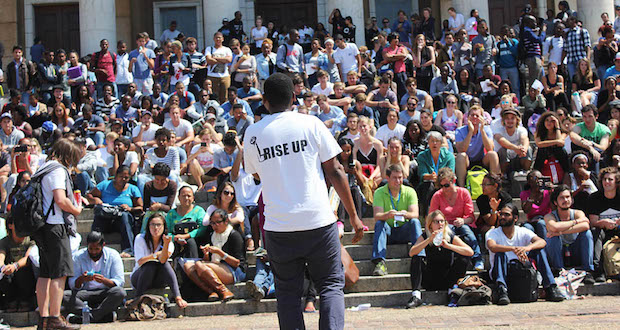 About 500 staff and students from the University of Cape Town gathered on Thursday for an open-air dialogue to discuss the fate of the statue of colonialist Cecil John Rhodes, which sits on upper campus overlooking the Cape Flats. RA’EESA PATHER reports.

On Thursdays, the steps before Jameson Hall usually play host to students seeking out entertainment in the form of bands, marketing events and competitions. But this week UCT students gathered for a different reason altogether – to discuss the legacy of colonialism and the lack of transformation on campus. “This is an issue of having an item on campus that makes students feel uncomfortable,” said organiser Kgotsi Chikane, who sported a T-shirt bearing the words “rise up”.

“Today is a day for us to all feel uncomfortable.”

The item Chikane spoke of is the statue of Cecil John Rhodes.

The steps were packed, and more people spilled onto the plaza to form a circle around the speakers. A system was quickly established to allow for informal dialogue – anyone who wanted to talk should raise their hand and would then be given one minute to air their views on the issue.

“I’ve been here a few weeks, and I already see institutional racism. There is no statue honouring black academics,” said Bevan Willoughby, a first-year arts student. “I say we move the statue, and build something together.”

“We are here to fight a system which was to divide us as a people,” added Kukhoenyce Magobane, an undergrad student. “We are not black people fighting white people. We are fighting the system as a youth.” The crowd cheered, and in the breaks between speakers shouts of “Amandla! Awethu!” reverberated across campus.

Students argued that the university’s lack of transformation is evident in the naming of structures around the campus. Jameson Hall, they noted, is named after Leander Starr Jameson who was prime minister of the Cape Colony from 1904 to 1908. There are no black female professors employed by the university and the history of black academics such as AC Jordan, UCT’s first black professor, and Archie Mafeje, a senior lecturer at UCT whose removal from the campus under apartheid law sparked outrage and protest from staff and students, has been largely ignored.

The statue of Rhodes, they said, had become symbolic of this lack of transformation and of institutional racism at the university.

As speaker after speaker took the mic, students gathered at the plaza demanded a date when UCT would remove the statue, chanting “Down with Rhodes, down!” and “We want a date!” Some students said they felt that they were being unfairly victimised by protests over the statue. During a protest on Monday, UCT student Chumani Maxwele threw human excrement at the statue of Rhodes, provoking support from some and anger from others.

After the incident, Maxwele was photographed holding a placard that said “Exhibit white arrogance at UCT”.

“I am not racist, nor am I a white arrogant person,” said Matthew Holding, an undergraduate student. “I believe that we as white people are being victimised.”

Boos and jeers erupted at this.

While Holding took issue with the placard, Tom Westermann, a business science undergraduate, faulted how Maxwele had protested, saying that throwing faeces is “violating public laws” and “violating health laws”. Westermann said that a petition would be a greater way forward for change.

“White people are surprised by the poo, but we live with the poo,” said Athabele Nonxube. “The reason you are rich is because we are poor.” “If the institution listened to concerns, people wouldn’t feel the need to throw faeces,” added Roscoe Jacobs, a student on the campus.

Students cheered as sociology professor Xolela Mangcu, who has written extensively on the issue of staff transformation on the campus, joined them in solidarity and said that the removal of the statue must be a symbolic move towards removing institutional racism.

Alongside the student body, Khaled Sayed, the chairperson of the provincial ANC Youth League, took the mic to give students a nod for their actions.

The meeting was divisive and hotly contested, but a consensus began to emerge: the statue, and the institutional racism it symbolises, must go. Although many students rallied for the destruction of the statue, the majority of those present suggested that the statue be removed from its central perch overlooking Cape Town’s horizon, and be stowed in a separate space where colonial artefacts could be visited and critically engaged with as a reminder of South Africa’s oppression under colonial rule, and its legacy.

“Cecil John Rhodes donated land to UCT,” said Thandani Mluado. “But there were ways of acquiring land that indigenous people had, that he did not respect. His contract was blood.”

Later that day, UCT’s Student Representative Council covered the statue in a sheet to demonstrate its endorsement of the call for its removal.

But will this be enough for the university management to take action and let Rhodes go?

– All images by Ra’eesa Pather.