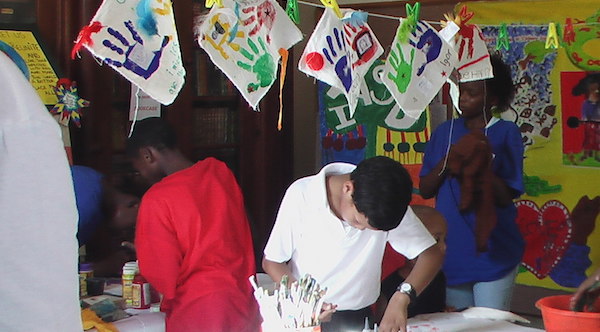 In one of Knysnaâ€™s poorest communities, a small organisation is using unconventional methods to teach kids about HIV and AIDS.

Mad About Art uses art to teach young people about HIV and AIDS. The organisation was founded by HIV awareness trainer Larry Gurney, who came to South Africa from London in 2011, after learning about the countryâ€™s devastating HIV/AIDS death and infection rates. Gurney, who is HIV-positive, hoped to use art to educate people about the disease. He soon created Mad About Art and started working with a small group of children in the Nekkies informal settlement just outside the idyllic holiday town.

Today more than a hundred children, aged four through 17, visit Mad About Art each week.

The challenge, says Mad About Art manager and facilitator Phumeza Mdingi, is keeping kids from getting bored with the subject.

â€œMost of the time, the kids are getting bored when they learn about HIV, so HIV education needs to be made more fun so the kids can understand it better,â€ he said.

â€œArt is a very easy thing for the kids to [use to] express themselves about how they understand HIV.â€ For Mdingi, the HIV crisis hits close to home. Despite governmentâ€™s decade-long struggle to raise awareness of HIV, the disease is still deeply misunderstood, and stigma is rife. eNgcwazi township, the community from which Mdingi hails, is no different.

Her uncle was HIV positive. The lack of education in the community meant that Mdingi didnâ€™t feel comfortable sharing a drink with him when he offered her a sip from his cup. They never spoke about the disease, and he died. To this day, she still feels guilty about it.

The experiences motivated her to leave home to learn more about HIV/AIDS so she could one day return and raise awareness in her community, she says.

â€œYou see all the people who are doing this to their families, which means that the stigma is the thing that kills people, not the virus,â€ Mdingi says.

Children who attend the programme are encouraged to tell their own stories through the art they produce.As the process unfolds, Mdingi says, sheâ€™s able to learn about their troubles at home and their understanding of HIV, and it becomes easier to pinpoint the children who need extra care and assistance. â€œIt gives the kids an opportunity to express themselves. I have had about 21 kids [come through the programme] who have been raped, but they never mentioned it to their parents. They tell us Wwhen I was 8 years old, I was raped, but I never told anyone about it.â€™â€ She says.

Mdingi says she builds trust with the youngsters by sharing her own troubling experiences from her childhood.

â€œWhen you share you gain the trust, because you give them the hope that they are not alone and they are not the only ones, because it happened to me too,â€ Mdingi says.

The process facilitates open conversations about HIV/AIDS in a safe space where learners feels protected, Mdingi says, and this has opened doors for Mad About Art to host dialogue sessions with parents.

â€œThere are still people who believe there is no HIV, and that if you have HIV you are being cursed. That is why we want to involve the old people and their children, so that they can accept and learn that HIV is something we all need to know about,â€ Mdingi says.

Although Mad About Art receives funding from the Department of Arts and Culture and the DG Murray Trust, funding remains its biggest problem. The organisation has begun raising funds through hosting tours, renting out inflatables like jumping castles, and selling art.

â€œItâ€™s not enough, but at least we are getting something just to keep the doors open,â€ says Mdingi.

Mdingi says she plans to return to the Eastern Cape next year, to open her own branch of Mad About Art.

â€œI want to make a difference to another community, and Iâ€™m concerned about my home because I know the situation there. When I was growing up, we didnâ€™t know that much about HIV/AIDS because we there is no organisations like this,â€ Mdingi says.

â€œI respect this programme,â€ she adds. â€œI can see the difference it makes.â€