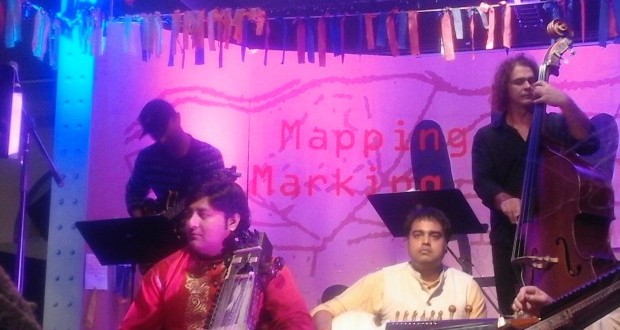 The ship was rocking, the wooden floor was creaking and the audience could sense the trepidation. The Storming, an adaption of AimÃ© CÃ©saireâ€™s Une TempÃªte, itself an adaptation of Shakespeareâ€™s The Tempest, was performed on 25 and 26 September 2015 at the District Six Homecoming Centre in Cape Town, after months of transcontinental conversations. ADITI HUNMA was there.

The Storming has brought together an ensemble of poets, musicians from India and South Africa, with artistic influences from the Caribbean and Mauritius, such as Dev Virahsawmyâ€™s Toufann, to articulate the postcolonial angst across the Indian Ocean.

Shakespeareâ€™s The Tempest was conceived in 1610 and shares the story of Prospero, once the Duke of Milan and his daughter Miranda, who live on an island with two native slaves, Ariel the fairy and Caliban, after being banished by Prosperoâ€™s power-thirsty brother, Antonio and his accomplice, Alonso, the king of Naples. The first scene opens with a storm, apparently conjured by Prospero himself, to create a shipwreck. On board the ship are Antonio, Alonso, his son Ferdinand and others.

The shipwreck brings them to the island where Prospero has contrived a series of events and illusions to make Antonio and Alonso suffer and repent. During that time, Ferdinand and Miranda fall in love, while Caliban and his accomplices plot Prosperoâ€™s murder without success. In the end, Prospero, Alonso and Antonio make amends, the happy wedding of Ferdinand and Miranda is announced, and they all prepare to return to Naples. Ariel the slave is also liberated and Caliban is forgiven for his rebellious act.

In AimÃ© CÃ©saireâ€™s 1969 version, Prospero remains on the island and the natives remain subjugated. In Dev Virahsawmyâ€™s Toufann (1991), Caliban is the charming and intelligent offspring of a white pirate and black slave, who ends up marrying Prosperoâ€™s daughter. The play is set in Kreol Morisien, the local tongue rather than English, hence reshaping The Tempest on various fronts.

The present play The Storming comes with a postmodern flair. It is a dramatic-poetic musical divided into four movements, rendered by vocal artists and musicians on Indian, Western and South African instruments.
Prospero is the ruler on a remote island; his slaves are Calibana and Ariela, female natives he exploits to create his dynasty, a modern developed state.

In a praise poem, he boasts:

â€œI made this place, from when it was a swamp
Look at it! To these vistas of gold and steel and glass â€“
I made the trains, the highways, the temples, the beachside resorts
With a pocketful of rupee and rand and my engineering books â€¦â€™

Meanwhile, Calibana, filled with frustration and rebelling against indoctrination, cries out, â€œWhy should I not burn down your school, emasculate your teachers?â€

After a period of rapid growth, the land is exhausted, bled dry; â€œthe iron ore mines have killed us deadâ€. The artists sing about bones, accompanied by the flute whose deep drone accentuates the hollowness of the cityscape.

Eventually the glamour of city life runs dry, and they ask, â€œWhere is home? This wreckage is not home,â€ and they boldly prepare themselves for the next storm, leaving the rest up to the audienceâ€™s imagination. The Storming is an offshoot of â€˜The Insurrections Ensembleâ€™ project started in 2010 as a collaboration between Indian artist and economist, Sumangala Damodaran and South African poet and sociologist, Ari Sitas. The project was later joined by various artists such as Sazi Dlamini and Neo Muyanga from South Africa.

Sumangala Damodaran explained how the play came into being, “Shakespeareâ€™s The Tempest was reinterpreted in the postcolonial context, as a form of ritual theatre, to talk about our stormy times. What connects India and South Africa is the Indian Ocean, which was once a conduit for slave trade and which bore witness to horrible stories during colonial times.”

However, this modern rendition of The Tempest goes a step further, she notes, to address topical concerns, â€œconsumerism, outrages of capitalism, human exploitation and environmental devastationâ€.

For Ari Sitas the play is about a quest. It is about â€œthe unresolved questions of home and identity; of forced migrations and belonging; of finding a confluence between a musical and a poetic craft that speaks to our predicamentâ€.

Looking back, he reflects, â€œPerhaps, it is no longer sugar, spices and spikes that bring us together in the Indian Ocean but a hope that we can find a homing despite the wreckage.â€

For Vivek Narayanan and Sabitha TP who penned portions of the lyrics, the challenge was â€œto find a language to address the crisis in global politics today, and what it means to live in this periodâ€. They used Dev Virahsawmyâ€™s Toufann as a point of departure, â€œa boat to spring fromâ€ to address such concerns and create â€œan imaginary of a â€˜forbidden landscapeâ€™ that we can strive towards dreaming into beingâ€.

Ncebakazi Mnukwana, an artist well-versed in traditional South African instrumental music, was also highly aware of the potency of words. She crafted her tunes not merely to accompany the words, but to allow vocalists to â€œmove the text to the musicâ€.

In this way, they strove to form a synergised whole, reflecting the confluence of different media, but also of transcontinental conversations about a common postmodern, postcolonial predicament.

Aditi Hunma is a lecturer at the University of Cape Town and a freelance journalist.