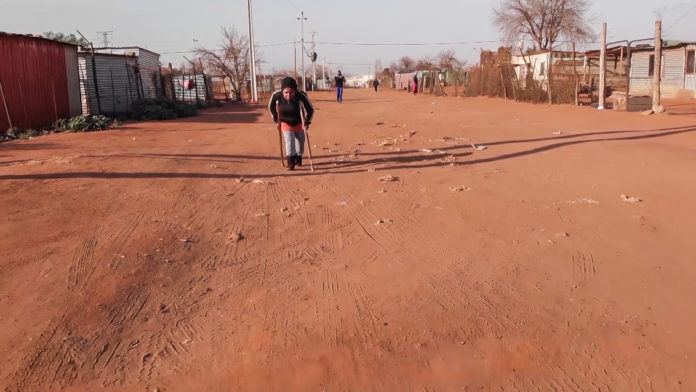 SERI launched the documentary accompanied with research at Constitution Hill on August 16, during Women’s Month. The documentary, produced with Twospinningwheels Productions and Pegasys Institute, featured women with disabilities in the Slovo Park informal settlement, south of Johannesburg. One of the women featured in the documentary is Lydia Lenyatsa.

Lenyatsa is a mother of three who has lived in Slovo Park for 20 years. Due to her scoliosis and short structure, Lenyatsa relies on crutches to move around. A problem with her lungs also means she relies on an oxygen mask to aid her breathing. Lenyatsa shares a standpipe and pit latrine toilet with other families in her community. When she needs to use the toilet, which is outside of her home, Lenyatsa has to ask someone to accompany her. It is also unsafe for her and her children to use at night because the pit latrine is alongside a road. If no one is around to accompany Lenyatsa to the toilet, she often does not use it at all.

“One thing that will change my life is if I see Slovo Park improving to upgrade more, in flushing toilets which is inside the house, which is more comfortable to use, and inside taps in the house also… And make life easier for us people with disabilities,” Lenyatsa says in the documentary.

Barriers to accessing safe water and sanitation severely impacts the access of other human rights such as health, dignity and education, according to the South African Human Rights Council. Women, girls and people with disabilities are disproportionately affected.

Women living with disabilities in South Africa are socially isolated

Government efforts have failed those living with disabilities in informal settlements

The rights of people with disabilities are protected by the South African Constitution. It provides, “Everyone is equal before the law and has the right to equal protection and benefit of the law. Equality includes the full and equal enjoyment of all rights and freedoms.”

However, government efforts have failed to respond to the needs of people with disabilities. People living with disabilities continue to face challenges to accessing sanitation in informal settlements. Challenges include relying on shared toilets and chemical latrines, crawling to inaccessible facilities, inaccessible hand-washing facilities, using alternatives to avoid travelling to distant sanitation facilities during unsafe hours, and physical violence while trying to access outside facilities.

This shouldn’t be happening. Under the Upgrading of Informal Settlements Programme (UISP), municipalities are legally obligated to upgrade informal settlements. Municipalities should engage people with disabilities in these settlements about the tenure rights and services provided through upgrades.

Besides this, sanitation facilities in informal settlements must meet the National Norms and Standards for Domestic Water and Sanitation Services. Facilities must also be easily accessible, convenient, and comfortable for men, women, the elderly, and people living with disabilities. Requirements for privacy and security, space for wheelchairs, level or ramped access, and support structures such as a handrail and a toilet seat are part of the norms and standards.

There is a dire need for these standards to be met to address the needs of the disabled, specifically women and girls.

Watch the documentary below.