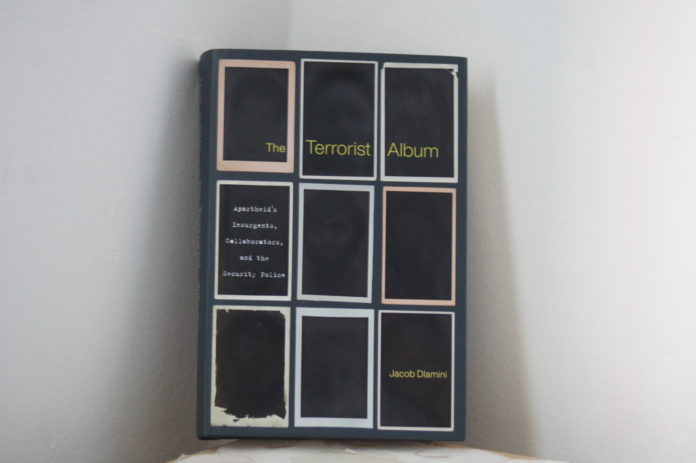 Jacob Dlamini was due to fly down to South Africa from New Jersey for promotions for his new book, The Terrorist Album. However, with the COVID-19 pandemic, his travel plans were put on hold. He chatted to Fatima Moosa about his book and how the distance affects his views of his book.

Dlamini’s previous book, Askari, was released in 2014. It tells the story of an uMkhonto weSizwe (MK) commander who “turns” into an apartheid collabarator. With The Terrorist Album Dlamini continues storytelling centered around the seemingly untold stories of the apartheid era.

When asked about this, Dlamini says writing the two books was different because of the context. When he wrote Askari, the country was further away from end of apartheid. With The Terrorist Album, there is even more distance from apartheid and the Truth and Reconcillation Commission (TRC). Dlamini did a lot of the work in the United States while writing this book. He says that distance might have moderated his anger about the past.

“I cannot pretend to be neutral here. There is a lot about our history – the gratuitous violence, the betrayals – a lot of that makes me angry and makes me sad,” he explains. Dlamini also pointed out that the interview is being conducted on Zoom. He says if the conversation was taking place in person in South Africa, he might have felt differently with the different context.

Inspiration for the book

Dlamini says he left the journalism world after twenty years for academia. This gave him the space to explore South Africa’s contemporary history in greater detail. It was his work as a journalist covering the TRC and growing up in Katlehong, “one of the worst hit places by the violence that accompanied the end of apartheid” which first sparked the interest.

“Both books have one thing in common and that’s they draw significantly on the archive that the truth commission put together.”

With The Terrorist Album, it was the testimonies by former Security Police members before the TRC that got him interested. Many of the testimonies mentioned something called the terrorist album. Dlamini says the book is a result of the digging to find out what this thing was and who used it and how it was used.

“What makes the Terrorist Album so unique is that it’s the first document to target people who have done nothing to oppose the state and no political reasons,” said Dlamini. The album was made up of people who left the country with and without government permission. Both were added to the album.

“We can’t look at the album and assume it can tell us exactly how apartheid functioned and that there is a one-to-one correspondence between the album and the truth,” he says. For Dlamini it‘s important to understand how being in the album marked people for death and to explain to the reader these objectives.

Why is it important to discuss this topic?

Dlamini says there are many reasons why it’s important to know these stories. “The first one is so that those that died and never made it back from exile didn’t die in vain,” he said. It’s an ethical commitment Dlamini believes of telling the story of how people ended up in the album and is a crucial start to ensure their lives meant something.

Another more pragmatic reason to know these stories is that the further away from apartheid’s lived experiences, people tend to have a rosy picture of apartheid. Dlamini says it’s often spoken about how efficient apartheid was. “Well it actually turns out, they weren’t efficient. The apartheid government was the massive wasteful machine that was constantly tripping over itself,” he said. With the book, Dlamini hopes to show that the aparthied regime was not efficient.

Lessons from the book

“There is a need to look at the past as a way of understanding the present,” Dlamini points out. With this statement, he means understanding how the past was structured and functioned. He questions why is that 25 years after the end of apartheid – the label impimpi and collaborator are still some of the worst insults you can tell someone in South Africa. The book aims to create long drawn out but productive conversation about the limits of state power and how apartheid functioned.

“Part of what we have to live with as South Africans is the realisation that apartheid was defeated ethically and morally but not militarily.” With these words, Dlamini says South Africa inherited a lot of systems, habits and bureaucratic practises of the past.

It’s not important to just accept this but to also understand this in order to have meaningful conversation about substantive change. Dlamini asks what does it mean to have a truly public-orientated police service. “We forget that Jacob Zuma during the dark rules of his rule introduced the switch from police service to force. We see that force being used by the police that we inherited from the past,” he explains.

Hopes for the book

Like any author who released a book, Dlamini hopes it gains traction but he doesn’t just want people to read the book. He said he hopes people appreciate what what lessons apartheid has to teach especially at this moment when the world is grappling with the COVID-19 pandemic.

He said these are delusional attempts “to think if only we gave our police more power/if only we gave the military more power we’d be able to contain this.” Dlamini says no amount of investment in police and military powers can actually solve social problems. “You can’t police your way out of a political and social problem,”he adds.  He hopes the book will contribute to discussions around the relations between societies and their police forces, governments and their military.

“I think people need to read my book because hopefully they will get a much more modest but realistic idea of how apartheid functioned.”