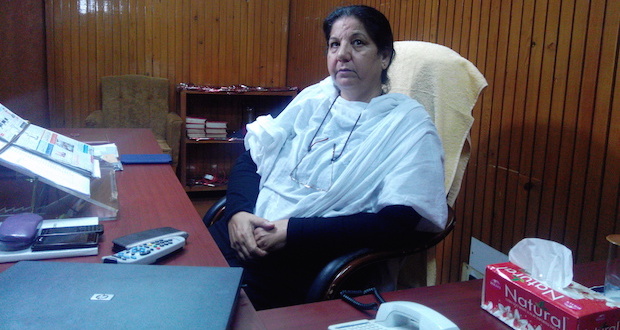 Rates of divorce and domestic violence in the Kashmir valley have seen a rise in recent years. NAYEEMA MAHJOOR, who heads the State Womenâ€™s Commission, shares a grim picture of the family conflicts in this Himalayan region.

Women have suffered through the conflict in Kashmir for the last 20 years but now family conflict is becoming a huge burden on them. People are becoming impatient and there has been a rise in divorce.

There has been a 70% rise in cases of domestic violence. Every day, on average, I get six or seven cases where women are facing torture and ill-treatment by their husbands or their in-laws; there are cases of rape and molestation.

Living in a Muslim-majority society, which is against treating women this way, makes no difference. People may make tall claims about being religious and honest but that is not the whole truth.

We need to change our mindset when it comes to marriage in Kashmir. The in-laws in this society expect women to do everything: they expect her to earn money, to cook, to raise children, and at the same time take care of the whole family. When the girl is brought to her new home, they think a servant has come and that she should do all the odd jobs. Many women commit suicide over this.

There are 1,500 cases of domestic abuse pending with us and the commission has solved 4,500 in last four years.

It is a difficult job, solving conflict between two families. People have lost their tolerance but we try to listen to both sides and help them in counselling.

Women tell me that their men want them to earn money and then hand it over directly to them.The women donâ€™t even have aÂ right to their own money, and the men are not ready to share family responsibilities. This leads to a split in the family.

Another major issue taking its toll on women in Kashmir is harassment in the workplace. This is common practice here but the women prefer to stay silent on these issues due to the social stigma attached to it. If they speak up, they are looked down upon and disowned by the society. They are even blamed for the wrongs that are done to them.

Even in the maternity hospitals, the female doctors are being ill-treated and harassed by males. All fields are dominated by men and they donâ€™t want women to take a lead in it. They want to suppress women.

Despite all the problems, I see that many women are still trying to save their relationships and their marriages. Some are even willing to compromise when theyâ€™ve been wronged. In one case a man had an extra-marital affair. When his wife came to know about it, she accepted it, and she was even okay with him taking a second wife. She didnâ€™t want to ruin the life of her two daughters. But the man divorced her.

My job is to try to solve the conflicts. There are no magic methods but to listen to people and try to help them through counselling. This is a 24/7 job. I get calls till late at night and in the morning when I am yet to have my breakfast; people knock on my doors asking me to listen to them.

We seek help from government institutions and police when there is a need. I personally go to offices and other institutions and inspect the conditions under which women are working. I also try to make men aware about these issues.

This society is rotten, our homes are not safe. We should look after our homes first; only then will there be improvement in this society.

– As told to Rifat Mohidin

This story is part ofÂ a special series by Rifat MohidinÂ on women inÂ administeredÂ Kashmir, their realities, their successesÂ and their challenges.