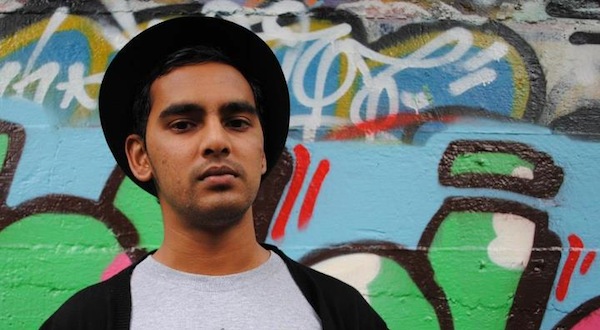 From being two-time winner of the Poetry Africa SlamJam (2010 and 2012), to winning Durbanâ€™s most prestigious hip hop event, the inaugural Life Check All Elements Battle, and participating in prestigious festivals such as the Ordsprak:Uppsala International Poetry Festival in Uppsala, Sweden, Dashen Naicker has established a name for himself as a lyricistÂ  who takes the word seriously, as a vital medium of conscientisation and a potent weapon in the struggle for freedom, justice and peace in the world. Dashen is so immersed in literature and the arts that he even marks his birth and coming of age through literary and artistic events:

DN: I was born, my parentsâ€™ first child, in 1986. The same year Ngugi wa Thiongoâ€™s Decolonising the Mind was published, and the same year the Beastie Boys dropped Licence to Ill. As a child my parents first showed me the many worlds that exist inside books. Later, I would explore these worlds, and discover new ones, on my own. The thrill it brought stuck. Since then Iâ€™ve been, variously, a brother, a graffiti writer, a poet, a lecturer, an activist, a performer, an emcee, a hip hop fundi, and as human as I possibly could be. I hope to continue doing so but with greater and livelier resonance.

This is hardly surprising, considering that Dashen holds an MA in creative writing from the University of KwaZulu-Natal, obtained under the supervision of renowned poet Sally-Ann Murray, and currently teaches in the Department of English at the University of Zululand. Dashen attributes his activism and that of his peers to South Africaâ€™s rich legacy of resilient resistance against oppression and finds himself comfortably at home in the underground:

DN: As much as South Africa has had a history of oppression, it has also, thankfully, had a history of resistance to such oppression. Much of this has been in the form of civil resistance, non-violent revolt against the established system, most notably in the anti-pass campaigns in the 1910s and the Defiance Campaign of 1952. I am committed to assist [and] continue this giant and beautiful history. Also, social systems and spaces have certain norms or obligations which donâ€™t always give one the freedom to act or behave in a way they desire. Iâ€™m comfortable with the space the underground provides. Itâ€™s warm and cozy down here.

The answer to what mainly preoccupies Dashen in the underground is contained in one of his lyrics where he rants:

The crown donâ€™t concern me

Fuse it into synthesis

Inside Iâ€™m an activist,

But people call me lyricist

In other words, Dashenâ€™s hope is that his poetry somehow creates avenues for people to think/re-think through their experiences of society, language, and power:

DN: My word is my weapon. The word holds two invaluable advantages. One, it can be employed as a non-violent form of contestation. Two, it can be a powerful mode of conscientisation. The question remains, how do we become louder than guns? Iâ€™m working on it.

DN: I refuse to accept the current dominant social and cultural norms. Many of these are embedded into our social fabric and have thus become normalised or legitimised. Racism, patriarchy, and homophobia come to mind. This extends to most spheres of society. Why are only women featured in adverts for cleaning products? Is it just women who are expected to clean? Why are the only representations of blacks in media as uneducated, slurring rappers or sportspeople? Are there no black intellectuals? Why violent Muslim extremists are called “Islamists” despite the term Islam being suggestive of peace? Does this not create the perception that Islam is then a violent religion? These create skewed, reductive representations of my fellow human beings and I wonâ€™t kowtow to such bullshit. I feel that alternative views to our current systems are urgent and vital.

Asked what he would write if he were to be asked to produce a manifesto for the anarchist \ underground\ dissident\ alternatives\ rebels\ revolutionaries, the man who once declared that Nadine Gordimer was his “first literary crush”, replies:

DN: I would not want a set-in-stone manifesto that cannot change or adapt to shifts in society and social thought. However, there would be certain guiding principles that I would list as inviolable. These would include: compassion and understanding for fellow human beings, education (whether formal or informal) as indispensable to social being, and non-violence.