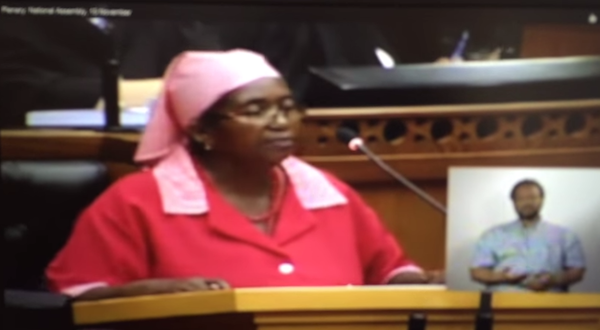 Police were called into parliament on Thurday when Ngwanamakwetle Mashabela, an MP with Economic Freedom Fighters (EFF), refused to take back her comments about President Jacob Zuma.

â€œPresident Zuma is a thief. He is a criminal. He is the greatest thief in the world,â€ Mashabela said.

Cedric Frolick, an ANC MP and house chairperson at the time, asked Mashabela to withdraw the statement, and when she refused, she was ordered to leave the House. When she didn’t leave, the police came and forced her out.

An unarmed female MP being physically dragged out of the National Assembly by the police as instructed by the ANC. pic.twitter.com/bkaPKqECDw

Of course so much happened that day; pushing and shoving. The throwing of fists and and bludgeoning. It was mayhem in parliament.

But few appear to have seen the speech that started it all, or at least one part of the ruckus.

Check it out below: