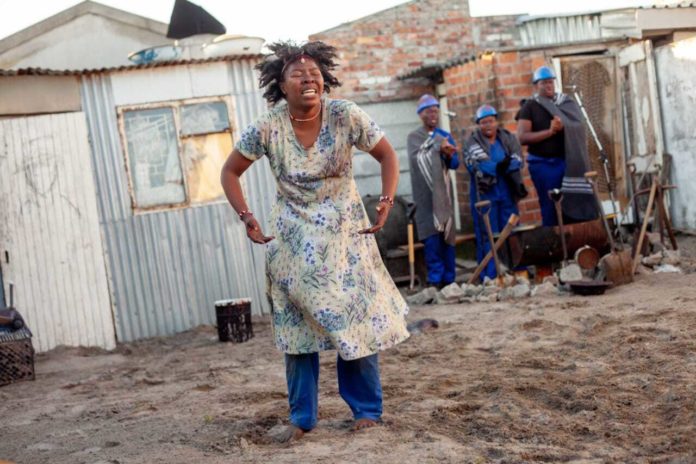 Director Mhlanguli George is bringing the theatre to people’s personal and private spaces.  For over a decade now, he has been staging plays in people’s backyards. George is reimagining theatre to make it accessible and immersive.

Origins of the idea

George’s love for theatre started while he was studying in Ginsberg in the Eastern Cape. He started acting in grade nine, and knew immediately he belonged on stage.

Theatre in the Backyard started in 2012, while George was focusing on community development. He was teaching children after school, and wanted to look at new ways of creating theatre. The Theatre in the Backyard was created so that non-theatre-going people could access the theatre. He says the idea emerged from an artistic curiosity to find out what happens in people’s backyards.

Theatre in the Backyard uses actual backyards as the sites for theatrical productions. A group of actors without an auditorium or stage use any props available to them. The performers and audiences share the same space, and there is no dedicated seating.

“Our families and people in the community who want to watch theatre are forced to go to town, to what they would call mainstream theatres. I started this so people in communities can access theatre,” George said .

“We push the boundaries and break theatre rules. We include the audience with the work that we do. There is no stage, there is no auditorium – we create pieces that resonate with communities. These are the raw and real stories of the South African backyard,” George said.

Government is failing the arts in South Africa

George told us the department of arts and culture are failing artists and creatives dismally in South Africa. The hard lockdown in South Africa affected the livelihoods of many artists.

“I feel the department doesn’t care about us as artists, nor do they make an effort to understand the importance of creative work in South Africa. Artists were protesting by even sleeping outside of the National Arts Council (NAC) offices,” George said.

In March 2020 a group of 30-50 creatives staged a protest outside of the NAC offices, demanding outstanding payments of the Presidential Economic Stimulus Package (PESP) of R300 million. The PESP focused on job creation and retention for artists, creatives, cultural and heritage sector workers. Applications were assessed and some recipients received funds.

The protesters claimed  the NAC made decisions to recall or revise contracts and cut allocated funding, and that money may have been misappropriated. “I think we need a different leader in the department, and people who actually show they appreciate the creative industry,” said Geroge.

George told us that artists are always fighting for financial support from the government, and it goes unheard.

He said artists rely on support from entities like the Goethe Institute. The Goethe-Institut is a German cultural institute. The Goethe-Institut Project Space (GPS) grant partners with art professionals working in South Africa.  Supported by GPS, in 2019 George collaborated with musicians and performers from Emalahleni and Secunda in Mpumalanga to create four performances that were presented in yards in Lynnville, Ezinambeni Phase 4 and Embalenhle.

George says he didn’t have an income in 2020 and couldn’t create any productions. He was assisted once more by the Goethe-Institut who recommended his work to a Dutch radio station. During level 5 of the lockdown he wrote a short radio drama script, and recorded this with his wife on his mobile phone.

George plans to take theatre in the backyard all over South Africa. He wants to create new productions in each province, and present this medium of theatre at an education level. “I want to take this model of creating and staging theatre to tertiary institutions; where there is a drama and dance department. So that this can be recognised as a new way of presenting theatre. It is all about accessibility of the arts,” George said.

“My advice to any creative person is to keep doing what you love. Don’t give it up. Keep working and creating. The funding will come. Never give up,” said George.