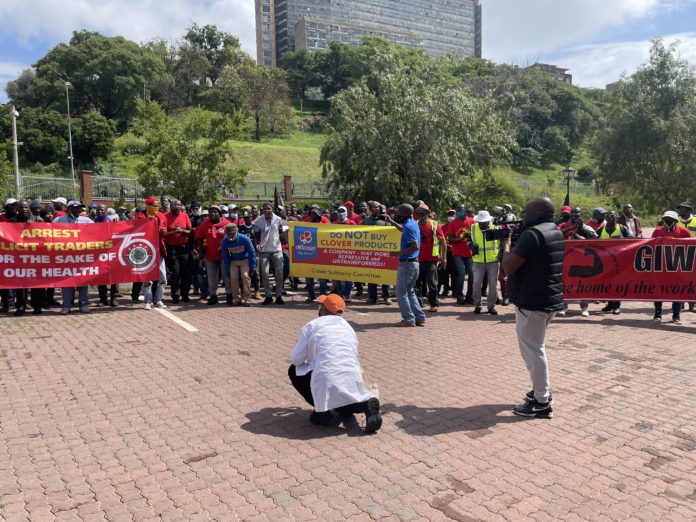 In the build-up to the 2022 Budget Speech, various sectors of society are calling for a more engaged budget process. The government themselves have been involved in the economy to promote social outcomes. Many of these formations have been part of a united call for the government to intervene in defence of Clover workers. These groups claim that there is significant economic merit in the divestment campaign against Clover’s parent company, CBC-Milco. Not only does the company operate in Palestinian occupied territories, but it is stripping small towns of manufacturing capabilities, decimating jobs, and deepening the food insecurity crisis in this country. Since November, workers have been striking against the company to save their own livelihoods and to promote policies of inclusive and sustainable economic development.

When Milco SA acquired Clover, the Competition Tribunal imposed a three-year moratorium on retrenchments. However, in 2021, close to 2000 jobs were cut as waves of workers were left with little choice but to take severance packages. Those who remained were forced to take a 20% cut to their salaries, and, in some cases, to relocate across the country. A further 824 jobs are on the line with factory closures scheduled for the end of February. In recent months, Clover has stepped up their bid to cut jobs, drive down wages and impose more strenuous working conditions. In response to this, workers have had to resort to a gruelling strike against the imperialist consortium.

Unions have expressed fears that the company is being hollowed out to accommodate the dumping of Israeli goods into the country. These are credible concerns emanating from the devastating impact of Milco’s takeover. By the end of Milco’s restructuring process, 11 out of 15 Clover factories will have closed down. Large-scale job losses and factory closures are likely to decimate local production, making way for imported products from CBC-Milco’s Israeli subsidiaries.

CBC-Milco has extensive operations both upstream and downstream of Clover’s core business. Many are geared to step in after merger-specific clauses on local procurement expire later this year. Several South African businesses risk losing some of their biggest contracts with Clover. One example is Dairy Group – once a part of Clover but later sold off by Milco – who have had to issue retrenchment notices after Clover closed down operations in its Lichtenburg facility.

The separation of Dairy Group from Clover is a clear example of how Milco has actively worked to disentangle Clover’s business interests from broader sections of South Africa’s economy. Dairy farmers no longer have a stake in the company, and are thus unable to provide internal opposition to Clover’s restructuring. Similar tactics have been employed at the factory floor, where labour brokering has impeded collective bargaining rights. While workers and dairy producers do not have a stake in the company, Clover’s top executive management was given close to R170 million in interest-free loans to keep theirs and Milco’s interests united. The call for government intervention in Clover is a call to reverse Clover’s extractive restructuring, and instead to align the company’s interests with broader sections of society and the developmental goals of the country.

Government, labour, and communities all have a shared interest in Clover being a thriving job creator, manufacturer, and food producer in this country. The project of inclusive growth is widely influential amongst development policy discourse. The idea that economic growth in South Africa should be labour-intensive, enhance manufacturing capabilities, and promote rural economies is touted by experts across the ideological spectrum. For this to happen, stakeholders’ interests must align. Considering the difference between the CEO’s reported R40 million annual salary relative to the average worker’s, the disparity of incentives is especially large. With the World Inequality Database estimating our Gini coefficient at 0.76, many agree that the country cannot afford to pursue economic growth at the expense of further unemployment, precarity, and inequality.

The austerity measures taken by Milco after buying Clover is not dissimilar to those taken by Walmart and Anheuser-Busch InBev after acquiring Massmart and SABMiller respectively. These form part of a growing trend of multinational companies promising investment but instead extracting resources, imposing layoffs, and exploiting labour in South Africa. Whether or not the fears of dumping are true, the reality is that Clover’s streamlining will have long term negative impacts on local production and manufacturing in rural South Africa. An inclusive economic framework needs to ensure that investment in the country serves the population, rather than operate on extractive principles that lead to underdevelopment.

By closing down of plants and depriving thousands of families an income, Milco will exacerbate the economic malaise in South Africa. Unions argue that instead of this, it would make more sense to stimulate the economy. Worker demands for nationalisation under democratic worker and community control allows for greater responsiveness to community needs, production that is less extractive, and state support to enable competitiveness. Unions have consulted with the department of trade, industry, and competition, as well as the Industrial Development Corporation, who have agreed to research models for communities to takeover affected branches in Lichtenburg, Frankfort, and Heilbron. Examples of successful worker takeovers are widespread from India’s Sonali Tea Estate to South Africa’s Zenzeneli Clothing and beyond. Under various forms, these takeovers have saved jobs and companies on the brink of ruin.

Entangled within this web of retrenchments, underdevelopment, and extraction is the pertinent issue of CBC-Milco’s complicity in Israeli apartheid. It has factories on occupied land, and uses Israeli mobility privileges to lock Palestinian competitors out of their own markets. Unions and progressive sections of civil society have united in their call for the company to be kicked out of South Africa, and for Clover to be transformed into an inclusive organisation that creates jobs, develops skills, and provides nourishment to those who need it.

Unions trace a direct link between the CBC-Milco takeover, and the scale of restructuring that is decimating jobs at the company. In laying out an alternative, workers have called for the state to intervene by helping them takeover Clover to build a socially responsive and democratically managed dairy company. By absolving Israeli shareholders of their interests and restructuring the company in workers’ favour, Clover can contribute to skills development, manufacturing capabilities, and food security in this country.

Mahfouz Raffee is a researcher and organiser for the Palestine Solidarity Alliance.