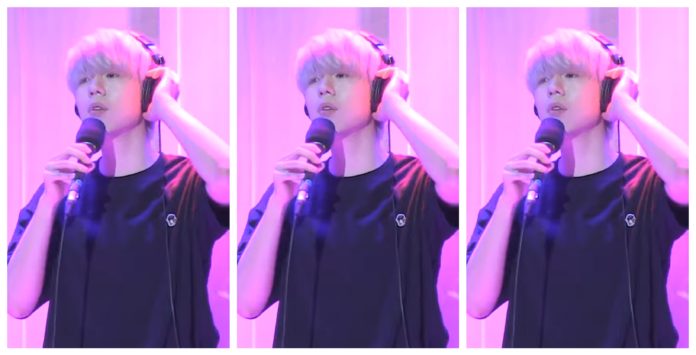 South Korean singer, songwriter and producer, Gaho released his first full-length album, Fireworks on November 23. Gaho is most famously known as the voice behind OSTs like Start Over from Itaewon Class and Running from Start Up. But the singer now has his own album. The Daily Vox had an interview with Gaho about the album and more.

How does it feel to be coming out with your first full album?

I’ve been preparing for this album for a year, and I’m so relieved that I’m finally able to release it for the whole world. On the other hand, it’s kind of a bittersweet feeling. I think it would be great if a lot of people listen to it and give me feedback. Please listen to it a lot!

What is the feeling of releasing this album following the great successes you’ve had with your singles and the various OSTs?

Up until now, singles are not enough for me to express my musicality. But as I could showcase various genres and colorful musicality through a full album, I had high expectations even before the album was released. Thankfully, many people like and show interest toward the album, and it makes me happy. I’m trying my best not to be satisfied with the current condition and will work harder so that more people will listen to my music.

What was the process of creating this album like?

I’ve been working on this full album for about a year. Since I compose, write lyrics, and produce everything by myself, I realized that there are so many things to do. After I finished preparing the album, there were many other things to do such as the shooting for the music video, album jacket, profile photos, and more.  It makes me think that preparing a large-scale album really takes a long time.

In the teaser, it hinted that you had allrounder participation in the album – what was the process like?

The company recommended the keyword “All-rounder musician”. During a meeting, they were saying that I’m a versatile performer who writes lyrics, composes, and produces songs. Then I was like… it’s a bit embarrassing but at the same time not a bad title, and we decided to use it. Because it’s my first full album, I did my best to prepare everything so it was fun and rewarding.

Did you have difficulty deciding which songs made it to the final album?

As I have many songs that are piled up in my archive, it was difficult to choose them. So the 25-years-old me picked songs that would suit the theme of youth who would have similar thoughts and concerns as I do, and so the song list was quickly made, and I think I completed the full album tracklist faster than I thought.

What can fans expect from the album?

Since there are not many days where people can feel overwhelming emotions in their lives, I hope that they will feel the ‘overwhelming’ feeling through my song. I think that ‘feeling touched’ during special moments is one of the most precious feelings in our lives. I hope that my song can be a starting point that gives hope to young people who are going through difficult times in their lives.

What is the message of this album?

What are some of your favorite songs from the album?

“High” is a song that expresses the most special emotions among all of my feelings, so I like it. “Lost my way” is my favorite song, it’s a song that contains my worries and I actually wanted to use it as the album title.

How would you describe this album and sound?

Overall, I think it has a pop and r&b feeling. There is also a touch of jazz and rock. I try not to be a musician who can only do one type of music, so I make a lot of colorful and diverse music that is based on pop.

What message would you like to send to your fans in South Africa and around the world?

I hope that the current situation can get better as soon as possible so I can meet you in person and perform on a big stage. I also hope that you can find comfort through the songs in this album, as they contain my many concerns and emotions, and that you won’t lose hope. Always be healthy and I’ll meet you soon. Thank you always.

All credits for promotional material goes to: Global PR and Marketing by MJ TONZ Entertainment.