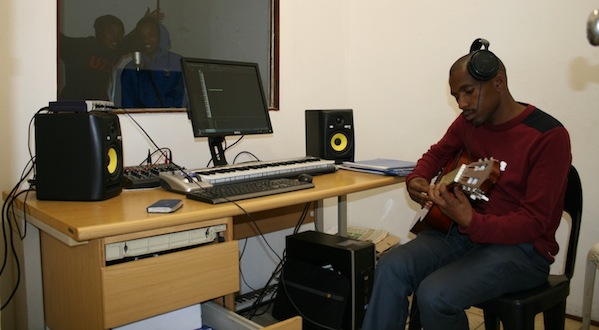 Marikana wasnâ€™t even a dot on a map before August 16, when the shooting of 34 striking miners madeÂ headlines of the dusty mining town. After the violence of that day, and a months-long strike on the part of Amcu union members, it is still a focal point for the media. But the concerns ofÂ MarikanaÂ residents do not begin and end with the mines.

â€œAll journalists do is come here for miners, as if the rest of us donâ€™t exist,â€ said Thando Siwisa (20). Siwisa doesnâ€™t work in mining. He is a musician and producer.

Siwisa, together with Disang Muduledi (29) and Lesiba Masale (23), are the proprietors of a company called Fanakalo Media Solutions (FMS). Its name refers to the Nguni pidgin language created as a common tongue by migrant labourers who spoke different languages underground. Fanakalo is rooted in the history of mining culture in Southern Africa and the three men chose the name because it reflects the heritage ofÂ Marikana.

The business was registered only recently but Siwisa says its aim is to use the arts to raise awareness about pressing issues in the community, to empower young people and to create alternative jobs in their community.

â€œNot all of us want to be miners, or even desire to work in the mining industry. But inÂ Marikana, that is all you can do,â€ said Muduledi, who is the founder of FMS.

â€œWe decided that we will not let our passion for music die because we live here.â€ The company helps aspiring local artists to record their music.

â€œThese artists are not even well known and maybe never will be, but they are happy to just be in a studio andÂ recordÂ their music,â€ says Muduledi.

Most cannot afford to pay anything for the service but in such cases, the fees are waived, and the studio has become a place frequented by young people looking for something to do with their time.

It is better, Siwisa says, than the alternatives of recreational drugs and crime.

Masale, also a musician and producer at FMS, complains that mining companies have repeatedly rejected their applications to do skits during the mine safety road shows organised to promote safety.

During most mine road shows, safety is taught to miners through the use of art; be it an interactive play or catchy song.

â€œThe mines would rather outsource these services from outsideÂ Marikana, than support us. I think we understand how people here think better than anyone because this is home for us,â€ he said.

â€œWe want to give back to our community the best way we know how, which is through music. All we need is an opportunity.â€

In the aftermath of the strike, which ended on June 26th,Â MarikanaÂ and the surrounding villages and towns have come alive again.

AtÂ ten oâ€™clockÂ in the morning the market-likeÂ MarikanaÂ Shopping Centre is already crowded and local shops owners are getting business, which had become almost non-existent in the past month.

The FMS office is tucked away behind a local store, away from the bustley of the shopping centre.

â€œWe are supposed to be paying rent, but the owner of this place has been kind enough to not want any just yet,â€ says Muduledi.

The young men are disappointed in the surrounding mines and the local government, which they say has also turned down their funding requests. Even so, they are determined to see theirÂ Â studio flourish.

â€œWe want this place to be a place of hope for the young people in our community, to show them there is more to life than working in the mines, especially if you have other passions,â€ says Siwisa.