Home Sexual Violence These women are learning to kick ass: â€œI need it so that...
WhatsApp
Facebook
Twitter
Email
Print 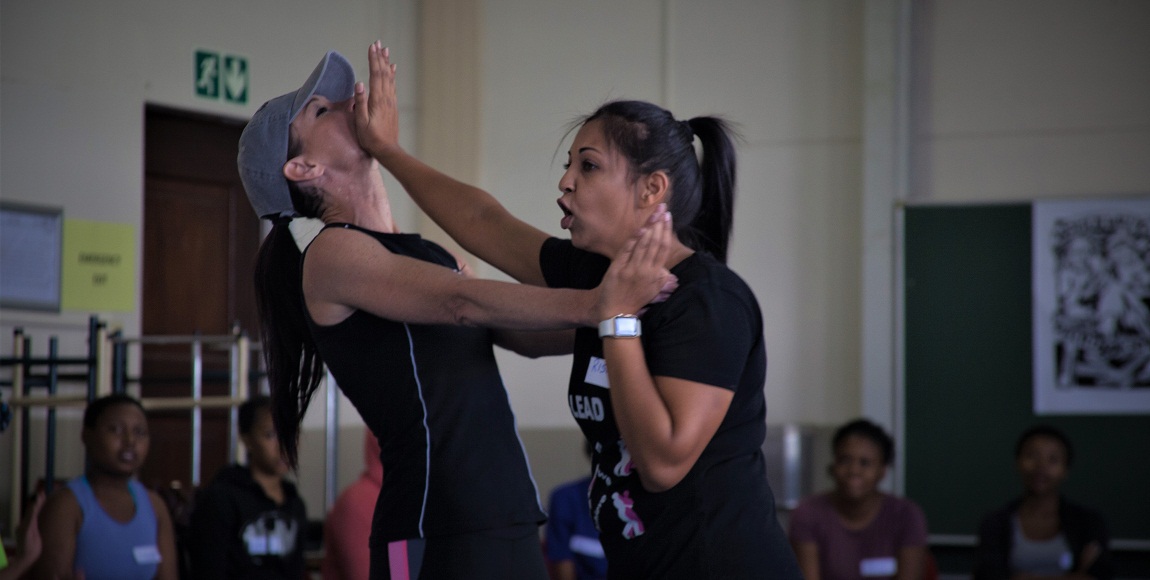 On Sunday, the 1in9 Campaign, i-LEAD and Soul City Institute hosted an empowering self defence class for women as part of the #SafeTaxisNow campaign. Around 40 women, young and old, filled a room in Wits Universityâ€™s Robert Sobukwe building, and energy levels were high as they kicked and punched attackers in the form of boxing pads. Shouts of â€œNO!â€ filled the corridors of the building as the women were taught to use their strength in various ways to defend themselves. The Daily Vox asked some of the participants why they felt the need to learn self defence. Dudu Mathebula, 33, pictures editor, Johannesburg
Where we commute, thereâ€™s always a guy following you, trying to take something from you. I think itâ€™s imperative that weâ€™re all here, to try and at least learn something in order to protect ourselves, against men in particular. I believe in a society where women come together to do something productive, and I think this is one of them. I think women need to stand together, stand up against the scourge thatâ€™s happening at the moment. I feel like such classes are important, itâ€™s important that we equip ourselves because the likelihood, in the country that we live in, itâ€™s very likely that we will get into a situation one way or another where we have to defend ourselves.

Rosha Patak-Harie, who founded i-LEAD, started teaching self defence to women after an attempted kidnapping five years ago where three men tried to pull her into a vehicle in central Johannesburg. She protected herself from the attack with â€œsimple moves which I said every woman must know.â€ Mihlali Mqushulu, 18, student, Johannesburg Central
I just feel the need to learn something in terms of self-defence. Iâ€™m supporting this whole protecting women [movement] thatâ€™s going on, because Iâ€™m against violence against women. I just feel the need to learn how to protect myself. Itâ€™s [from] strangers because, itâ€™s the weirdest thing, youâ€™ll just get attacked randomly. I feel the need to always just be prepared, and know that, if itâ€™s likely [that I will be attacked], at least I can defend myself. Say the person is drunk so his reflexes are not working properly or something, at least I can protect myself by knowing the basics.

Patak-Harie left her corporate job, got in touch with a martial arts instructor and has since been helping women take on the baddies. They put together a programme with several martial arts forms which she said would be beneficial and simple.

Shirley Ndaba, 28, Johannesburg Central
Honestly I donâ€™t feel safe. As a woman, and as a lesbian, I donâ€™t feel safe as either anymore. Especially from men, I donâ€™t trust any man who follows me these days because you never know. With all these kidnappings and all these deaths that are caused by men, I need to learn this because itâ€™s gonna save [me]. I need it so that Iâ€™m able to survive. At least it will help [ensure] that I donâ€™t go down without a fight. You canâ€™t even trust anyone these days, no one, not even your uncle, not even your cousin. Some of them, maybe theyâ€™re brothers but you canâ€™t even [trust]. Weâ€™re not just saying [it is all] men because we also do have brothers. But maybe youâ€™re different in the house but youâ€™re something else outside, you know?

The work of i-LEAD doesnâ€™t stop at self defence classes. Patak-Harie is currently using her IT background to build a self defence app for women in shelters, survivors of trafficking, and sexual abuse survivors. â€œWomen in wealthy, middle class communities have access to training facilities; women in the poorest communities are often targeted so we focus our efforts there,â€ she said. *Amanda Ndlovu, 25, Vosloorus
Iâ€™m here to teach myself how to defend myself. With the recent crime rate in SA, and all the killings and abductions of women, thereâ€™s a lot thatâ€™s happening and itâ€™s scary, itâ€™s terrifying. So I think [these skills] are essential to learn. I have to learn to defend myself when Iâ€™m out there, because being aware is not enough, you need to have the skills there. I think itâ€™s mainly men [we need to protect ourselves from] because theyâ€™re the ones who are doing all these things.

The class taught women how to use their comparatively smaller bodies to their advantage. Patak-HarieÂ said men have more upper body strength so women need to know how and when to attack, â€œIf we are in that situation, [we need to know] how we best can get ourselves out of that situation.â€ *Megan Dube, 23, Student, Johannesburg Central
I would like to have some sort of defence for myself. I am currently living in South Africa for the next one and a half months. Since I feel not-so-okay going into certain places, and I feel okay in my own country [Zimbabwe], I would like to feel like that, like I can go everywhere and Iâ€™ll be fine. You know the instinct that you have in you which tells you, â€œIâ€™m not okayâ€? Itâ€™s that one, itâ€™s the alarm bells that ring. I think I want to protect myself against that feeling of not feeling safe, those alarm bells. Like if they go off, I can say, â€œno, Iâ€™m fineâ€ and I know I can handle whatever comes – except if itâ€™s a gun.