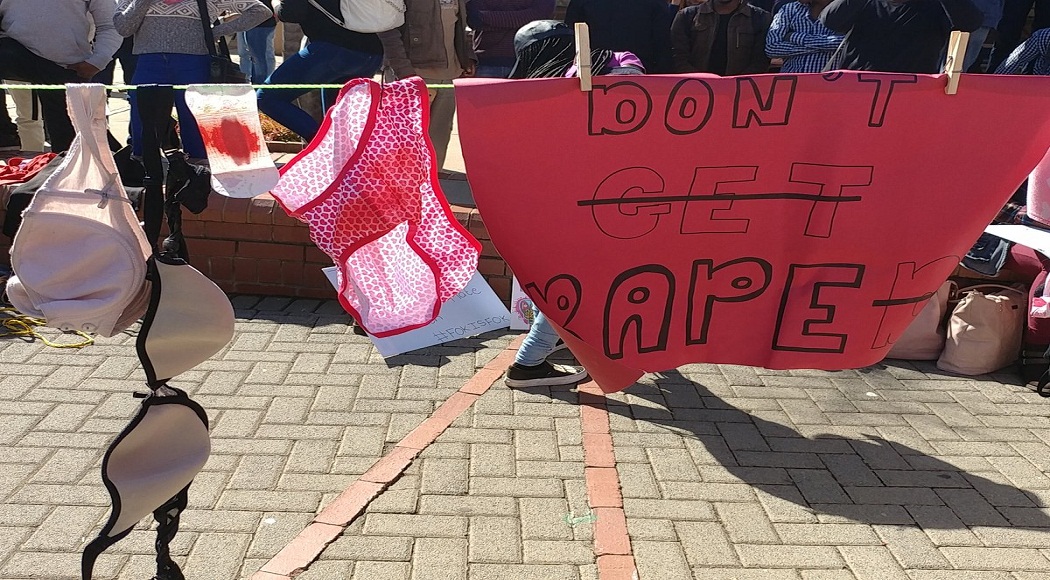 The University of the Western Cape (UWC) – #KhangaUWC

Students at UWC are calling out their university’s apathy, accusing management of ignorance and neglecting rape and sexual violence cases.

Khanga is a collective whose objective is to obtain justice, end rape culture, assault and all other forms of violence +

Khanga refers to a poem written by Fezeka Khuzwayo, or Khwezi, who accused President Zuma of rape in 2005. In April 2008, Zuma was found not guilty of raping her. Khwezi performed her poem, I am Khanga, wearing khanga (a traditional cloth) at the opening of the exhibition “Identity, Power and Connection”, at the Afrovibes Festival in The Netherlands that year.

The #KhangaUWC movement comes in the wake of #3days4girls which refers to the instance where four women were sexually assaulted at UWC from April 22 to April 24. Students had said the university was silent on the matter: that no communications had been sent out, and that management only responded to students when fees were outstanding or students caused damage on campus.

Students protested again on Friday, 12 May, under #KhangaUWC, following an incident on Saturday, May 6 when a third year student was raped by an unknown man. CCTV footage shows the man stalking and following the woman into a campus bathroom. The student came forward about her rape to the Cape Times.

Programme leader of Edu-Drama, part of the Gender Equity Unit at UWC, Akhanya Chole told IOL that they were dissatisfied with management’s response. Chole said management is doing nothing to combat rape.

The problem has been ongoing. Last year, Edu-Drama had received accounts of sexual assault and rape on campus. The students held a Rape Culture protest last year and brought issues to management, who failed to respond adequately.

UWC spokesperson Luthando Tyhalibongo said there are security measures in place and that the university has taken action against those perpetrators of sexual violence. Tyhalibongo also said a reference group was set up by the task team for consultations.

Students donned black and demonstrated on campus holding up placards. They marched around campus, stopping outside the pub that the woman who had been raped in the bathroom was walking back from. Students were silent, to highlight the silence from management and the lack of repercussions for rapists.

Protesters called on men to rise up against rape culture.

University of Pretoria (UP) – #UPResCrisis

On Tuesday UP students UP demonstrated on the universityâ€™s Hatfield campus against rape culture. This was part of a campaign called â€œUP safety is a lieâ€ under #UPRapeCrisis. Â One of the protesters told Perdeby News, UPâ€™s student newspaper: â€œWe are unsafe in this space. Women are getting raped, women are getting sexually violated in their own residences.â€

Students say not enough is being done by the university to combat rape within the student environment. @perdebynews pic.twitter.com/i6mq0ZNYrN

Protesters wanted to draw attention to rape culture and the way rape survivors are victimised while their perpetrators walk free.

Management responded saying it was revising its policy on sexual harassment. Spokesperson Rikus Delport said that a process of engagement was already underway since last year to improve awareness. Delport also said the university would not hesitate to take action against perpetrators. â€œThe safety of our students and staff remains our highest priority,â€ he said.

#UPRapeCrisis protest today. Security personnel was more concerned about who put up bras and underwear at the CSC. Not about the rape cases. pic.twitter.com/mcCgzgh5UN

Clearly, the protesters were onto something when they called rape culture out on campus that day.

Hours after the protest on Tuesday night, social media erupted when pictures surfaced of men at UP holding posters with misogynistic and offensive slogans. The posters were held up during a Serrie residence dance performance and were meant to distract the women performers.

We see this year after year at TUKS RES. This is how rape culture is formed and nurtured. @eNCA @News24_Pretoria @Beeld_Nuus @SABCNewsOnline pic.twitter.com/eHmcC0pcTB

Some students dismissed it as â€œres cultureâ€ but folks on social media were disgusted. Democratic Alliance spokesperson Phumzile Van Damme, and others, questioned whether UP and its students understood that they were complicit in perpetuation of rape culture and sexism by turning a blind eye to the â€œres cultureâ€.

University spokesperson, Candice Jooste, said the university is looking into the matter.

Stemming from #KhangaUWC is #KhangaUCT. It is a response to the rape crisis in South Africa and the silence by the universityâ€™s management about rape on campus.

Students wore black, held up placards and moved through the university on Friday morning.

The students highlighted the importance of learning consent to assist in the dismantling of rape culture.

The movement aims to gain national attention. Speaking in front of the Jammie steps, a student read said that the movement wanted to â€œspeak out, get attention and make a change.â€