Home As Told to “I think a black woman’s body is godly and its beauty should...
WhatsApp
Facebook
Twitter
Email
Print 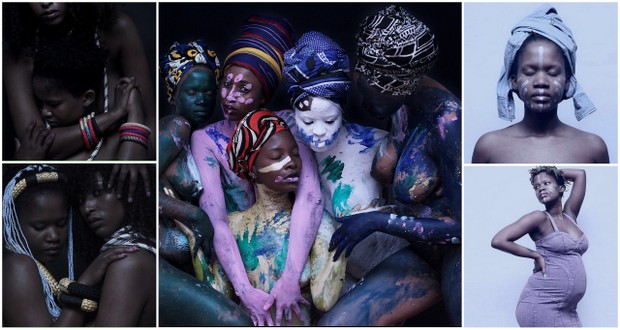 PHINDILE THENGENI – “the girl from next door” – is a conceptual stylist, graphic designer and creative director who is inspired by black South African women. Her use of digital media and photography attempts to decolonise beauty by asking a simple question – Does This Suit Me?

The project came about when I found myself having creative ideas that I considered art but I knew that I couldn’t easily get into a gallery so I created my own gallery on Instagram – @uphindi_wasenextdoor in collaboration with photographer @liamlynchphoto.

I have wanted to inspire a conversation with every single one of my Instabitions [Instagram exhibitions]. The collection of work is called “Does This Suit Me?‘ At the start of the project in 2014, I was passionate about fashion and styling. I would play around with male clothing and still make it look good. Women can also be androgynous and own it. I think masculinity is a kind of performance that can also be owned by us as women. The option has always been there and it doesn’t make us less desirable. The second series was about exhibiting my styling abilities but it turned out to be something quite different from that. It was quite African and spiritual. We were bare skinned wearing a range of Cape to Jozi African jewellery. This one was popular among creatives and my Instagram followers. It was at this point when I realised how powerful it was to use my black female body as a canvas. Women should no longer be judged about what they are wearing. There is a lot of nudity in my work but I don’t want it to be sexualised. I think a black woman’s body is godly and its beauty should be celebrated holistically.

As time went on, I no longer wanted to drive the stylist perspective. I wanted to experiment with different ways of displaying clothing on the body. Catalogues usually have a picture of someone wearing denims in a way that is no different from the next. My ideas inspired popular stylists who sold the concept to big clothing brands. Actual creative directors are sitting at home unemployed and unrecognised while the ones that are employed by big agencies are rubber ducking off of [imitating] peopleâ€™s ideas. I stopped using clothing at this point and started to explore other media. I thought about projecting patterned fabric onto the body. The magic of coloured patterns being projected onto a black womanâ€™s body was exciting for me. I used different skin tones and body shapes just to see what would come out. Sometimes an artist has no other inspiration but curiosity. How the silhouettes and the patterns had a conversation of their own was interesting for me. And sometimes thatâ€™s just it. The work is an exhibition of my imagination. My mind started exploring the anxieties of colourism and difference. I have a problem with this notion because women of a certain hue are seen differently to others. I wanted to show the beauty, simplicity and innocence of dark-skinned black woman. The use of flowers, a simple red cloth and a face without make-up was just enough to highlight her features. Dark skin is prestigious, clean, immaculate as well as breathtaking. The last Instabition was a gesture in gratitude to all the women who had helped me in the previous projects. Having worked with all of them, I was aware of their different body types. I had just given birth to my son and my belly was still big. Another one of the women was newly pregnant and another felt insecure because she had put on some weight. Our bodies change over time and I think this must be celebrated. I told all the models to choose their own colours and paint themselves. It wanted to showcase black sisterhood in a less conventional way and to show how powerful we are as a collective. I also want to instil a level of confidence in all women to love their bodies and to feel comfortable in them. So much art happens during the production phase. It was important to create the kind of environment where each individual was comfortable with their body and individuality. I think these images are so powerful because the atmosphere was enabling. My body has changed again but I’m looking forward to reinventing the concept with a different focus. I also want to collaborate with other creatives I met along the way. As my imagination grows, so should my work. I think that is what I’m most passionate about right now; change and growth.