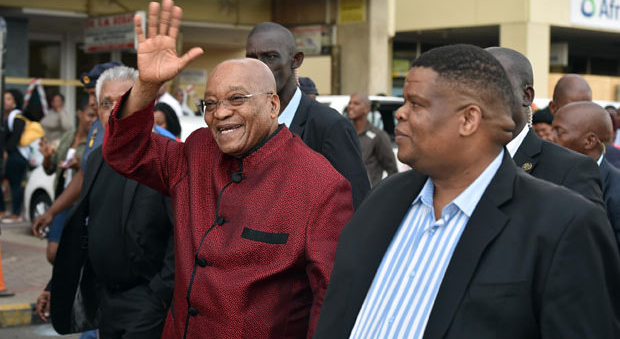 David Mahlobo, the minister of state security, hasÂ dismissed claims that an alleged â€œthird forceâ€ was behind the violence against foreign nationals Â â€œWe [the government] have never issued a statement saying that there is a third force involved,â€ he said. â€œWe have been consistent in saying that there are instigators and we are following up.â€

Mahlobo as speakingÂ to Power FMâ€™s Tim Modise on Wednesday morning to clarify the governmentâ€™s position on theÂ â€œthird forceâ€. This came afterÂ Zulu King Goodwill ZwelithiniÂ told people attendingÂ an imbizo at the Moses Mabhida stadium on MondayÂ thatÂ â€œgovernment agrees with me that there is a third force and we need to fight against it.”

The kingÂ is widely believed to have sparked off the recent spate of violence with his address at a â€œmoral regenerationâ€ event in Pongola last monthÂ when he reportedly said: â€œWe are requesting those who come from outside to please go back to their countries.â€ He’s since deniedÂ saying this.

Army to support police
CommentingÂ on the SANDF deployment earlier this week in Alexandra, Mahlobo said that the decision had been taken to strengthen security and that the army had been deployed to â€œsupport the police in their operationâ€.

“We want people to move on with their lives (and) identify problems so we can address them,” he said adding “We should know as authorities [what is going on], but communities have a responsibility to share information.”

Listen to the full interview:

– Featured image: State security minister David Mahlobo and President Jacob Zuma in Umlazi, Durban, to speak to locals about the xenophobic attacks. Via GovernmentZA on Flickr.Â