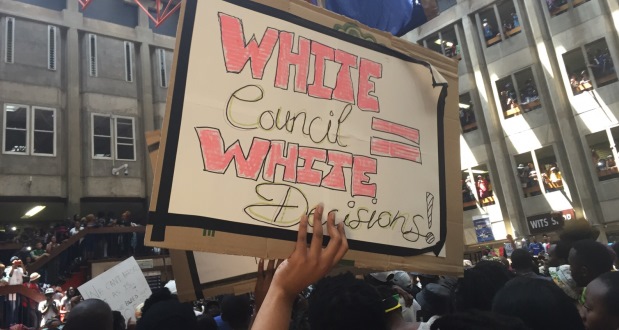 Movements are sustained upsurges of people against X. The key word here is “sustained”. Will there even be a Fees Must Fall movementÂ by February 2016?Â And what will it take to ensure the movementÂ doesn’t fizzle out? ARI SITAS considers.

The entire university system in South Africa is in crisis. It calls for clarity of thought and it commands of us to be intellectuals, as opposed to floaters taken by every current of feeling or cheap politicking. Everyone who believes in one cause or another is riding the wave thinking that while surfing on the upsurge of student discontent, they will determine the shape of the ocean. Reading the social media, it is as if the subaltern has already been spoken for.

Furthermore, we are clear after Daniel de Kadt’s analysisÂ of how the political parties were and are mobilising around it through social media, that we are being used through our networks. We have also seen the pathetic attempts by Mmusi Maimane, Floyd Shivambu and the ANC Youth League to use the protests and their discontent as a sectarian platform. We have witnessed the stand-off outside Luthuli House and we know that more than symbolically, the ANC will not â€œsit downâ€ if it is about a politics of humiliation.

The national movement spawned by student action is about free education, or better appropriately-funded post-school education. It is also about in-sourcing. Beneath these clear demands there are a range of others: from curriculum and university transformation (#RhodesMustFall) in the elite universities to marginalisation on campuses like the Soshanguve one at TUT. Some demands will be about the meaning and content of education appropriate for a post-apartheid institution, others about the consequences of the prior merger processes and others about corruption, patriarchy and ethnic chauvinism.

Movements are sustained upsurges of people against X. The word is sustained. They involve coordination, consolidation of material and human energies and strategy. The outburst of social movement activity is no guarantee of its sustenance and, as there are too many organisations; NGOs; funders and parties out there that would love to take a slice, this will be a testing time for it. Assuming that it does not fizzle out and that by February 2016 there is a movement, there are two strategic nerve-points it has to address:

1. Contesting government priorities
Ensuring that those in power decide on the redistribution of resources towards free/fully-funded tertiary education. This wonâ€™t be easy, because there has to be a transfer of major resources from A, B and C to D. And there are heavily, protected interests in A, B and C. It will not be about rationality but about power: social development wants an increase of its share, economic development needs a doubling of its budget; fighting unemployment is more important than academia, there is a water crisis and there is a nuclear deal looming etc. There will be immense contestations in shaping government priorities. Then comes the internal struggle within each university, how do national and private assets get disbursed and towards what.

2. Challenging outsourcing frameworks
Ensuring that public administration is reviewed and public entities are taken out of their neo-liberal, privatising and outsourcing frameworks introduced between 1994-2004, so that insourcing prevails as good practice. This will run against the enormous profits made by multiple interests, white or black, who have been outsourcingâ€™s beneficiaries and the legal, accounting and professional consultancy services. This will by no stretch of the imagination mean an end to outsourcing as such in the private sector as the world economic system is highly dependent on it for its value-chains from Beijing to Sacramento. But at least, it will give a new dispensation for workers in public institutions.

Whereas the former demands the centrality of a studentsâ€™ movement that knows what it wants and wants what it knows, the latter calls for in-principle alliances with public sector trade unions, associations and entities beyond the university system.

Assuming that both are achieved, this does not mean that inequality between institutions or issues concerningÂ transformation and curricula are solved.

Institutions are unequal in terms of their teaching and research capacities and, despite the serious efforts by the post-1994 education reforms, the hierarchy between them has not been abolished. Elitists call for differentiation and rewards for excellence (defined in a way to preserve the excellence of the hitherto â€œexcellentâ€).

The onlyÂ alternative is functional differentiation. There has to be a situation where all are well-funded for what they are called or tasked to do. For students, there should never be closure in terms of a movement between them.

Furthermore, curriculum transformation and demographic change were a call that we heard quite clearly from student engagements at UCT, Rhodes, UKZN, Wits and Fort Hare during our charter process (2011-12). We also heard it clearly from most AfricanÂ and black academics. It has been the rallying call of #Rhodes Must Fall and of most, but not all student movements. Most have gone further than what the charter recommended, to argue that we have universities in Africa but no African universities. How this is handled internally will demand leadership and careful listening. Achieving itÂ whileÂ paying due respect to academic freedom in terms of ourÂ dispensation, will be hard. It is, after all, the right of each institution to decide on the character and the content of itsÂ post-apartheid role here, on the southernmost tip of Africa.

Ari Sitas is a sociology professor at the University of Cape Town and chair of the National Institute for the Humanities and Social Sciences board.