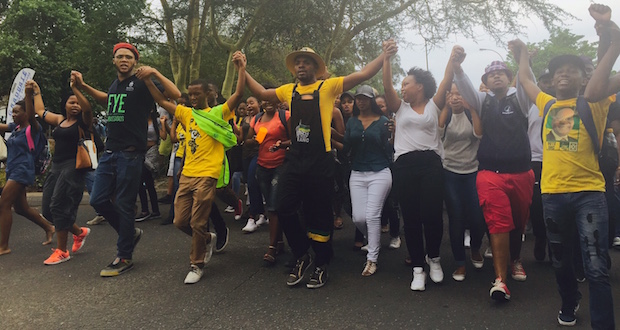 When youâ€™re one of the most well-known student leaders in the country, what other way is there to graduate than by having people ululate before your name is even called and serenade you with their best version of iYoh Solomon? AAISHA DADI PATEL reports.

After a rocky year, during which he was removed as SRC president, made some controversial remarks proclaiming his admiration for Adolf Hitler, and was one of the leaders of the historic #FeesMustFall protests, Mcebo Dlamini graduated on Tuesday with a Bachelor of Arts degree.

Breaking all conventions of normal stage time, Dlamini shook the hands of the academics on stage to the jubilation of the crowd. In a bittersweet moment, his nemesis vice-chancellor Adam Habib gave him a hearty embrace, and before he stepped off stage, so did current SRC president Nompendulo Mkatshwa.

On graduation day, it seems, all is forgiven.