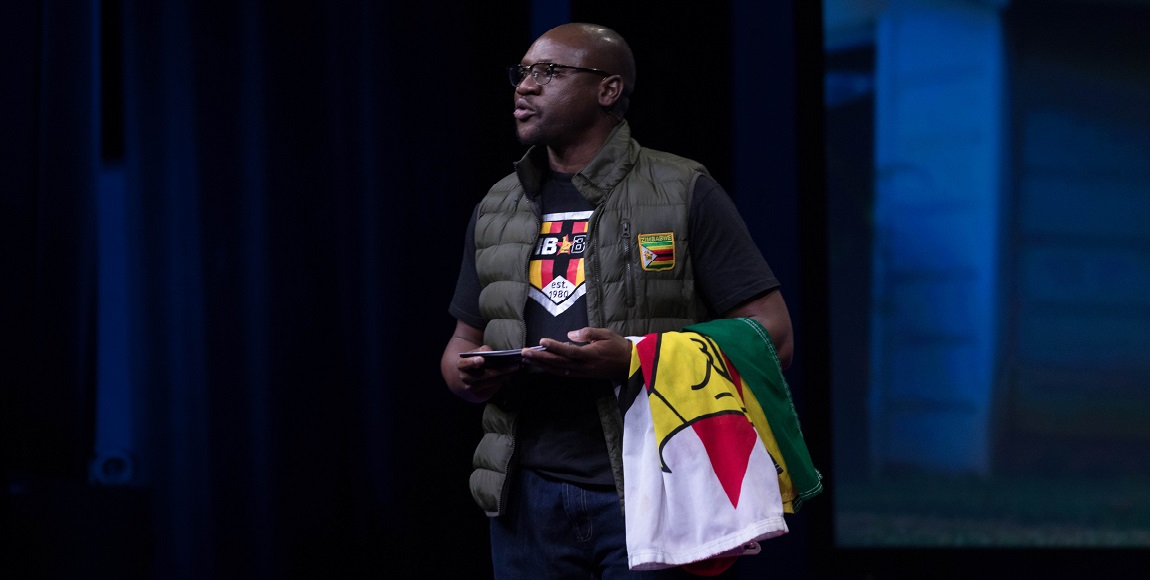 Evan Mawarire says not much has changed in the new Zimbabwe but he is hopeful for a better future for his country. The civil rights activist and pastor led the #ThisFlag movement in 2016 which encouraged Zimbabweans to take ownership of their country. Mawarire first gained social media attention after posting a video in April 2016 that expressed his frustration with Robert Mugabe’s Zimbabwe. In July 2016, the #ThisFlag campaign resulted in a mass movement of Zimbabweans shutting down the capital in a series of protests against the Mugabe regime. Mugabe was later ousted in November 2017. Mawarire was arrested and charged with attempting to overthrow the government – then later released. The Daily Vox spoke with him about #ThisFlag and the state and future of Zimbabwe.

What’s Zimbabwe like under Emmerson Mnangagwa, is it any different than it was like under Robert Mugabe?

It’s difficult to say there’s been a difference. But for the first time the ruling Zanu-PF is weak and is collapsing from the inside.There are freedoms we expected Emmerson Mnangagwa to institute immediately that he didn’t, which is scary because it feels like he is keeping these things to tighten his grip on power as Zimbabwe goes forward. He is trying to win international acceptance and legitimacy, and the confidence of the people there seems to be space to speak freely without being brutalised. There’s been possibilities for people to speak openly for the possibilities and solutions of a better Zimbabwe which never happened under Mugabe. Political discussion under Mugabe was illegal – however the laws that Mugabe used for that repression are very much intact. These laws are actually illegal laws because the Constitution gives us all those rights so they need to be repealed.

You spoke up against Mugabe with your #ThisFlag video-turned-campaign. Tell us a little about that.

I have to be honest in saying you could never have paid me enough money to speak up against Robert Mugabe. I had seen what happened to people who did that. Itâ€™s not something that I would have volunteered to do. But when it happened, it started as a protest video that grew and garnered interest with a lot of people that felt that this was one of the ways Robert Mugabe could be pushed for change.

That video titled This Flag gave birth to the #ThisFlag movement. This is because my conversation focussed on the flag of Zimbabwe as a story, as a promise, a dream and how that dream had been stolen and how that promise had been compromised. Every one of the colours on the flag has a meaning to it and we stood at a place where our politicians had violated what it stood for. All I said in that this not what our forefathers fought for. In the same video I said while it has becoming embarrassing to be Zimbabwean where everywhere we travel to people look at us with pity and shame, the onus to change the status quo lies squarely at our feet. This flag is begging every Zimbabwean to save it and restore that which our forefathers dreamed of. Without ordinary Zimbabweans, it’s not going to change. People responded to what they called a rallying call, for me it was a vent. It became a way that many Zimbabweans could stand up on their feet and say things they never thought they could say to a man they never thought would leave office.

What were the repercussions for this video turned rallying call?

I was arrested during the process, beaten, intimidated, my family was accosted. My wife who was pregnant at the time was threatened with rape. People actually came to the house and tried to bash the door down. My children – who were five and three years old at the time – actually had a visit from the central intelligence at school. If it wasn’t for the teachers who refused to let them out, I don’t know what kind of story we would be telling today – I was in prison at the time. I had almost 40 court appearances between July till November 29, 2016. My passport was taken from me. I haven’t seen my family who I left in safety in 13 months now, I’m hoping to reunite with them soon. Even now, the surveillance is very much alive. When I’m out and about I am followed and questioned. This has become a part of my life, these are the things I am determined not to let happen to anyone else.

That sounds incredible and surreal. How did it feel?

It’s like hearing all the stories about how brutal a lion can be and then one day coming face to face with that lion and having nothing else but your legs to run and your voice to shout for help. It’s like being powerless before something that could finish you in one swipe. Every day of my life during that time was survived by luck or grace. I had numerous abduction attempts that I survived simply because I left earlier or got a tip off. In prison, prison guards would tell me not to eat specific plates of food that had been poisoned. I would go to bed hungry but grateful to be alive. The stories I had heard and grew up with as an ordinary Zimbabwean about Zanu-PF became a reality. I understand what people who faced the system and fought it went through – some of them paid with it for their lives.

In Africa, some live under tyranny where liberation movements become dictatorships. What powers do African people have to change the regimes they live under and fight for the freedom that they had initially been promised?

In Africa it is incredibly tragic that the liberators become the oppressors. Part of the process that the regimes institute is the process of taking the voice of the people. The playbook is pretty much the same: there’s intimidation, closing democracy, refusal of people to criticise, speak up and participate in building of their country. The hope African people have goes to the simple aspect of raising your voice. In my experience, one of the things these governments hate is that one voice that is courageous and says even if you take my life I will not stop. That one voice can ignite a mass confidence and courage in people. The only way out is for citizens to refuse to be silenced and to claim their space as the ones who give the mandate to politicians. Politicians have convinced people they are the ones who have the power when it is the people that have the power. In our journey in the last two years as Zimbabwe, I’d like to say that we have found our voice with This Flag. Our catch phrase said: If we cannot cause the politician to change, then we must inspire the citizen to be bold. Bolder citizens are the answer to a change in Africa to frees ourselves from the oppression of those who were supposed to liberate us.

What are some of the challenges that still face Zimbabwe?

People that propped up Mugabe are still in power. The problem with that is that these people will not be very cooperative when it comes to turning Zimbabweans around in ways that matter. This is not only the economic side of things because their message is that Zimbabwe is open for business. But is Zimbabwe open for freedom? The challenges we face is that they won’t be willing to align the laws that have oppressed Zimbabweans for years with the constitution. I’m talking about laws like the public order and security act which prohibits people from gathering and speaking about politics without clearance from the government – and yet the constitution gives us these rights. There’s over 200 laws that have not been aligned. These laws still allow government to arrest people who speak up like I did in the last two years. Zimbabwe needs a democratic turnaround as well, a commitment which the new administration has not undertaken in the past 100 days.

Zimbabwe has to be – and this is both a dream and demand – a place where Zimbabweans are happy to be. Every Zimbabwean must long to be in Zimbabwe, because this is their home. An economic and political refugee.Zimbabwe has to be a place where there is a contestation of ideas, where we interrogate ideas and not people. I think that will open up a whole world of progress. When we allow people to openly discuss and challenge ideas, we grow. My dream Zimbabwe contributes to the global progress both in governance and development, Zimbabwe as an example of how a nation can develop itself using their own resources and people. A Zimbabwe that is not dependent on aid, but has the vision and capability to be a modern day democracy that contributes to a better world. I want to see Zimbabwe go from an extreme case of brutal dictatorship to an extreme case of a free and open society that encourages growth in every aspect.