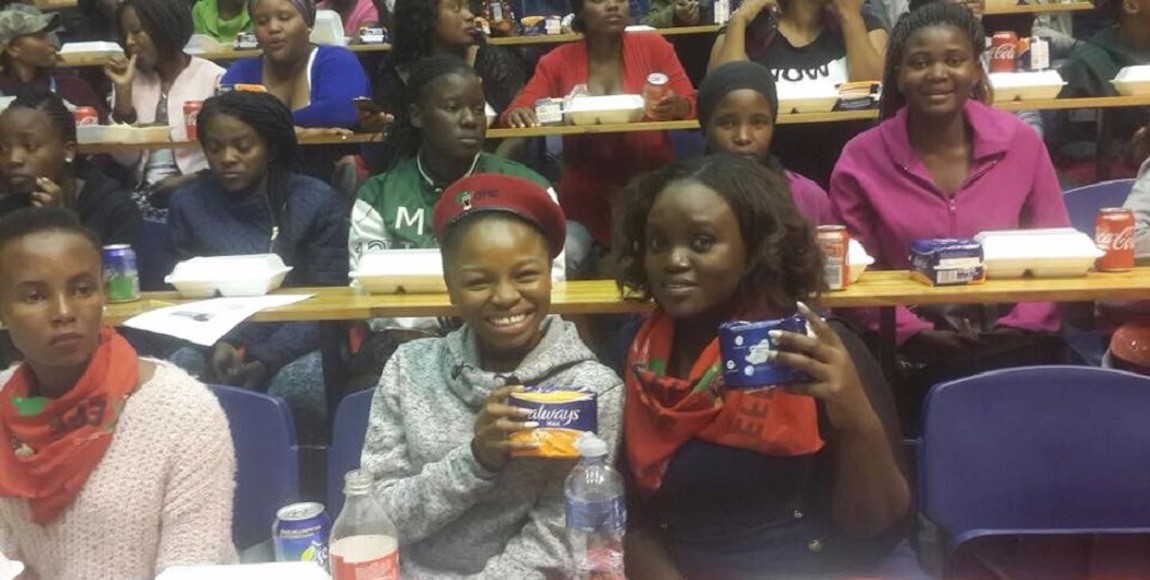 Naledi Chirwa, the national spokesperson of the Economic Freedom Fighters Student Command (EFFSC), recently told women and girls to take ownership of their vaginas – and it was revolutionary.

Chirwa was speaking to students at a women’s-only gathering at the anniversary of the Free Sanitary Towel Campaign at the University of Limpopo in April. She urged women to remember that their bodies are their own. This simple statement sent shockwaves throughout the country among women, but also among men, and sparked the hashtag #ThisIsMyVagina.

The Daily Vox spoke to Chirwa about #ThisIsMyVagina and why it is important for black women to own their bodies, especially in male-dominated spaces.

On that day we went in with the women and broke it down, practising black radical feminism in the spaces that we occupy, saying that males must not come was a very powerful position. The leadership of the EFF in the SRC said, ‘This is a gathering for women, and for black women in particular,’ and it was really successful. The message was basically about agency.

Black women in the country are the majority, which means they are the labour force in the country. And yet they are still subjected to ludicrous standards of surviving in the workplace: they get paid the least in the same industry as their male counterparts when they have the same qualifications and experience.

#ThisIsMyVagina is also about the rape debacle and about sex workers, who are criminalised and violated for their choice of trade – all of this while the economic and gender imbalances are not addressed. We are calling out all of these things because at the end of the day, it is black women who get the harsh end of the justice system, who get the harsh end of economic imbalance and inequality.

Rape culture has been normalised. So black women go through rapey tendencies and rapey incidences, and they don’t even pick it up sometimes. And then when they do, they can’t even report it because sometimes the authorities say that it’s not enough. Calling out and taking back ownership of our bodies is actually something that #ThisIsMyVagina speaks directly to, because violence against us is not legitimate until we are dead, and black women are being killed on a daily basis. Black trans women and queer women, our gender performance is criminalised because society believes our bodies are not ours. Whatever we decide to do with our bodies that doesn’t adhere to the standards society has set for us on how to perform gender and how to perform in relationships, when we subvert these gender conventions, we get violated. Even those women who don’t subvert, they still get violated because these bodies don’t belong to us. We have to take ownership of these bodies because we have to counter the violence that we face.

#ThisIsMyVagina is revolutionary because we were brought up to believe that our bodies don’t belong to us, we’ve been trained to function in society and please them. Even as a young girl, you are told to close your legs, you are told not to play at night. You are trained from a very young age that this body does not belong to you.

When we’re saying, “This is my vagina”, it’s an awakening moment.

Some people even came up to me to say that, “You are promoting promiscuity”, which actually goes back to the fact that black women’s bodies only exist to pleasure the sexual urges of men.

In the whole session I had not mentioned sex, but men feel that moment particularly goes back to them and includes them in the conversation. Even when we alienate them from the space, and say, “This space is not yours, this vagina is not yours, this is mine,” they still want to find a way to come and take ownership because they’re scared as well.

Their strength, their positionality in society and the economy, is based on us being at the bottom. Us coming up is a threat to them, it’s a threat to the status quo. It’s not comfortable because privilege is common sense to the privileged. When you are privileged, nothing outside your privilege makes sense. That is one thing black men need to actually confront, they must confront this fact.

Some male callers were rankled when Chirwa spoke about the issue on Power FM. One caller said Chirwa’s message invites promiscuity, while another said it could give licence to teen pregnancy.

The conversation must keep going. I’m definitely going to be engaging black women on this issue time and time again. Because even when I leave those spaces, black women are still going back to their boyfriends who abuse them, who rape them. It’s a conversation that must continue until society gets comfortable with this decision that we’ve made as black woman.

We’re not the first women to preach this message; Charlotte Maxeke was preaching on intersectionality decades ago. It’s something we’re going to continue and that’s going to manifest even in our lives as young people who are active in politics. All these spaces are male-dominated so we are responding to that.

Forever and ever amen. Until economic freedom is reached for black women as well.

Chirwa will be delivering this message to women in universities across the country. She will be speaking at the University of Venda, Wits, UJ and will also be travelling to the Eastern Cape.