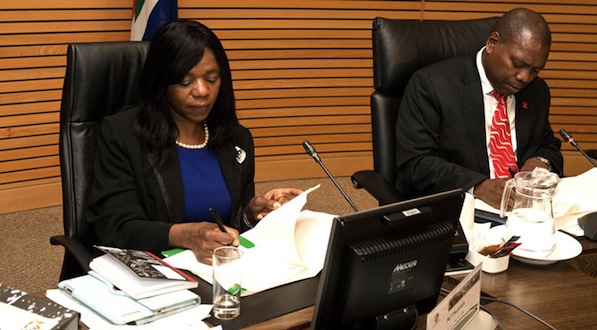 Public Protector Thuli Madonsela has been accused of being a CIA agent. Because apparently one needs to be deployed as a spy in order to do one’sÂ Â job. PONTSHO PILANE reflects.

On Saturday, Deputy Minister of Defence and Military Veterans Kebby Maphatsoe has accused Public Protector Thuli Madonsela of being an â€œenemy agentâ€ and a plant sent by the Central Intelligence Agency (CIA).

â€œThey are even using our institutions now â€¦ These chapter 9 institutions were created by the ANC but are now being used against us, and if you ask why, it is the Central Intelligence Agency,â€ Maphatsoe said.

Madonsela has been under fire from the African National Congress (ANC) and its allies since she began investigating President Jacob Zumaâ€™s Nkandla home and found that he had unduly benefited from government funds for alleged security upgrades, including a revamped cattle kraal and â€œfire poolâ€.

In her report, the Public Protector recommended that the president pay back the portion of the upgrades that are not related to security.

The Daily Vox recently showcasedÂ Madonselaâ€™s five biggest casesÂ since her tenure began in 2009. Madonsela has done an excellent job as Public Protector â€“ the two previous Public Protectors were virtually unknown to the public and her predecessor, Lawrence Mushwana, was widely perceived as being lenient towards corrupt or unethical state officials. Mushwana left the post under a cloud of controversy but not without a R7-million golden handshake.

So when Maphatsoe accused her of being an agent, it alerted us to a problem the ruling party may have with anyone who â€œtakes on the ANCâ€, even if it is indirectly.

Just recently,Â SundayÂ Times reporter Gareth van Onselen was accused of being sent by â€œhis mastersâ€ to expose that Pallo Jordan did not have a doctorate, as he had claimed for many years.

In aÂ Business Day column, van Onselen addressed the rampant conspiracy mentality that exists in South Africa. Although in his case he was being accused of being an agent of the ANC, the allegations are fundamentally similar. It seems that one cannot be critical of a political superior in South Africa without being accused of having been sent to do the bidding of oneâ€™s â€˜handlersâ€™.

Similarly, last year newspaper proprietor Iqbal SurvÃ©, when questioned by a Mail & Guardian reporter about the media independence of his consortium, a large stake of which is controlled by the South African government, implied that the weekly newspaperÂ may be â€œcontrolled by the CIAâ€ and â€œfunded by Washington.â€

But labelling people â€œagentsâ€ is nothing new in South Africa. Steve Biko, the founder of the Black Consciousness Movement, was at one time labelled a CIA agent by none other than Zumaâ€™s spokesperson Mac Maharaj.

Author Paul Trewhela this week pointed out that the familiarity of the rhetoric now being used against Madonsela. â€œThe phrase “enemy agent” was used indiscriminately in exile, and often carried a death sentence,â€ writes Trewhela, who argues that this charge is â€œsanctioned from the topâ€.

The idea that â€œhigher powersâ€ must be controlling Madonsela because she â€œtakes on the Presidentâ€ stems, I believe, from the idea that the ANC cannot be challenged because institutions such as the Public Protector only exist due to them.

In aÂ recent column, Mail & Guardian associate editor Verashni Pillay said: â€œThe ruling party may have been a major player in the creation of our new Constitution after we became a democracy, but it does not own the document or the institutions it created.â€

Is it so hard to believe that Madonsela was simply doing her job when she investigated Nkandla? Yet some choose instead to believe that there must be some underlying sinister motivation for Madonsela to follow the evidence presented to her. Is this because we are so inured to public servants placing their personal objectives above those of the office they occupy?

Questioning the actions of government does not necessarily mean that one is against government. And yet in spite of the overwhelming evidence showing wrongdoing in the renovations made at Nkandla, some, like Maphatsoe, seem to think that only an imperialist agent, sent to discredit South Africaâ€™s liberation movement, could ever find reason to criticise it.