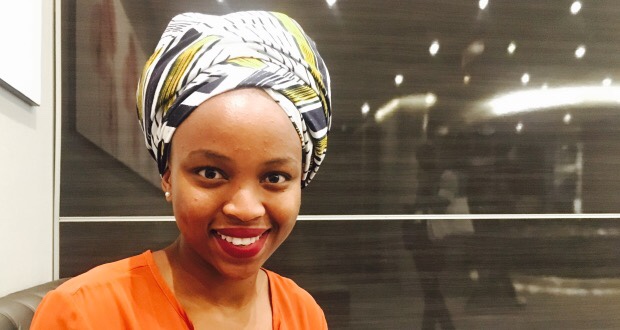 18-year-old rising spoken word artist Thuto Lesedi is blowing people away with her powerful poetry and stage presence, writing and speaking about being a young South African at point where South Africa is trying to find herself and deal with these processes called “transformation” and “decolonisation”. Â After a goosebump-inducing performance at the Menell Media Exchange 2016, we caught up with her to talk about who exactly she is.

"There's a peculiar kind of sadness that comes with being South African" @_ThutoVEN ?? | #dukemmx16 #poetry pic.twitter.com/vy5EuyzPjC

I’m just a young black girl from the North West. I’m 18 years old and a first year at Wits University. I’m from a small town in Mafikeng, where I was born and bred, and I only came to Joburg this year. It’s my first time here, this year.

I’m studying civil engineering, but my passions are poetry, acting, writing, singing, and art. My dream is just to be able to spread messages where we talk about important issues and we bring those issues to the table from a young person’s perspective. I’ve been weighing my options up and thinking of changing to a less technical course, because I’m not really that technical. As much as you can pass those things, sometimes you don’t really want to follow that dream. So I might be changing next year – but only God knows.

I grew up in the arts. I was a theatre student from grade six until matric. That was basically me, and who I really am. But being raised in my race, my culture – most of our parents still are hesitant and apprehensive about us going straight from matric into the arts, which they worry about not being a “safe” space in terms of the long-term security and opportunities. So I was hoping that as soon as I am done with my degree, I can get into that field. In my degree, there is a critical thinking course which we have to do and I really love it because it’s so different from the seriousness and way of thinking in my other courses. It was my favourite, honestly. But the way things are going, I’ll hopefully be changing next year – I need to let this out, I really can’t keep it in. I don’t know if I’ll change to an arts degree necessarily, but hopefully definitely to a degree that gives me more time to be an artist.

I am lucky to have a family that is so supportive. It isn’t always easy for young people to get taken seriously. People usually say, “no you’re still young, you can’t say a lot,” and in my opinion, that’s the worst thing you could ever tell a young person. As young as I may be, tomorrow, I’m gonna be the one who’s old. As crude and as raw as the youth are, let them be. There’s no formula or single way to say how things should be done.

Transformation, decolonisation – these things need to happen! I think that a lot still has to be done. And art has a key role in these processes happening. Crude, raw, unapologetic, uncut. No one tells poets or artists, “no you can’t write this” or “no, not this way.” As artists, we have that obligation, or rather privilege to say what we want to say and say it the way that it actually is, not sugarcoat anything. And to me, that’s the best thing about being an artist.