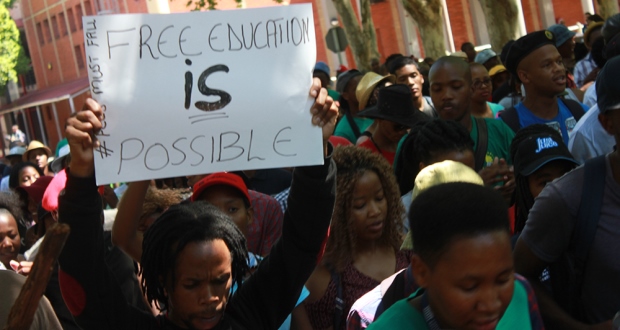 While political parties do all they can to entice the youth vote, some young members of decolonial movements at universities (or “fallists” as they’ve come to be known) told The Daily Vox whether they’ve been convinced to visit their polling stations on 3 August. Mbali Matandela, 23, freelance writer, Johannesburg
My initial attitude toward these elections was that alternative forms of democracy and alternate methods are more powerful than the electoral system we currently have in SA. So my stance on the local government election was that I wasn’t going to vote unless we had free education and unless our country developed a very particular stance on land claims for South Africans. My stance was, “no free education, no land: no vote”.

But right now I think there’s something very interesting happening in our country and it would be naive to not follow it and look closely at how the politics of the country are changing. I think these local government elections are going to bring about a very important political change. The ANC, the liberation party, is losing power and we’re seeing the EFF emerging as a new power for poor black people, but also the youth who don’t have such loyalties to the ANC. The ones that still do, their loyalty is based on their parents and their background. So I think we’re living in a very interesting time and it would be interesting to participate in that political change. This is only something I’ve come to recently. My vote for the EFF would be a strategic vote for political change, not a full endorsement of their politics.

As a gender activist, I often feel, when it comes to local governance, gender rights and access to certain basic services for women is left out. I think local governance often does not address this and it’s always addressed at a high level through women’s political participation, women in parliament looking at quotas etc but it’s also a grassroots level issue. And the reason why I find it hard to feel affiliated to any particular party is because they don’t address this adequately. Alexandria Hotz, 23, secrecy organiser at Right2Know, Cape Town
I’m torn in two because in terms of my politics, I don’t think voting will do shit. I’ve also said, ‘No free education, no vote’. But being in the Western Cape in particular, when you don’t vote you’re giving a proportion to the DA which is just something I’ve been grappling with. But if I were to truly honestly vote, I’d be voting for a political party that wouldn’t get many votes in the Western Cape anyway. I’m probably not going to vote.

If I were going to vote I think it would be more on principle than on strategy because if I were voting strategically the only political party I could vote for that would be a contender here against the DA, would be the ANC. And I’d never vote for the ANC.

The party I currently find interesting is the EFF because I would like to see what would happen when they actually have control over a municipality, city or province nationally. The policies they’re talking about are issues around land, nationalisation, a living wage not a minimum wage of R12, 500 for any kind of worker, they support Palestine and speak out against patriarchy which is all interesting and great on paper and as rhetoric, but it would be good to see it implemented. And at the same time, they’ve committed to the Freedom Charter, which I cannot reconcile with. So those are some of the contradictions already. Like if you say you’re pro-black, then I don’t know how the Freedom Charter falls into that. Mlingani Matiwane, 20, economics and psychology student, Cape Town
I will not be voting these coming elections. It would be very confusing being a decolonial person trying to do away with representative democracy while simultaneously participating in that process.

The amount of influence, and the domain of real structural change, rests on the national level which is not anywhere near where the decolonial project is at this point. So if you do believe in wanting to make real serious structural change, then your only bet, at this point, is either to influence the parties that currently exist, and inculcate decoloniality into their rhetoric through voting and partisan participation. I was sympathetic to this reasoning up until I myself started to participate in partisan politics, with the EFF, for a few months. That’s when I saw that this thing is almost entirely a game of loyalty to the party and unquestioning loyalty at that. The scope and domain of realistic debate is very limited. These parties come with founding documents that are almost immutable. So there’s very little you can do in terms of inculcating a position that was not already agreed upon when the party was creating itself. So for those reasons I again got disillusioned with party politics.

Representative democracy assumes that a citizen can defer the responsibility of politics to someone else. That we vote for you and then we can leave the political sphere because we trust you and think you’ll represent what I represent etc. The nature and being of my positionality is such that that is not a thing that I can do unless there’s a party that’s straight up for queer, black trans people. If that’s not a thing that’s going to happen then I can’t, and I won’t, defer my political responsibilities to anyone else. Hasan Varachia, 22, Engineering student, Potchefstroom
This year I will be working for the IEC but don’t find that any political party stands for what I believe in so I will not be voting. I feel that all political parties currently serve themselves and their ranks, with very little interest in the people.

I think there’s perhaps a chance of independent candidates of making a difference within the wards. Other than that I hope to see the EFF maybe take a few wards so that they’re given the opportunity to take a stance and be tested. I think with DA, which is just a colonised party in democratic uniform, I would expect nothing of them. The ANC who has had power for too long, would really not be expected to contribute much for the people.

I’d like to see from whoever claims our wards that service delivery is rendered to the people in the ward, to see that local health and standards of education are maintained up to standard. It would be very important for the ward councillor to embody or be a true representation of the people’s voices. I’m very pessimistic of those and believe be need a fundamental change in political structure, but obviously I would like to at least see a little change in the interim. Simon Rakei, 21, accounting student, Cape Town
I am not going to be voting. I think the basic rationale for this is that the parties that exist right now are not representative of my interest as a young person or what would want to be in a political party.

On a more nuanced level is lack of faith in the electoral system. I don’t think voting is enough political participation like it happens once every few years so I don’t think that’s enough participation in a so-called functional democracy. Even when you do vote for them, they’re not going to necessarily represent your interests to the extent that it’s effective in representing who you are as an individual. Voting doesn’t fulfill those tenets of democracy in the sense that it doesn’t have enough participation to reflect the people who vote and what their individual aspirations are.

I would prefer something that gravitates towards communal participation so where decisions aren’t taken by one ward councillor or one municipally elected councillor. I would want those decisions that people elected the municipal councillor to make, to be made by the communities themselves. Those decisions need to be taken in such a way those communities or municipalities come together and make those decisions. So basically just drop the top-down approach to essentially democratise the whole system.

Even if our current electoral system worked as perfectly as is possible, there are still implicit flaws in the sense that it would never be properly democratic in the truest sense of the word. Featured image by Ra’eesa Pather. Images of vox subjects have been supplied by the subjects. Image of Mlingane Matiwane by Wandile Kasibe.