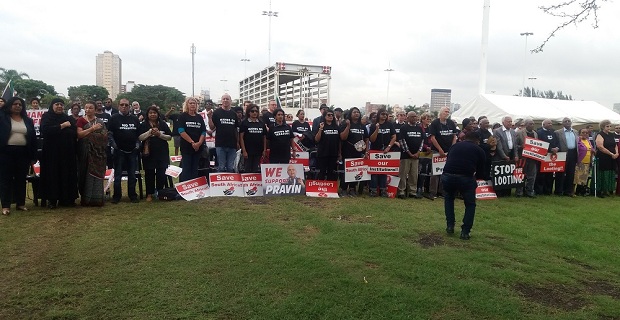 On Wednesday, hundreds of people assembled at the Gugu Dlamini Park in Durban, in celebration of the National Prosecuting Authorityâ€™s (NPAâ€™s) withdrawal of charges against Oupa Magashula, Ivan Pillay, and Finance Minister Pravin Gordhan. The Daily Vox asked some people why this cause was so important to them. Naison Kambarami, 46, activist, Durban
[dropcap]”[/dropcap]Our duty is to advocate for justice and anti-corruption and we have seen what is currently going on in the Treasury. We are aware that the government has a say in the Treasury but the Treasury must not be manipulated. Charges against Minister Pravin Gordhan werenâ€™t fair and I think he was targeted because of his capability to do his duty and do it well.“ Salim Abdool Karim, 56, director, Durban
[dropcap]”[/dropcap]Minister Gordhan was one of the stalwarts that was providing healthcare at the King Edward Hospital when I was still a medical student. Our efforts are there to support him in his fight against corruption. As doctors, we are concerned about the health of our nation and everything else including the state of our country so we stand with everybody to support Pravin. The attack on Gordhan has led to plummeting of the rand and we are still fighting against the epidemic of HIV but I canâ€™t even afford to buy the simple necessities for my research. Also, I am very pleased that the president has finally decided to withdraw his decision against the state of the capture report because we have to see and understand why the country went down.“ David McQuoid-Mason, professor, Durban
[dropcap]”[/dropcap]I am very worried. We are a rich country but money is being wasted, the government is giving it to their friends, who are taking it out of the country and the poor people are not getting anything. A malicious prosecution was conducted because there was no reasonable and probable cause to charge the minister. Minister Gordhan can actually sue for damages and if he decides to, they should pay from their own pocket, not using the tax payersâ€™ money. We need the finance minister to stand up and stop the corruption.“ Rags Rampasard, 52, activist, Durban
[dropcap]”[/dropcap]I have fought for the freedom of this country and all I can see right now is our economy sinking. People of integrity are being attacked and because I have a struggle in me, I will continue to fight against corruption and leave a better future for my children. We have one of the best constitutions in the world and I am very positive that we will see change, it is just a few people that are corrupt that are bringing it down. We are fighting but the difference is that we are now fighting a different battle that most people do not understand, especially the rich.“ Yousuf Vawda, 64, professor, Durban
[dropcap]”[/dropcap]This gathering was for a number of reasons however the main reason was the charges against the Finance Minister, Mr Magashula and Mr Pillay. They have been withdrawn, itâ€™s a victory in a sense that people who spoke out about the injustice of this particular act by the NPA are vindicated. The second purpose of being here is that today could be Pravin Gordhan who is prosecuted, but tomorrow it could be you or me. There needs to be a good reason to prosecute people because we found that there was no case. We are saying that there is something wrong with the NPA and we need to ensure that whoever is in charge of the NPA is independent and not acting on instructions by Luthuli House or anyone else.“