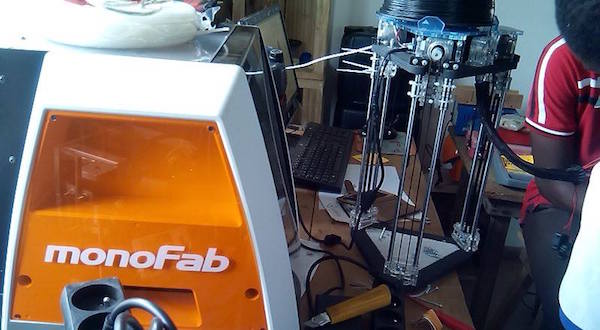 A group of innovators from Lome, Togo, will enter the history books as the inventors of the worldâ€™s first 3D printer made out of e-waste.

3D printers are an innovation that has designers the world over excited about the possibility for leapfrogging the need for complex machinery or a large work force in order to produce or manufacture goods. All you need to do is download a design from the internet and the 3D printer will “print” the three dimensional object for you – whether it’s a wheelchair, prosthetic arm or even an entire house.

Typically, 3D printers are large and mainly used by industrial companies, but with advancements in technology, they have become more compact and can now even be used in the home. The X-factor for 3D printers is that you can make objects of your choice right in your home.

The WoeLab team, led by Audrey Rhodes, reused dumped electronic material to make the 3D printer, at a cost of less than $100, and they are currently making more. Not only is this innovative, but this makes their printers environmentally friendly as well.

Although the use of 3D printers in an African context has not been well explored, the use of re-purposed electronic materials at least helps alleviate Africa’s increasing e-waste management problem.

With a population of almost 7.5 million, Togo has a low internet penetration rate with only 43.85% internet users. The enthusiasm for 3D printers is relatively low in Africa at the moment, but Woelabâ€™s low-cost and eco-friendly approach could change that.

â€œWe missed the industrial revolution train – now thereâ€™s the train of the new revolution of 3D printing all over the world. We wonâ€™t miss this train,â€ said Rhodes.

Watch the video here: (Skip to 7:29 for the segment on Woelab)