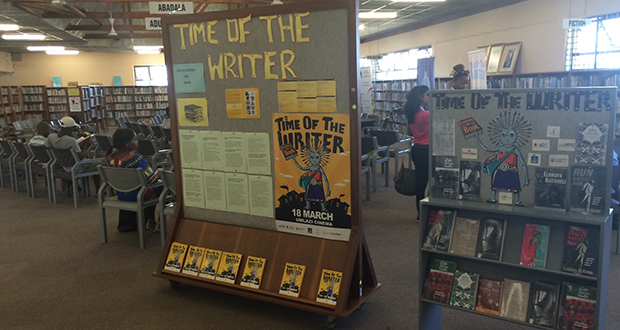 The Time of the Writer festival is upon us, and The Daily Vox team will be following it all over Kwazulu Natal, as authors and artists work on â€œDecolonising the bookâ€. You can follow the happenings right here. Click here for what happened on day 1,Â hereÂ for day 2â€™s roundup, and here if you want to catch up on day 3. For all the latest on day 4, see below! Mandla Ndlovu and Christa Biyela in conversation with Eric Ngcobo about radio drama and tuning in #TOW2016 pic.twitter.com/wCc43IsDCl

Talking radio drama and tuning in – and the conversation is in full, fluent Zulu.

His debut was described by Lauren Beukes as â€œa hallucinogenic post-apocalyptic carnival rideâ€. Heâ€™s writing 13 other novels at the moment, and heâ€™s determined to shatter stereotypes. Dana da Silva caught up with him – you can read his interview here.

The second last evening of the festival is underway, with the Young Musos kicking off the ‘Notes on Music’ segment

Notes on music with Young Mbazos. They were given a task to compose a song about sex and HIV. #TOW2016 pic.twitter.com/g5J28bGg96