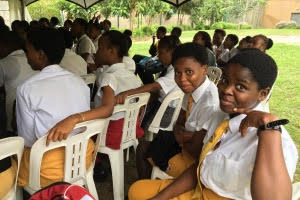 The Time of the Writer Festival is coming to a close today, and The Daily Vox team will be covering it all as conversations around decolonising the book are brought full circle. Lebo Mashile is now separating the crowd into groups to discuss questions under the theme. #TOW2016 pic.twitter.com/gNfS8hhuFw

After the crowd split into groups to discuss concepts more in-depth, there are robust report-backs.

Some groups say that the concept of intersectionality is a difficult one to narrow down.

And Milisuthando Bongela says girls have many different ways of describing themselves.

Groups 2’s Bongela says that as girls we have many different ways of describing ourselves. #TOW2016 pic.twitter.com/Qggn6veiwA

A man in another group says that a black man with a Masters degree is afforded the same respect as a white boy in grade 8.

A group 3 participant says a black man with a masters is afforded the same respect as a white kid in gr8. #TOW2016 pic.twitter.com/Afr2lMS3I8

11:30 Lebo Mashile defines intersectionality as the concept that all struggles are linked to one another. PanellistÂ Milisuthando Bongela says that intersectionality also lies in the realm of language, andÂ is a powerful way of stripping things of power. The conversations are robust, and the panellists have plenty to say around how constructed terms cannot be used to define them.

A primary for me is to un-marry these terms [intersectionality] from academia – @TheKingsTings #TOW2016 pic.twitter.com/VPhZH1083z

When I talk about who I am, black, female, queer, these are created terms that do not define me – @TheKingsTings #TOW2016

11:15 We’re all set to kick off the panel on The Book and Intersectionality atÂ Qashana Khuzwayo Library this morning, set to be moderated by Lebo Mashile.

10:00 First up this morning, the Alliance Francaise has a children’s programme on!

Featuring a host of women including the legendary Mam’ Gcina Mhlope, the Children’s Storytelling Matinee is enthralling young readers with tales from African folklore.

Hlobisile Mkhize telling the children a story about why crabs don’t have heads #TOW2016pic.twitter.com/EtvfDroS6S

And there is no one who can doubt the incredible storytelling abilities of Mam’ Gcina.