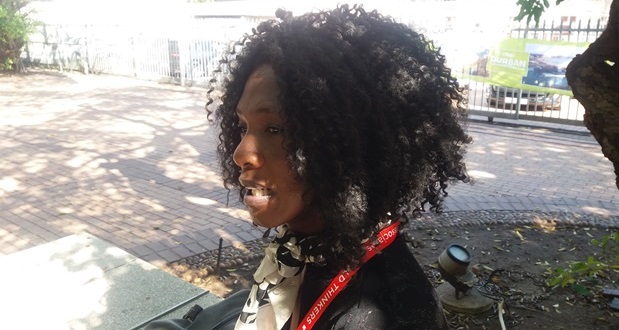 AYANDA D, a transgendered sex worker in her 30s from Cape Town, has been a sex worker for 15-20 years. Sheâ€™s at the International AIDS Conference advocating for the decriminalisation of sex work. She told the Daily Vox about her challenges, including the triple threat of stigma that she faces.

I am transgendered. Thatâ€™s my sexual identification and I have been in the sex work industry for 15-20 years. Iâ€™m at the conference to show support for transgendered people and sex workers.

As an individual, it has been a challenge; as much as I am an advocate and having a big mouth, trying to cry and fight for my rights. But there are those voices who are silent, who canâ€™t fight for themselves. So I digest those voices and feel the pain that they feel – because it becomes a pain for me to see my own part of me, my blood of me, sisters of me, going through the pain and oppression that I go through. Because not my motherâ€™s child can feel what I go through, but another trans person, who I donâ€™t know, can feel – because we are of the same, we are one of a kind.

Itâ€™s like I always say, itâ€™s much better when somebody actually hurts you, maybe stabs you and then thereâ€™s a wound and blood comes out; that wound can be patched. But a wound that is from the heart inside – a heart is a very delicate organ that you canâ€™t sew. And that emotional abuse – itâ€™s the abuse that counts most.

As sex workers, we are faced by brutality from the cops; they confiscate our condoms. What message are they giving us? That we should carry on with our business without protection? We are crying for decriminalisation of sex work. They donâ€™t want to give us decriminalisation of sex work, so that SAPS wonâ€™t come and take our condoms away, whilst the department of health is giving it to us, so that is our main problem.

Yesterday, we were having a march, a red umbrella march where we amalgamate all sex work organisations in Africa. From us, from our regional head office, to SWEAT [Sex Workers Education & Advocacy Task Force] where I sit on the board, to Sisonke, a movement of sex workers in Cape Town. We all amalgamate, we have one cry and itâ€™s a cry that is recognised internationally by international sex workers. We want decriminalisation of sex work.

As transgender people and the SWEAT organisation, we go as far as parliament. We are recognised, we sit on the board of SANAC (South African National AIDS Council) with local dignitaries, parliamentarians, the department of social development, the department of health. They know, we are a known organisation [that is] calling for the decriminalisation of sex work; thatâ€™s who we are.

Transgender people need to stand up for who they are. I believe in a judge that is unseen, and from him you canâ€™t hide anything. Thatâ€™s why Iâ€™m quite explicit about my life.