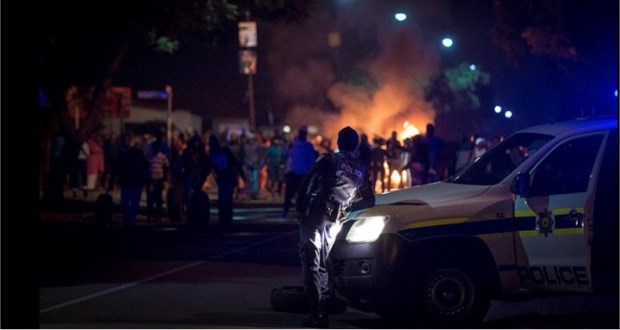 We’ve already got 11 official languages but government speak is a whole other language, yo. On Tuesday, the security cluster released a statement on the #TshwaneUnrest (and other places too, apparently). The Daily Vox Team breaks what Minister Mapisa-Nqakula REALLY meant.

Translation: We know shitâ€™s going down.

â€œGovernment is closely monitoring the situation, just a while ago a delegation comprising Ministers David Mahlobo, Nosiviwe Mapisa-Nqakula and Gauteng Premier David Makhura as well as senior government officials visited Atteridgeville, Hammanskraal and Mamelodi. The destruction of property and chaos we have witnessed is highly unacceptable and should not be allowed to continue.â€

Translation: Since the SABC wouldnâ€™t show us what was going down, we visited these places ourselves for some photo opportunities.

The leadership that is present at the meeting. #TshwaneUnrest pic.twitter.com/8UQvHg2roQ

â€œGovernment, calls for calm and for people to continue with their normal businesses as government is responding adequately to the situation. We also call on people to be vigilant and avoid any violence related activities.â€

Translation: Fam, we got this. You can stop burning stuff. Also, stay out of the way of stuff thatâ€™s already on fire.

â€œWe also call on all people not to allow themselves to be misled by a lot of misinformation circulating on social media and other platforms which are intended to cause confusion and unnecessary panic.â€

Translation: You do know those Whatsapp messages saying warning of a civil war are old news, guys.

â€œWe will make the official announcement as and when is necessary.â€

Translation: Our spin machine is hard at work.

“Government has condemned and continues to condemn in the strongest possible terms the violence and the destruction of property which occurred in these areas. Violence, damage to property and infrastructure and infringing on othersâ€™ rights and free movement including incitement of others to commit this type of offences will not be tolerated by law enforcement agencies. Those who make themselves guilty of such acts will face the full might of the law.”

Translation: IT IS NOT COOL TO BURN STUFF!

“In this regard, government has increased visible policing of members of the South African Police Service (SAPS) and monitoring of hotspots will continue. The law enforcement agencies are currently hard at work to ensure that calm returns to all areas. Criminal matters arising out of these incidents are being prioritised, among others DPCI investigating and court cases will be prioritised so that matters can be dealt with speedily. Approximately about 20 cases are under investigation and so far some arrests have been made and some are in court.”

Translation: See, weâ€™ve got this. Not sure whatâ€™s gotten them so riled up thoâ€™.

â€œThe Justice, Crime Prevention and Security Cluster is working in a coordinated manner to ensure that all relevant state institutions respond adequately to the situation.â€

Translation: Weâ€™re having meetings about this stuff.

â€œGovernment reiterates that violence is not the answer. Our democracy offers many avenues for people or communities to address any grievances. We therefore call on communities to raise grievances within the confines of the law. Those who ultimately decide to exercise their right to protest are advised to do so in a peaceful and orderly manner.â€

â€œThe Constitution guarantees the right to peaceful and unarmed assembly or demonstrations. It also allows for peaceful picketing and the presentation of petitions.â€

Translation: And just be nice when youâ€™re protesting.

â€œGovernment, however has a responsibility to protect property and to protect those who do not wish to participate in protests or strikes against intimidation and/or threats of violence.â€

Translation: Listen here, donâ€™t make us go all Marikana on you guys.

â€œCommunities and individuals who are unhappy can express their dissatisfaction through a number of constructive platforms. These include public participation forums, Izimbizo, public hearings and other democratic processes.â€

Translation: There were meetings. You didnâ€™t get the invitation?

â€œThose who ultimately decide to exercise their right to protest are advised to do so in a non-violent manner.â€

Translation: Sorry youâ€™re not happy with the nomination of Thoko Didiza, but who you gonna call now?

â€œWe have noted the criminal elements who have taken advantage of the situation by disrupting the socio-economic activities which has led to the closure of certain businesses. No public space will be turned into a no-go area. Government reiterates that any form of intimidation or looting by protestors will not be tolerated.â€

Translation: We wonâ€™t actually warn against targeting foreign nationals, but listen, leave the spaza shops out of this.

â€œGovernment would like to thank the law enforcement agencies for their quick reaction to contain the situation and continued assistance in stabilising the affected areas. We would also like to thank all persons in these affected areas who continue to conduct themselves in a responsible and law-abiding manner.â€

Translation: Shoutout to the homies at the SAPS! Also, all of you who are not burning the place to the ground.

â€œThe South African government has and will continue to ensure that all people within our borders are and feel safe.â€