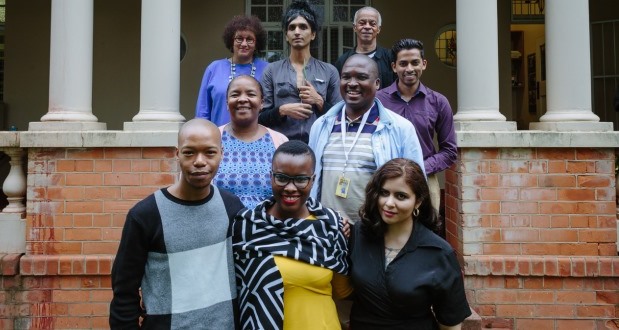 Books and intellectual conversations all day long, right? Wrong. Writers are like you and me. They are very human who donâ€™t always talk smart and if thereâ€™s anything to it, they donâ€™t always carry big words everywhere they go. MBALI ZWANE reports on her time spent covering the 2016 Time of the Writer festival.

The humidity might have left my hair standing on end but the company was anything but scruffy. Indeed, it was a real privilege to find myself in the company of a mixed bunch of writers and storytellers during the Time of the Writer festival in the salty, and sultry, city of Debben.

We spent a week together, travelling from the hotel to the various venues around the city. KwaMashu, Cato Manor, Umlazi, Inanda, Kwadakuza. On most days I sat in silence (because, introvert) and listened in on the wicked and whacked conversations around me.

One conversation that struck a chord with me occurred when a tour guide introduced us to the school hall where Nelson Mandela cast his first vote in 1994. Immediately bewitched but immediately drawn into that complex place in which South Africa finds itself today: acknowledging struggle heroes and questioning historical decisions all at the same time. In a moment, the conversation changes, and the troops talk old adverts (particularly the Joshua Doore and Cremora adverts) before shifting to Yizo Yizo, Backstage and kwaito music.

Travelling in a minibus with the writers was a lot like high school – the cool and popular sitting at the back, the “awkward and weird” in isolation and the I-know-my-shit-but-calm circle and the like mingling with each other. Of course, some found that they clicked better with a certain circle so it was almost always grouped that way; much like high school – find your niche and stick to it. Thando Mgqolozana, dubbed commander-in-chief of decolonising the book had a great responsibility on his shoulders. All eyes were on him as heâ€™s changing the rules of the school, and he handled it like a boss.

Mgqolozana, concerned by my silence, frequently asked if Iâ€™m okay. I laughed at his jokes in silence and four days into the festival, he was convinced I dislike him. How could I possibly dislike a writer working towards greatness? â€œWe need more Thandosâ€, said everyone who was given the platform on the opening night of the festival. Nakhane TourÃ© and Panashe Chigumadzi are the new cool kids on the block. Chigumadzi seems to fit right in while TourÃ© gingerly navigated his way around the caucus. I ended up talking more to Nakhane in between our trips and photo shoots. â€œDo you chill with writers often? Is it always this cliquey?â€ he asked me on the second day of the festival.

We had a whole conversation about grappling with the challenge. On the last day of the festival TourÃ© told me: â€œI was wrong. I wonder though, maybe I was being sensitive. Iâ€™ve come to have the funniest conversations with some authors. Cliques of course exist, but maybe theyâ€™re not as sinister as I thought they were. Iâ€™m happy that my preconceived ideas were smashed.â€

Christa Biyela and Mandla Ndlovu were the old-school-cool who reminded me so much of my maternal family. I connected with Christa on a mom-to-daughter level, maybe because her son is the same age as I am. She also resembles the strength of my late mother. I then learn that home is wherever you find comfort, even if itâ€™s temporary.

uBab’ Mandla (as I referred to him over the week because you canâ€™t call someone more than ten years older than you by their first name), was very interested in my work as a journalist, so our conversations would mostly start with, “Howâ€™s it going? I canâ€™t imagine what youâ€™re going through” then end with, “I cannot wait to read your work and I hope youâ€™ll publish a book soon.”

As expected, writing often came up in conversations with writers. Like uBab’ Mandla, uBab’ Nakanjani Sibiya is humorous and often asked me when Iâ€™ll write and publish my book, before telling me his story of how he published his first book while in high school. “Youâ€™ve got the time now when youâ€™re young. When youâ€™re old and have responsibilities, itâ€™s hard to find the time to do the things you love always,” he said.

Anthropologist-in-training Mishka Hoosen and I chuckled at Sibiyaâ€™s silliness and waited for him to leave before talking about his humble but funny character.Â Hoosen, wife of my colleague and nonchalant badass talked to me about sex and blackness.

We agreed about the state of our shitty media.

Another writer whose personality intrigued no end, had to be 40-year-old Nikhil Singh who looks no older than 25. I stayed close to him because I wanted to know the secret of not aging. I learnt that he was vegan and hardly touches dairy products. He also taught me a thing or two about life and society. Singh dropped out of high school and refused to go to university.

If I had some misunderstandings about diversity, #TOW2016 completely fixed that.

And, oh, If youâ€™re ever wondering about the future of black literary spaces in South Africa, rest assured itâ€™s in good hands.

Mido Macia and how SA became desensitised to police brutality