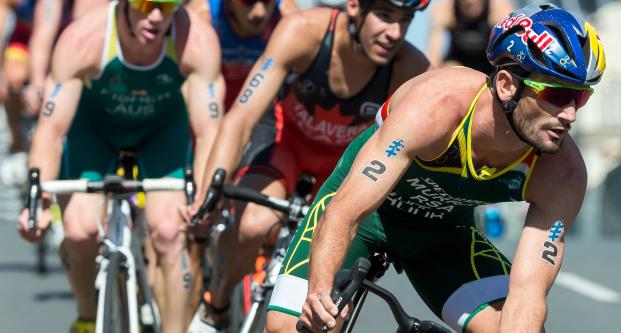 With less than a month to go before the Rio Olympics begin, many athletes are furiously getting their last bit of training in for before heading to Brazil. Triathlete, RICHARD MURRAY, is one of them. He chatted to Alicia Pillay-Wagiet about his plans.

He has been around the world for the last few months taking part in races and getting his final preparations done. Murray has been training in France in the Pyrenees Mountains, east of Andorra where the altitude is 1, 650 metres. He will be in Hamburg for his last event ahead of Rio in the middle of July. He is then off to Banyoles in Spain for sea-level acclimatisation before leaving for Rio on the 13th of August, five days before his event.Â Murray only managed a 17th place finish at the 2012 Olympics, and knows he needs a massive improvement on that result.

However, things didnâ€™t go very well for him in the lead-up to the games as he broke his hand and collarbone at the Gold Coast World Triathlon Series (WTS) in Australia in April. But he outdid himself when he won his first ever ITU Duathlon World title in Spain during his comeback from injury. He has since fully recovered and raring to go.

â€œTraining has gone well post-collarbone break, I have seen big steps in my progression. I hope to have enough time to get to where I want to be on the 18th of August,â€ he said.

His training started earlier this year where he bagged a win at the new Plymouth World Cup in New Zealand and a second place finish in Abu Dhabi at the World Triathlon Series (WTS) before his injuries.

Some say some athletes go to the games just to be part of it. This isnâ€™t how Murray sees it. He says he isnâ€™t going just to make up the numbers, but believes that he will be bringing home a medal.Â â€œI want a medal. 2012 was about the experience for a 23-year-old kid. I am now 27 and have plenty medals against the best in the world. I want it more than ever.â€

London Olympics gold medallist Alistair Brownlee is showing good form ahead of the event, winning the WTS event in Stockholm last month. The Brit, along his brother Jonathan who won bronze in 2012, will be favourites in Rio.
Murray knows the competition wonâ€™t be any less fierce than it always is, but says he canâ€™t affect what his competitors do.

â€œ(Everyone will be) Fit, fast and willing, as will I. I can only focus on what I can do day in and day out.â€

What about concerns over the Zika virus?Â Some athletes, mostly the worldâ€™s top golfers, have decided not to go to the Games because of the outbreak. Some athletes have chosen to freeze their sperm as a precaution – British long jumper Greg Rutherford was one of the first to make the decision.

But as for Murray: â€œI donâ€™t have many concerns, I donâ€™t think of it much really,â€ he says.Â Instead, heâ€™s taking a positive look at things with all the issues surrounding the Games.

â€œI havenâ€™t heard any of the negative things apart from the water being a bit dodgy. I have been to Rio in 2015 for the test event and found it to be a great place. I am sure it will be great and I am excited to make memories and give my best for the sake of South Africa and my sponsors,â€ says Murray.