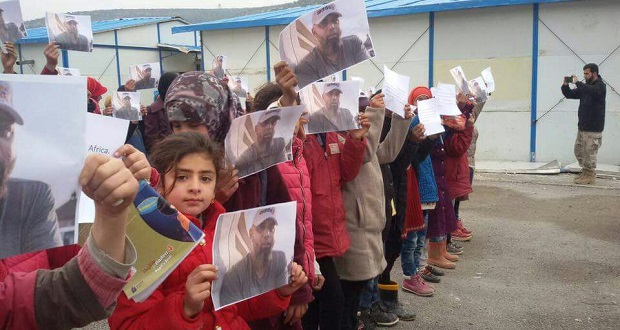 On Tuesday, 10 January 2017, Shiraaz Mohamed, 38-year-old photojournalist from Johannesburg, was kidnapped after he tried to leave Syria through the Turkish border with members of relief organisation, Gift of the Givers.

He was in Syria for a photo project based in and around the Gift of the Givers hospitals. Since his kidnapping, the aid organisation has been in touch with the Turkish government in an attempt to find him. One of the members of Gift of the Givers’ medical team, Ahmad Ghandour, was summoned to meet with members of An Nusra (now Fath Al Sham), ex Al-Qaeda affiliates, to answer questions around Mohamed’s disappearance. Ghandour explained to them that Mohamed was his friend and that he was set to take Mohamed to visit Aleppo but was stopped by Gift of the Givers, out of safety concerns. Ghandour expressedÂ the annoyance felt by his organisation at the incident, and received an undertaking that An Nusra would assist in the search for Mohamed.

Speaking to The Daily Vox, Shirley Brijlal, Mohamedâ€™s partner, said that there have been no leads on Mohamed’s whereabouts. The last time she spoke to him was on Tuesday afternoon at 3:17pm. At the time, he was on his way to the border and was talking to Brijlal over Whatsapp, when he stopped replying.

â€œSomething happened to him between that 3:17 and the quarter to four. In that half an hour, there was a trouble. Because he never puts his phone off unless there is a problem, or his phone is taken away from him,â€ she said.

Brijlal said that his family is praying for his safety. â€œWe are devastated, I mean you wake up crying and then you have to stop yourself,â€ she said.

She also spoke how Mohamedâ€™s mother is dealing with his kidnapping. â€œSheâ€™s such an amazing woman, sheâ€™s devastated. Like I said itâ€™s been a rollercoaster, but sheâ€™s, what can I say, saddened beyond words,â€ said Brijlal.

Speaking more personally about him, Brijlal said that Mohamed loves photography and that he is just a big softy. â€œI can tell you this, Shiraaz is a good guy, heâ€™s very emotional, heâ€™s a big guy, heâ€™s a teddy bear,â€ she said.

Since his disappearance, tributes have been coming in from his friends and colleagues.

Praying that #ShiraazMohamed returns safely to SA. This was the last photo he posted on 7 Jan pic.twitter.com/3R0Ten0HLb

Over the weekend, medical staff and residents protested outside the Gift of the Givers Ar Rahma Hospital in Darkoush, Syria, calling for Mohamedâ€™s release. Businesses in the area also closed their shops for a while on Sunday to show support and express disgust at Mohamedâ€™s kidnapping.

The medical staff and residents of Darkoush have demonstrated outside the hospital in support of Shiraaz. pic.twitter.com/A5FqeSwi7c

In a refugee camp near the hospital where Mohamed used to visit, children held placards calling for his release.

Kim Ludbrook, head of European Pressphoto Agency Africa, spoke to The Daily Vox about having worked with Mohamed. â€œHeâ€™s an extremely good student. I mean he was just so passionate, keen to learn, humble. Really just a pleasure to be around,â€ said Ludbrook.

He is also extremely concerned for Mohamedâ€™s safety. â€œWhat it has shown me in the last 48 hours is the amount of support he has and how much is being done to get him released. Just like everyone else Iâ€™m praying for his safe return,â€ he said.

Featured image by Imtiaz Sooliman/Gift of the Givers